By Amy Lamare on November 10, 2014 in Articles › Entertainment

Northern Ireland resident Margaret Loughrey was going through some hard times. She was out of work and living off unemployment benefits that amounted to just $100 per week. Thankfully, those tough times did not stop her from buying a lottery ticket one day on her way home from her most recent job search.

The 48-year old woman from the town of Strabane in County Tyrone had gone to the local job center to see about a job she was interested in. On the way home, she popped into the local SuperValu store and bought the lottery ticket that would forever change her life. She won the biggest jackpot to date in Northern Ireland by hitting five numbers and two Lucky Stars for $46 million. Making the win even more remarkable is the fact that due to her out of work status, Loughrey usually couldn't even afford to play the lotto all that often. That day, she had a few extra pounds in her purse and on the spur of the moment she bought a ticket with the numbers 19, 23, 27, 42, and 44 and the Lucky Stars 3 and 5.

Those were the exact numbers drawn. 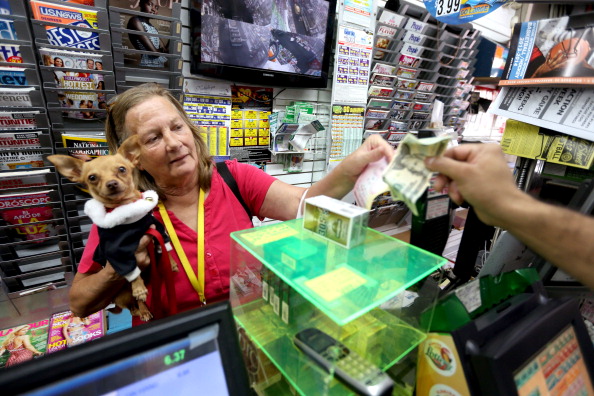 Many people would run out and go on a spending spree with an unexpected windfall like that. But what the single woman who lives in a modest two bedroom has done with her fortune is nothing short of inspiring.

As the shock of her win wore off, it became clear to Loughrey just what she had to do. Although Loughrey now has the means to live anywhere in the world, she plans to buy a bigger home in her current town. After helping out her family and friends financially, her next planned extravagance is to take some nice vacations. After that, all of her plans are altruistically aimed at her town and the people in it.

Loughrey plans to give all but $2 million of her winnings away! Loughrey wants to, in her own words, "make a lot of people happy."  She plans to revitalize the town of Strabane, transforming it into a destination for tourists and creating jobs for some of the approximately 17,000 residents.

She said: "I know what it's like to have nothing…that's why I'm giving it away – I can't miss what I never had."

Loughrey has already made a dent in her pledge to rebuild her town by donating half of her winnings to charity. She purchased the historic 62-acre Herdman's Mill for $2 million and is in the process of reconstructing and renovating it into a leisure and tourism destination.

She also purchased the town's vacant 22-acre business park and had hoped to create 80 jobs by turning it into a craft village. Those plans were stalled by the local business development agency's zoning laws, which focus on export businesses.

Loughrey, who by her own admission was unemployed for half of her adult life and working for minimum wage at the times when she was employed, has ambitious plans for her town. She is already the director of nine companies. Because she's experienced such hard times, she is determined to use her good fortune to help others through their tough times.

Loughrey is an admirable person. Unfortunately, as the saying goes, no good deed goes unpunished. A global cyber scam is now using her name to fuel an online con. Emails sent to people around the world claim that Loughrey has decided to give away $1 million from her charitable organization if you'll just give her your full name, age, phone number and band account information. They also provide a link to news reports of the jackpot win before signing the correspondence, "Sincerely, President Margaret Loughrey". This is a classic "Nigerian Prince" type scam designed to bilk money out of clueless people and steal their identities.

Fortunately, this heartless cyber crime isn't stopping Loughrey from helping the people of her town.