Well it's only fitting that Novak Djokovic and Roger Federer are the only two professional tennis players to make the Celebrity 100 this year. The two have been battling it out for their sports records for years. Currently, Djokovic is winning that race, but if Federer wins a tournament he could be back on top. While Djokovic has currently earned more in prize money he still hasn't earned more actual trophies than Federer. However, the bulk of Djokovic's 14 grand slam titles were won after 2010, while 75 percent of Federer's major victories happened before that point in time, and as prizes in tennis have continued to go up since then, the financial advantage is Djokovic's.

Of course that is just on-court earnings. When it comes to endorsements, the advantage (see what I did there) is all Federer's. The Swiss tennis star is still far ahead of Djokovic, with an estimated $65 million a year from his endorsement deals, alone. Federer has contracts with Credit Suisse, Rolex, Moet & Chandon, and more. Last year, Federer dropped longtime partner Nike for a 10-year, $300 million deal with Uniqlo. Djokovic, earns about $22 million a year from his own personal endorsements, the biggest being his deal with clothing company Lacoste, which is worth eight figures annually, including bonuses. 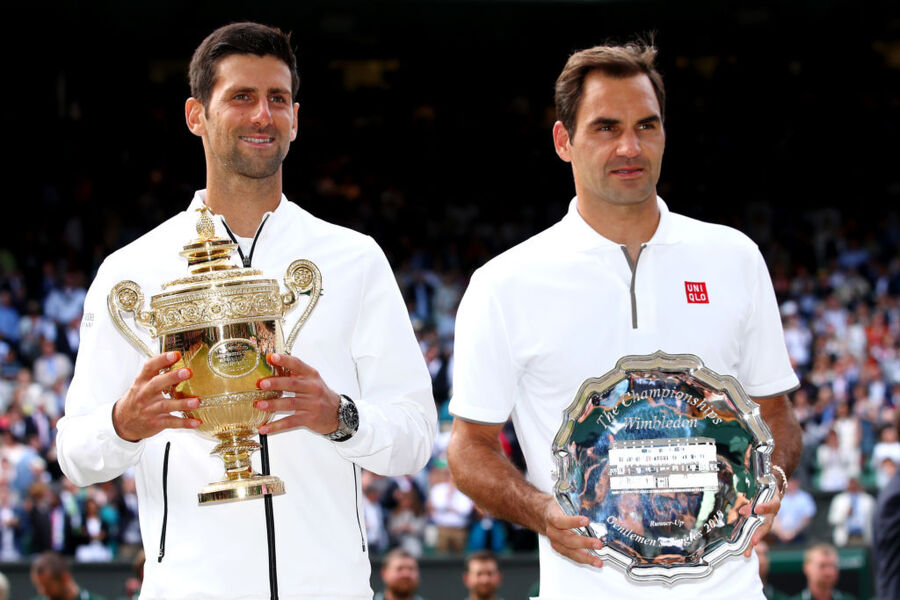 Djokovic came in at #55 on this year's Celebrity 100. He won three consecutive Grand Slam titles before losing in the semifinals of the 2019 French Open. His $132 million in career prize money is the highest of all time. His 15 Grand Slam titles ranks third behind Roger Federer and Rafael Nadal. The 32-year-old Serbian tennis player is currently ranked No. 1 in the world. Djokovic has 16 Grand Slam singles titles, five ATP Finals titles, 33 ATP Tour Masters 1000 titles, 12 ATP Tour 500 titles, and has held the No. 1 ranking for over 250 weeks. He's won a record seven Australian Open titles, five Wimbledon titles, three U.S. Open titles, and one French Open title. With his victory at the 2016 French Open he became the eighth player in history to have the Career Grand Slam and the third man to hold all four major titles at once, the first since Rod Laver in 1969.

The Swiss tennis player came in at #11 on the list of the 100 highest-paid celebrities in the world. Federer is largely considered the best tennis player of all time. In 2018, he briefly returned to the #1 ranking in the world, becoming, at 37, the oldest man in the world to do so by more than three years. Federer is currently ranked #3 in the world. He's won 20 Grand Slam singles titles – the most in history for a male player – and has held the No. 1 ranking in the world for a record total of 310 weeks, including 237 consecutive weeks. He turned pro in 1998 and was continuously ranked in the top 10 from October 2002 to November 2016. He has won a record eight Wimbledon titles, six Australian Open titles, five (consecutive) U.S. Open titles, and one French Open title. He is one of eight male tennis players to achieve a Career Grand Slam. Federer has reached a record 31 men's singles Grand Slam finals, including ten, consecutively, from the 2005 Wimbledon Championships to the 2007 U.S. Open. He has also won a record six ATP Finals, 28 ATP Tour Masters 1000 titles, and a record 23 ATP Tour 500 titles. Federer is the only tennis player, after Jimmy Connors, to win 100 or more career singles titles and to log 1,200 wins in the Open era.

Federer has won $124 million in prize money in his career on court and $86 million in off court earnings annually – the best of any professional athlete, thanks to the global appeal of tennis, which allows sponsors like Mercedes, Uniqlo, and Gillette to use him in ads in Asia and Europe as well as the U.S. Football and baseball players don't have this sort of global recognition and are limited to mostly U.S. advertising. His global recognition is on par with David Beckham, Michael Jordan, and Lionel Messi. The Roger Federer foundation has raised more than $40 million and educated more than one million children in Africa since its launch.