Which TV Actors Have Earned $1 Million Per Episode?

The cast of "The Big Bang Theory" not only gets to work on one of the best sitcoms in decades, but they are also set to be some of the highest paid actors of all time. The three main cast members Jim Parsons, Johnny Galecki, and Kaley Cuoco spent their hiatus negotiating enormous raises for their eighth season salaries.  Sheldon, Leonard, and Penny will receive $1 million per episode for the next three seasons with the potential to earn $100 million each if "The Big Bang Theory" stays on their air for two more seasons. This is an enormous  jump from the $350,000 per episode they had been earning. This also puts Galecki, Parsons, and Cuoco in a very exclusive club—the million dollar TV salary club.  The cast of Friends earned $1 million per episode in their final season, but they aren't the only ones to bring home such crazy cash 22 (or so) weeks of the year.

However, it is worth mentioning that while many want to (and have) compared "The Big Bang" salary deal to "Friends" in 2002, the truth is $1 million was worth more back in 2002.  Adjusted for inflation, $1 million today was $750,000 in 2002. To earn as much as Ross, Rachel, Monica, Chandler, Joey, and Phoebe did, Penny, Sheldon, and Leonard would have to earn $1.3 million in today's dollars.  But let's face it, it is still an insane amount of money. Let's take a look at the other actors and actresses who are members of the Million Dollar TV Salary club. 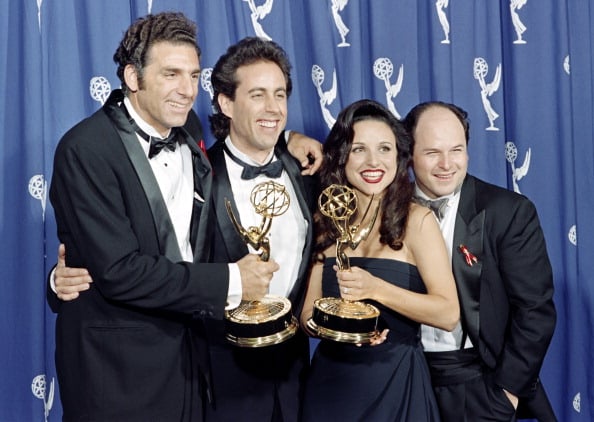 Way back in 1997, Jerry Seinfeld became the first person to take home $1 million an episode for the final season of "Seinfeld."   This was HUGE news 17 years ago. But Jerry could have earned even more if he had wanted to bring "Seinfeld" back for a 10th season.  Reportedly, the network offered Seinfeld $5 million an episode to do one more season.  Seinfeld is the only actor to appear in every episode of the show. His co-stars – Jason Alexander, Julia Louis-Dreyfus, and Michael Richards, were each paid $500,000 per episode at the end of the series.

Tim Allen made a staggering $1.25 million per episode for the final season of "Home Improvement."  Have you ever seen that show? It is terrible!  The sitcom was Allen's first acting gig. He starred as a former salesman turned host of a home improvement show.  "Home Improvement" ran for eight seasons.

It's hard to remember now, but back in the 90s "Mad About You" was a hot property with great ratings and a devoted fan base.  Helen Hunt won the Emmy for  Best Actress in a Comedy four years in a row (1996-1999). The show's stars, Paul Reiser and Helen Hunt each received $1 million per episode for the eighth and final season of the long running series. That last season carried a 22 episode order, earning Hunt and Reiser $22 million in one season.

During the early years of "Friends" the actors discovered that they were all being paid different salaries ranging from $20,000 to $40,000 per episode.  Before the third season the actors banded together and negotiated raises as a group. They were then making $75,000 per episode. Every year Courtenay Cox, Jennifer Aniston, Lisa Kudrow, Matthew Perry, Matt LeBlanc, and David Schwimmer negotiated as one and their salaries increased exponentially until, in the ninth and tenth seasons, each of the six main cast members were earning $1 million per episode.  Over the course of 10 seasons, each cast member of "Friends earned" $88.4 million in salary.

Kelsey Grammer played Dr. Frasier Crane on "Cheers." He was supposed to play that character for just six episodes.  Instead he managed to play the neurotic shrink for 20 years. His "Cheers" spinoff "Frasier" was one of the most successful TV spinoffs in history.  The sitcom ran for 11 seasons, collecting 37 Emmy Awards during its long run.  During the last two seasons of the Seattle based show, Grammer earned $1.6 million per episode for a total gross of just under $77 million over those two seasons.

James Gandolfini's salary negotiations dragged on for so long they delayed production and threatened to shut down the HBO hit "The Sopranos."  As the fifth season was about to begin shooting, Gandolfini filed a breach-of-contract lawsuit against HBO for, essentially, not giving him the $1 million per episode he'd been seeking. HBO countered with a $100 million lawsuit and production on the mafia drama was put off for two weeks. Finally, the show's executive producer stepped in and Gandolfini got his $1 million an episode –doubling his salary – provided he stick around for at least two more seasons.

Ray Romano for "Everybody Loves Raymond" (2004)

Ray Romano made an astounding $1.7 million for the final two seasons of the long running sitcom "Everybody Loves Raymond."  The show centered on Romano and his dysfunctional family and it was a huge hit for CBS for a decade and is making all of its cast tons of money in syndication.

Charlie Sheen made $1.8 million for the last season he was on "Two and a Half Men." Of course that was the year of Tiger Blood and Winning and all the things that went along with his epic meltdown. As a result, that season was cut short. Sheen appeared in 16 episodes of the improbably long running sitcom. For his trouble, he earned about $30 million. Sheen holds the Guinness World Record for Highest Paid TV Actor Per Episode.