By Amy Lamare on November 2, 2014 in Articles › Entertainment

Boxers not only chase titles in their weight division, they also covet the title of Pay-Per-View King. Boxing debuted as a pay-per-view cable event in the 1980s and the popularity of a particular match is a barometer for a boxer's influence on the viewers.

The first pay-per-view boxing match was the "Thrilla in Manila" featuring Muhammad Ali and Joe Frazier—and ever since that time the experience of paying to watch a match has become a tradition for boxing fans around the world. Friends and family gather together for pay-per-view parties to watch their favorite (and often not so favorite—it is fun to root against someone too) boxers duke it out for a fee.

The current king of pay-per-view is boxing superstar Floyd Mayweather, Jr. In his last three fights, the boxer has made more money than any other boxers has in his entire career. Mayweather is also involved with the award-winning HBO series "HBO 24/7" which gives fans a behind the scenes look into the final weeks in a boxer's life as he prepares for a fight. Mayweather may be the latest King of Pay-Per-View, but there have been many that have held that title before him. Let's take a look at the top 10 pay-per-view boxing matches.

This 1996 fight was Frank Bruno's last and Mike Tyson made it memorable. The two first fought each other in 1989. Tyson stopped Bruno in the fifth round. After that, Bruno won eight of his next nine fights before he got a chance at a rematch with Tyson in 1996. Bruno's opportunity for revenge proved to be futile as Tyson disposed of Bruno even faster this time. The fight was stopped in Round 3.

It is easy to forget that George Foreman was once a formidable boxer now that he's become synonymous with his Foreman grills! In 1991, Foreman was in the midst of his second boxing comeback. His return to boxing was successful—he won 24 straight fights and got a shot at the then Undisputed Heavyweight Champion Evander Holyfield. Foreman was 42-years old, and from the start, the younger, faster Holyfield dominated the veteran boxer. However, Foreman remained on his feet until the end of the last round to make sure Holyfield really earned his win. Holyfield was guaranteed $20 million to show up, Foreman $12.5 million. 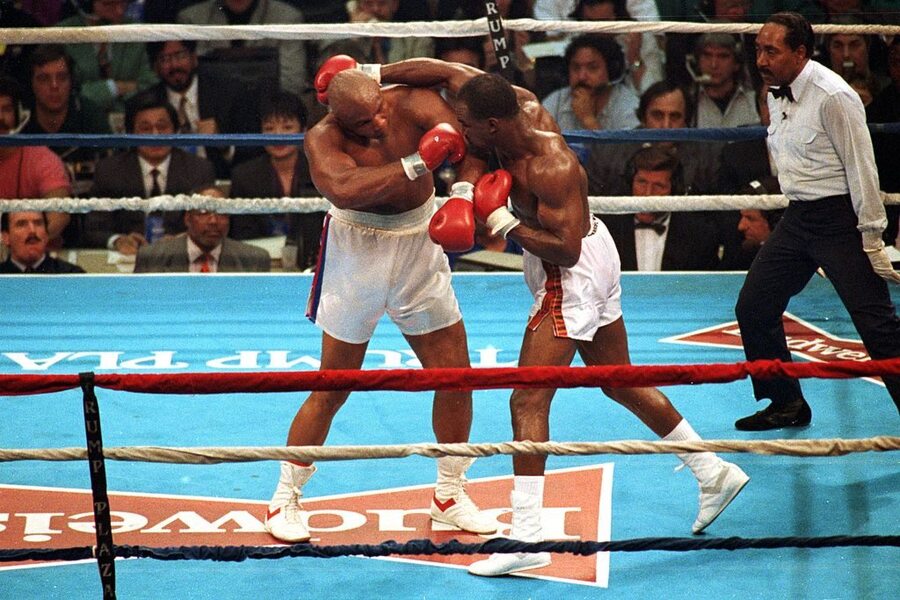 Oscar De La Hoya and Felix Trinidad were both undefeated coming into this fight. This was expected to be a close fight. De La Hoya dominated the first eight rounds before Trinidad took control. At the end of the fight, the judges' scorecards revealed a majority decision for Trinidad. This result is still one of the most controversial decisions in boxing.

Floyd Mayweather made a return to boxing in 2009. He wanted a bout with Manny Pacquiao, but was not able to make that happen, so he turned to welterweight star "Sugar" Shane Mosley. The 12-round fight was soundly in Mayweather's control. This fight was at the time the second highest selling non-heavyweight pay-per-view fight in the history of boxing, generating $78.3 million. Mayweather earned $30 million for the fight. Mosley earned around $10 million. 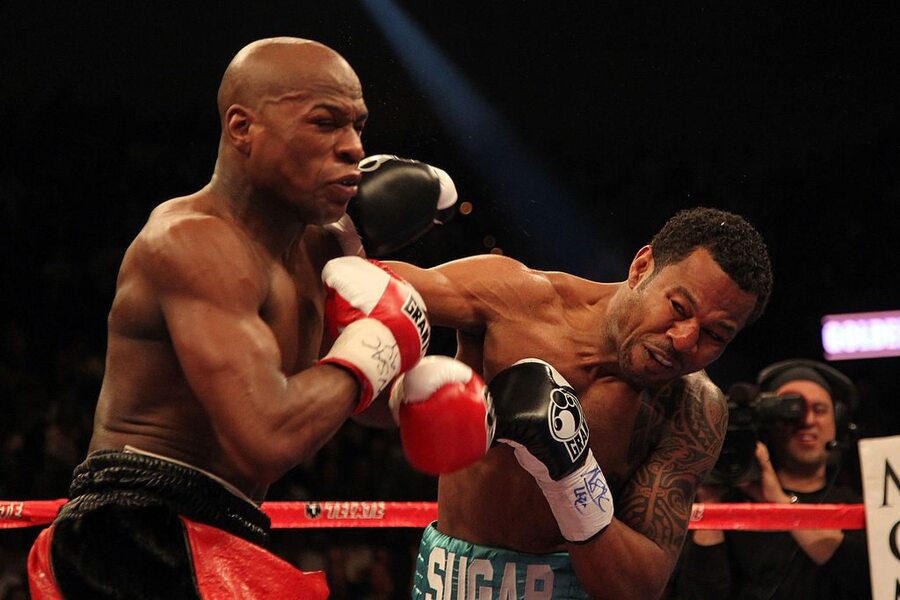 This was the third meeting of Manny Pacquiao and Juan Manuel Marquez. It was supposed to be the fight that would definitively decide who was the better boxer. Pacquiao first met Marquez in the ring in 2004 when the two were still in the featherweight division. For the first time in his career, Marquez found himself knocked down—three times in the opening round. In 2008, a match called "Unfinished Business" found Pacquiao victorious again. Both those wins were not without controversy and Marquez's fans felt he had dominated both bouts. The two once again agreed to a fight in 2011. Pacquiao won this fight unanimously, to the surprise of the audience, as it appeared, once again, that Marquez had dominated. Manny earned $30 million for the fight, Marquez earned $5 million.

When this fight took place, it had, at the time, the largest audience to ever view a boxing event. Fans in more than 90 countries bought this pay-per-view event to see the return of Iron Mike Tyson after his release from three years in prison on rape charges. Mike Tyson faced an up-and-coming boxer named Peter McNeeley who had a record of 36 victories, 30 of them by way of knockout. It was thought that McNeely would start the fight aggressively, laying some damage on Tyson early in the bout. McNeeley even went so far to say that he would wrap Tyson up in a "cocoon of horror." Tyson didn't earn the nickname Iron Mike for nothing and he was able to withstand the early onslaught before knocking McNeeley down twice in the first round. McNeeley's manager rushed into the ring to put a stop to the fight after the second knockdown, which resulted in a loss by disqualification for McNeeley. Tyson earned $25 million for the fight, McNeeley earned a scant $540,000.

6. Mike Tyson vs. Evander Holyfield I

There was a six year build up to this Mike Tyson vs. Evander Holyfield fight. The fight had been originally scheduled for 1990, but didn't happen. Then in 1991 and 1992, first a rib injury and then his prison sentence, kept Tyson from being able to fight. Then, in 1996 when they fight got scheduled, it was appropriately called "Finally." Holyfield was, at the time, largely considered to be washed up after losses to Riddick Bowe and Michael Moorer in two of his last four fights prior to this event. He was a huge underdog. Holyfield dominated Mike Tyson for 11 rounds before the referee stopped the fight, giving Holyfield the win, a stunning upset, via technical knockout.

This fight made nearly $107 million on the number of pay-per-view units sold alone. One factor in this huge amount was the brawl at the press conference where Tyson attacked Lewis. Following the altercation, a reported said that Tyson should be put in a straight jacket. Well, Iron Mike didn't like that much and he responded with one of the most epic, profanity-filled tirades in sports history. Lewis wore down Tyson round by round, finally ending the fight with a victorious right cross to Tyson's jaw in the eighth round.

The infamous "Bite Fight" will go down in history as possibly the most bizarre bout in the history of boxing. In the third round, Tyson bit off a piece of Holyfield's right ear. The ringside doctor determined that Holyfield was able to keep fighting, so the bout went on. Tyson then bit Holyfield's left ear, causing the injured boxer to back away desperately. Tyson was disqualified. As he made his way into the locker room, a fan threw a water bottle at him. Tyson then climbed into the stands and taunted the crowd. The Nevada State Athletic Commission revoked Tyson's license to fight. He was also fined $3 million. Holyfield earned $35 million for the fight, Tyson took home slightly less because of the fines and controversy.

In September 2013, Floyd fought Saul "Canelo" Alvarez. This fight was special because by this point in time, Floyd was no longer under contract with a promoter. He had previously been under contract with Bob Arum and then had a co-promoting partnership with Oscar De La Hoya. But by now, Floyd was calling all of his own shots. Instead of simply being paid to show up, Floyd organized every aspect of the event and fronted all the costs. When it was all said and done, 2.25 million people paid $69 to watch Floyd defeat Canelo by decision after the full 12 rounds. Floyd's payday? A record-smashing $75 million. Of that figure, $41 million was paid up front, and another $34 million came from the PPV back end.

This Cinco de Mayo fight was called "The World Awaits" and featured a matchup between " Golden Boy, " Olympic champion De La Hoya and "Pretty Boy" Floyd. On the night of the fight, 12 rounds of well matched, bell-to-bell action ended in a split decision in favor of Mayweather. The fight generated  record-setting $136 million in PPV revenue. De La Hoya took home $52 million for the fight, which was the highest purse in boxing history up to that point. And he lost! Mayweather took home $25 million for the fight. 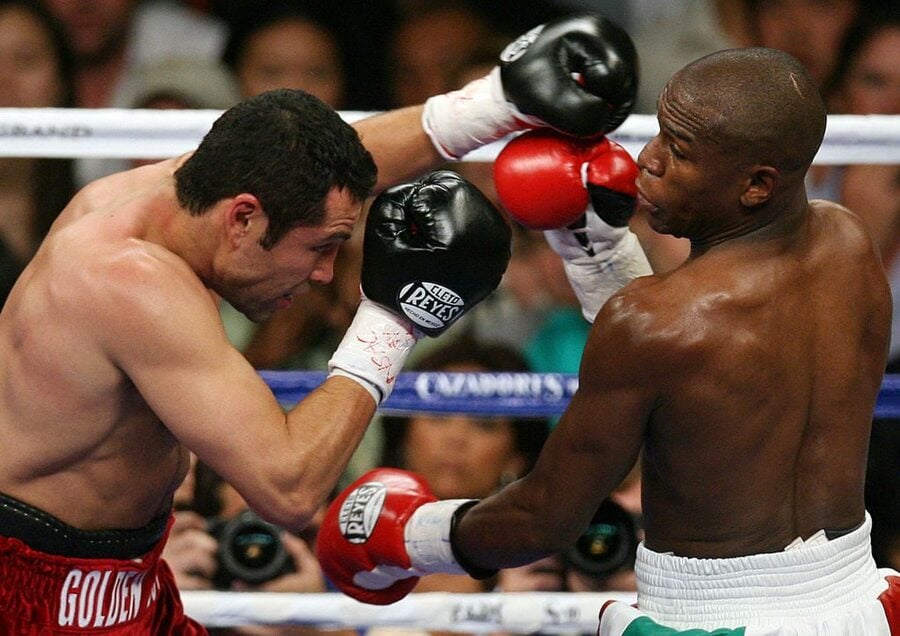 As you probably could have guessed, Mayweather Vs Pacquiao absolutely destroyed the record for most Par Per View buys in history. The fight, which many felt was extremely disappointing in terms of actual fight action, generated an estimated $600 million in overall revenue. Floyd earned an estimated $250 million from the bought, with Pacquiao getting around $150 million.