From IPO To Complete Liquidation In 268 Days. How Pets.com Became The Biggest Disaster Of The Dotcom Bubble

Many lessons were learned during the original dot-com bubble. Business plans that were considered acceptable in the later 1990s and early 2000s would be treated as completely ludicrous by entrepreneurs and venture capitalists today. That first wave (and eventual crash) of dot-com craziness was like the modern wild, wild, west. A hundred new e-commerce sites popped up every day promising to change the world and make its investors unimaginably wealthy. By 2002, the vast majority of these long-forgotten companies had been wiped off the face of the earth. There are also a handful of companies whose endings were so embarrassing, on such a public scale, that they will be forever etched in our collective memories. Companies like Webvab, Kozmo, theGlobe.com and eToys immediately spring to mind.

But out of all the companies that exploded during the dotcom bubble, Pets.com will probably go down in history as the most disastrous of them all. Shockingly, the company went from IPO to liquidation in just 268 days. And with its implosions, more than $300 million of investment capital evaporated and roughly 300 people lost their jobs. This is the story of Pets.com… 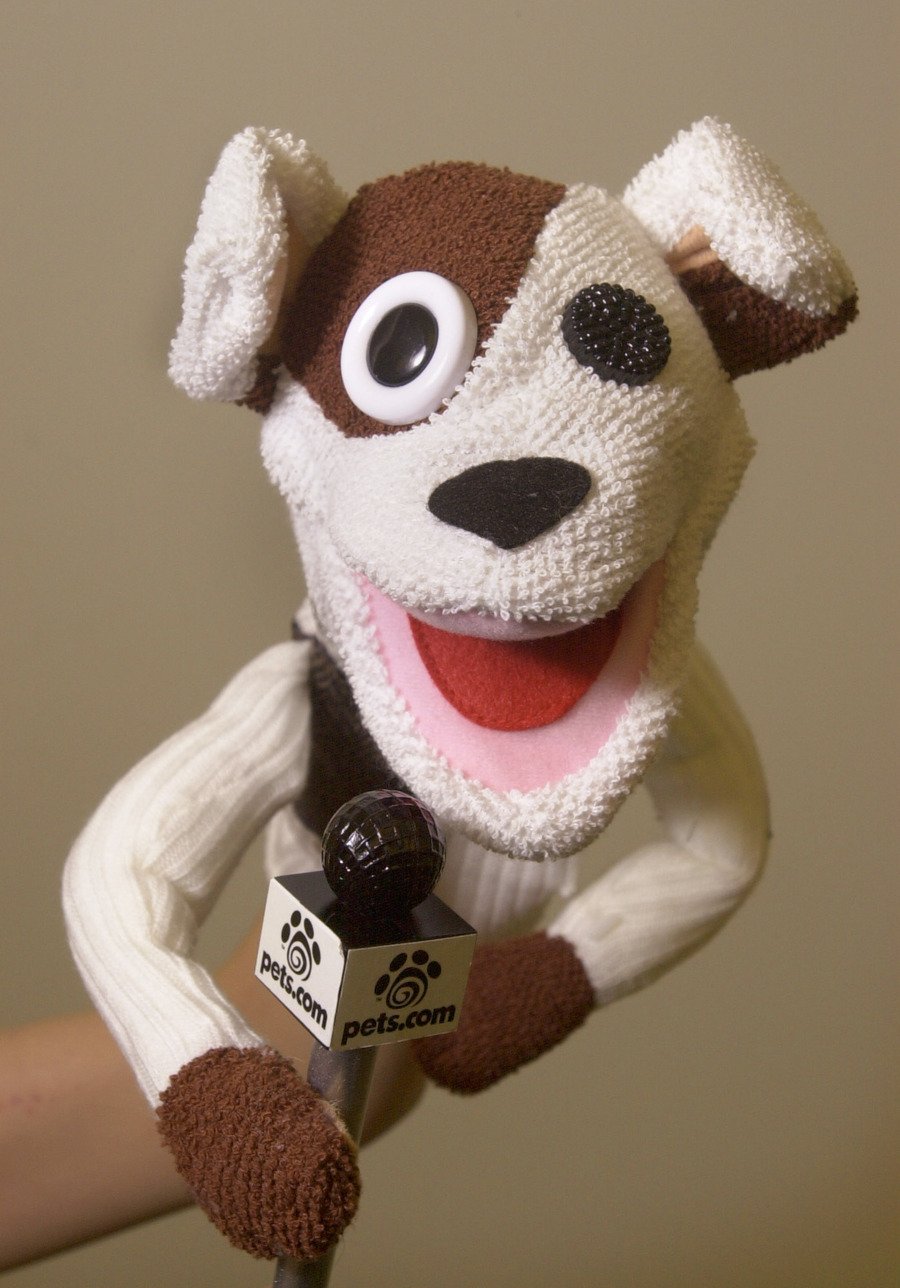 Pets.com launched with such promise. And it made sense. Of course selling pet food, pet care, pet toys, and pet accessories online made sense. Pet owners needed this stuff! Why not deliver it right to their door? They had a commercial in the 2000 Super Bowl and we know how much those cost. Plus, it had a super cute and charming mascot! How could it not succeed?

Pets.com was founded and launched by Greg McLemore in August 1998. The site and domain were then purchased from McLemore in early 1999 by Hummer Winblad, a leading venture capitalist, and Julie Wainwright, who was installed as CEO. Tasked with taking a start up from a dream to a national brand, Wainwright threw everything she had at it. And by "everything" we mean tons and tons and tons of cash.

Amazon.com was involved in Pets.com's first round of venture funding. Jeff Bezos and Amazon purchased a 54% majority stake in the company. Wainwright said at the time that the Amazon funding of Pets.com was "a marriage made in heaven". And so it seemed. After all, one thing Amazon knows how to do is move product and manage fulfillment centers. Pets.com could have, and should have, taken note of how Amazon handled its business.

Pets.com started out with a regional advertising campaign in 1999 using a variety of traditional media outlets. They had spots on TV, in print, on the radio, and eventually even a Pets.com magazine. The campaign started in five cities and by Christmas that year had expanded to 10 cities. The focus of their campaign was their mascot – a sock puppet made to look like a dog.

Pets.com's ad campaign and mascot were created by the San Francisco office of TBWA\Chiat\Day, the firm that had recently given the world the Taco Bell Chihuahua ads. (Yo quiero Taco Bell, anyone?) The mascot they designed for Pets.com was a doglike sock puppet holding a Pets.com branded microphone in its paw. They hired the actor Michael Ian Black to voice the mascot and he quickly gained fame in 1999 and 2000. In fact, the Pets.com sock puppet had near cult status, making appearances on "Good Morning America", "Live with Regis and Kathie Lee", and even "Nightline". The sock puppet even had its own balloon in the 1999 Macy's Thanksgiving Day Parade.

All seemed to be proceeding exactly as Wainwright, other executives, and their investors had planned. On top of stellar advertising and branding, the Pets.com website design was solid, easily navigable, and even won a few awards.

In January 2000, Pets.com made a biiiiiiiiiig purchase – a Super Bowl ad that cost the fledgling company $1.2 million dollars. The spot introduced the U.S. to the company's answer as to why pet owners should shop online: "Because Pets Can't Drive!" USA Today's ad meter ranked it the #1 spot in that year's Super Bowl. Pets.com had achieved their goal. They were, at least briefly, a part of the national conversation.

The following month, in February 2000, Pets.com went public under the NASDAQ stock symbol IPET with a share price of $11.00. It briefly topped $14 a a share, but unfortunately, it was all downhill from there.

Pets.com had tremendous success in building its brand recognition. However, what it didn't know, and really should have known before it took in $300 million in other people's money, was whether an actual market for their product even existed. The founders, venture capital owners, and CEO Julie Wainwright all failed to conduct a basic due diligence on their sector of the online retail landscape. Let me make that clear – No independent market research preceded the launch of Pets.com to test its basic viability and sustainability in the marketplace.

In the company's first fiscal year – February to September 1999 – Pets.com took in revenues of $619,000. That might not sound too terrible, right? Well, also keep in mind that during that same year the company spent $11.8 million dollars on advertising alone. That's doesn't include the salaries and benefits to 300+ employees.

The fact is, Pets.com lacked a business plan that worked or even made common sense. The company lost money on every sale it made even before the exorbitant cost of their advertising campaigns… and the reason for this failure is astounding.

Pets.com was selling its products at one-third of the market price it paid to obtain the inventory. And they did this willfully, thinking that by offering discounts and free shipping, they'd build a loyal customer base quickly. While sites like Zappos.com have successfully used this strategy, shoes don't cost much to ship. What the management of Pets.com didn't take into consideration is just how much it cost to ship 20 pound bags of dog food and cat litter, crates for pets, cans of pet food, and other heavy items. As their business plan was written, it would be impossible for Pets.com to become profitable in an industry (pet supplies) that typically only has profit margins of two to four percent.

Now, take into consideration the culture of startups at the time. It was common for companies to provide fully stocked kitchens, catered meals, games and toys and gadgets to play with on breaks, group outings, parties, gym memberships, and other perks designed to lure top talent and keep them happy that, let's face it, cost significant sums of money. And Pets.com did not skimp here.

But it gets worse! The powers that be at Pets.com didn't expect to offer deep discounts and free shipping forever. Oh no, they had what was an even worse plan – they planned to move existing customers to higher profit margin purchases. Now I don't know about you, but I have a dog, a chocolate Labrador Retriever, and she is fed the same thing day in and day out because when you change up a dog or cat's food all of a sudden… it gets messy. Use your imagination.

It seemed clear that the people running Pets.com didn't have any real experience with actual pet owners or any familiarity with pets and their habits. During the company's second fiscal year, the company sold merchandise for 27% less than cost, so even the rapid rise in sales during that year didn't help. In fact, they moved the company closer to its inevitable demise.

Furthermore, Pets.com spent a small fortune in infrastructure like the warehouses that housed their products and acted as their fulfillment centers. The management of the e-commerce company stuck by their assertions that the company just needed to get to a revenue run rate that supported their bloated infrastructure. The revenue target for that momentous moment was $300 million. At that point the company would just barely break even on their expenditures. They thought it would take around four years to hit that mark.

Now, we all know what happened in 2000. The NASDAQ crashed and the dot-com bubble burst. By that fall, the writing was on the wall and the board realized there was no way they'd be able to raise the capital they needed to continue to do business. The management team and board tried desperately to save the company.

Unfortunately there were no lifelines to be found and Pets.com announced that they were closing their virtual doors on November 6, 2000. The share price had fallen from its IPO price of $11 in February to just $0.19 the day the company ceased operations. In total, Pets.com went from IPO to complete liquidation in just 268 days. That makes it one of the shortest lived public companies in history.

The management of Pets.com were adept at marketing and branding and not much else. Sales rose dramatically but because of their terrible business plan and bloated infrastructure the company lost tons of money on nearly all of its transactions. When Pets.com ceased operations, $300 million of investment capital, raised from Venture firms and the public markets, evaporated.

Where Are They Now?

The Pets.com management stayed on board through the company's liquidation. She was given $50,000 as a performance bonus on top of her normal $165,000 bonus, and a severance package of $165,000. After shutting down Pets.com in November 2000, her husband filed for a divorce. Wainwright has said that this was a very difficult time in her life. She went on to found SmartNow.com, which is now a defunct website. She wrote the book "ReBoot: My Five Life-Changing Mistakes and How I Have Moved On," which chronicled her humbling experiences at Pets.com and SmartNow.com. Julie Wainwright is the current CEO of TheRealReal, a luxury consignment website.

While the offer from PetSmart was declined, the domain was sold to PetSmart for an undisclosed price.

The sock puppet had tremendous popularity during its heyday but as the company was collapsing, it became the ultimate symbol of dot-com excess. In 2001, E-Trade ran a Super Bowl commercial that shows a chimpanzee riding a horse through a ruined dot-com landscape. The chimp came across a company named eSocks.com that was being demolished and cried when the sock puppet lands at his feet. Bar None, Inc., an auto loan firm bought the rights to the sock puppet for $125,000, rebranded the microphone to say 1-800-BAR-NONE, and gave the puppet the slogan "Everybody deserves a second chance".

Sock puppet dolls can currently be purchased on eBay starting at about $5.