By Paula Wilson on February 5, 2014 in Articles › Entertainment

It's Oscar season.  In just one month, a whole new crop of performers and technicians will be able to add that extra little note about being an Oscar winner to their resumes, webpages, and future movie trailers.  When thinking about the Oscars, there are a few actors that come to mind immediately.  Tom Hanks is one of those actors.  He made history when he won two Best Actor Oscars back-to-back for his performances in "Philadelphia" and "Forrest Gump", and he is held up as one of the finest examples of a comedic actor making a successful transition to dramatic roles.  With multiple blockbusters under his belt, he has a net worth of $350 million.  You would think that with his wide-ranging career, his upbringing would have been equally colorful.  You'd be wrong.  Here's how a self-described "geek and spaz", became one of the world's most celebrated film actors. 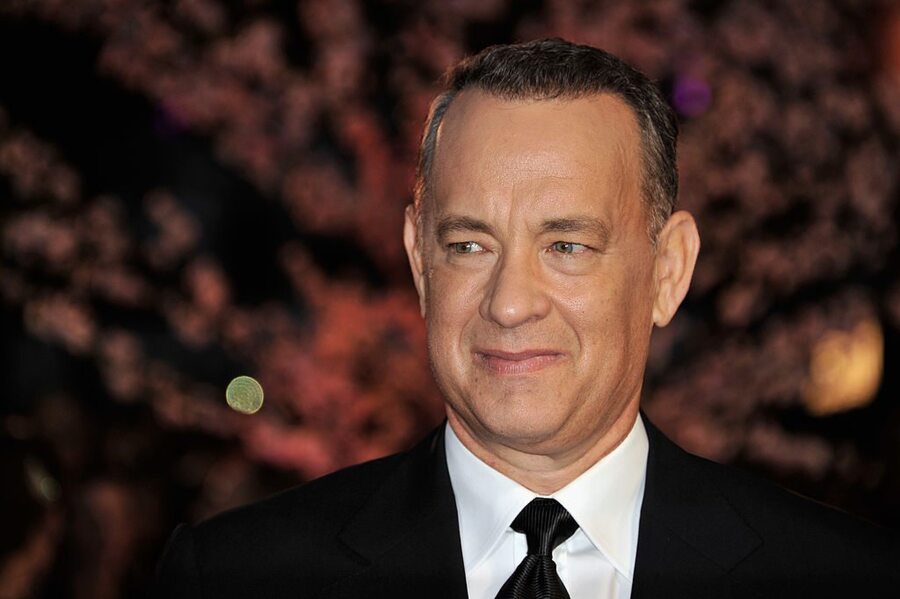 Tom Hanks was born in Concord, California, and grew up in a very religious family.  He grew up in both Catholic and Mormon households and spent most of his teenage years carrying a Bible around and evangelizing.  He describes himself as a "horribly, painfully, terribly shy" teen.  His fellow students and teachers didn't know what to do with him, and his social issues were compounded by the fact that he had a habit of yelling out comments during movies, among other eccentricities.  He was not a troublemaker and did well in school, but his socially awkward behavior made for lonely teenage years.  The place where he was most comfortable was onstage, and he appeared in plays and musicals throughout high school.

He began his college career at Chabot College and then moved on to California State University – Sacramento, studying theater at both schools.  While at Cal State – Sacramento, he began going to see as many plays as he could, trying to learn as much as possible by watching.  He was subsequently offered an internship at the Great Lakes Theater Festival in Ohio.  His single summer internship at Great Lakes turned into a three-year apprenticeship with the theater organization.  He ended up dropping out of school to focus on learning everything he could about every aspect of theatrical production, including stage management and design, while continuing to hone his acting craft.  He began to gain notice in Ohio, winning the Cleveland Critics Circle Award for Best Actor in 1978, and appearing in plays steadily.

It soon became clear that the theater "geek" of old was turning into an accomplished actor, and outgrowing the Cleveland theater scene.  In 1979, he relocated to New York to pursue a bigger theater career.  Almost immediately after making the move to New York City, he appeared in a well-received showcase production of "The Mandrake", and landed his first film role in "He Knows You're Not Alone".  In 1980, just one year after moving, he booked his first pilot.  The project was a cross-dressing comedy called "Bosom Buddies", about a pair of ad executives who dress as women in order to live in a women's only hotel.  Working opposite Peter Scolari, another theater and film actor with whom he'd worked on previous projects, "Bosom Buddies", was a moderate success, and lasted two years.  While the show didn't become a runaway hit, it did attract the attention of critics and directors alike.  After guest starring on "Happy Days", Ron Howard, contacted him about auditioning for a role in a romantic comedy he was directing called, "Splash".  Originally tapped to play a supporting role, he ended up winning the lead, and "Splash" went on to become a smash success.  He followed "Splash" up with the hit film, "Bachelor Party", and then returned to television, guest starring on "Family Ties".

By the mid-80s, it looked like Hanks was becoming the new Hollywood comedy "Golden Boy".  However, the next few years would prove difficult.  He couldn't seem to find the right projects, and he began appearing in flop after flop.  He went from dramatic roles to comedies, and everything in between, but seemed unable to replicate his early success.  Projects like "Nothing in Common", "The 'Burbs", "Joe Versus the Volcano", and "The Bonfire of the Vanities", kept him in the public eye, but were not loved by critics or audiences.  However, "Big" and "Turner and Hooch", two of his late 80s projects, saw a welcome return to form, and audiences flocked to see the two comedies.

The early 90s brought renewed success and a shift towards more dramatic work.  He starred in hits like, "A League of Their Own", "Sleepless in Seattle", and "Philadelphia".  His critically acclaimed-work in "Philadelphia" earned him a Best Actor Oscar, and definitively proved that the man who had previously been so lovable in comedies like "Splash" and "Big", had the ability to break audiences' hearts, too.  He followed his work in "Philadelphia" with the big-hearted blockbuster, "Forrest Gump".  He subsequently won a second Best Actor Oscar, becoming only the second actor to ever win consecutive Oscars.  (Spencer Tracy was the first.)  His back-to-back wins cemented his status in Hollywood, and since then, he has expanded beyond acting work, into writing, producing, and directing projects.

In addition to starring in blockbusters like, "The Green Mile", "Apollo 13", "Cast Away", and "The Da Vinci Code", he has also written, produced, and/or directed such projects as "That Thing You Do", "From the Earth to the Moon", "Saving Private Ryan", "Road to Perdition", "My Big Fat Greek Wedding", "Starter for Ten", "Where the Wild Things Are", and "Captain Phillips".  He has also voiced multiple characters in successful animation projects, including Woody in "The Toy Story" franchise and the conductor in "The Polar Express".  In a rare departure from his film life, he took some time away from Hollywood to star in a production of "Lucky Guy" on Broadway in early 2013.  He admitted to the New York Times that he felt some pressure about returning to the stage after so many years and winning a couple of Oscars.  His fears were unfounded.  While critics all agreed that the production was a little too breezy, they all felt that his performance was customarily excellent.

As of 2014, he has the distinction of being the highest grossing box office star of all time.  His movies have grossed $4.2 billion in the US and an additional $8.5 billion worldwide.  He shows no signs of slowing down, and is already committed to producing four projects in the coming year.  The Bible-toting theater geek, who used to yell out stuff randomly at the movies, seems to have very successfully transitioned his eccentricities into the characters he plays – and audiences love him for it.  Sometimes the secret to success, is to simply be who you are, without apology.  Tom Hanks would seem to be a prime example of this.