Tom Clancy Died In 2013. So Who Owns And Profits From The Jack Ryan Character Today? It's A Fascinating And Tangled Web!

By Brian Warner on September 11, 2018 in Articles › Entertainment

If you're like me, you LOVE Tom Clancy books and movies. Specifically, Tom Clancy books and movies that involve his character Jack Ryan. I'd be hard-pressed to name a better movie in history than Clear and Present Danger. The book was also fantastic. Tragically, Tom Clancy died suddenly back in 2013. That's the bad news. The good news is that his name will live forever as Hollywood continues to churn out new Jack Ryan shows. The most recent example, Amazon's new series "Jack Ryan", is simply amazing. I highly encourage you to watch all 8 episodes tonight if you haven't already. As I was plowing through the series recently, a question came to mind: Who profits off Jack Ryan today? Who owns Clancy's most famous character and other intellectual property? Turns out, it's kind of an interesting story. And while we're at it, just how much money did Tom Clancy make during his lifetime off his incredible library of work?

Tom Clancy died on October 1st, 2013 at the age of 66 in Baltimore. His illness was eventually revealed to be heart related. He had suffered a major heart attack several years prior to his death and, according to one of his longtime collaborators, Tom's heart never fully recovered.

For those of you who think it's too late for you to make a fortune, keep in mind that Tom's writing career started relatively late in life. He spent the first 15 years of his adult life working for an insurance agency founded by his wife's grandfather. He wrote novels in his spare time. Tom's big break came in 1984 when he sold his first novel, The Hunt for Red October, to Naval Institute Press for $5,000. He was 38 years old.

Naval Institute Press originally wanted Tom to cut dozens of technical details in the book because they were concerned about potentially revealing classified American military secrets. In fact, there was concern that Tom wasn't the actual author. How could this lowly insurance agent know so much about Naval submarines and Russian diplomacy? Was their secretly a different author? A former spy or Navy admiral who would be forbidden to have his identity be associated with the book?

There was no secret author. The author was Tom Clancy and he refused to remove the technical details. Tom and Naval Institute Press hoped the book would sell 5000 copies. It sold 45,000 in its initial run. After President Ronald Reagan praised the book, sales rocketed to 300,000. Within three years of releasing the book, Tom had earned $1.3 million in royalties. He quit the insurance job.

To date, the book has sold more than 5 million copies.

When it came time to do his next book deal in 1988, Clancy was paid $3 million for his next three novels. His 1988 book, Clear and Present Danger, sold two million copies in 1989 alone. It was the best-selling novel of the 80s.

Fast forward to 1997, and Penguin Putnam paid Clancy $50 million for the worldwide rights to his next TWO books. When TV rights and various other options were included, Tom's 1997 deal brought him $97 million.

To date, Tom Clancy has sold more than 100 million copies of his books worldwide.

His characters and stories also provided the inspiration for the Rainbow Six, Ghost Recon, and Splinter Cell video game series. In fact, in 2008, the French video game company Ubisoft purchased the use of Clancy's name for an undisclosed sum, believed to be north of $100 million. 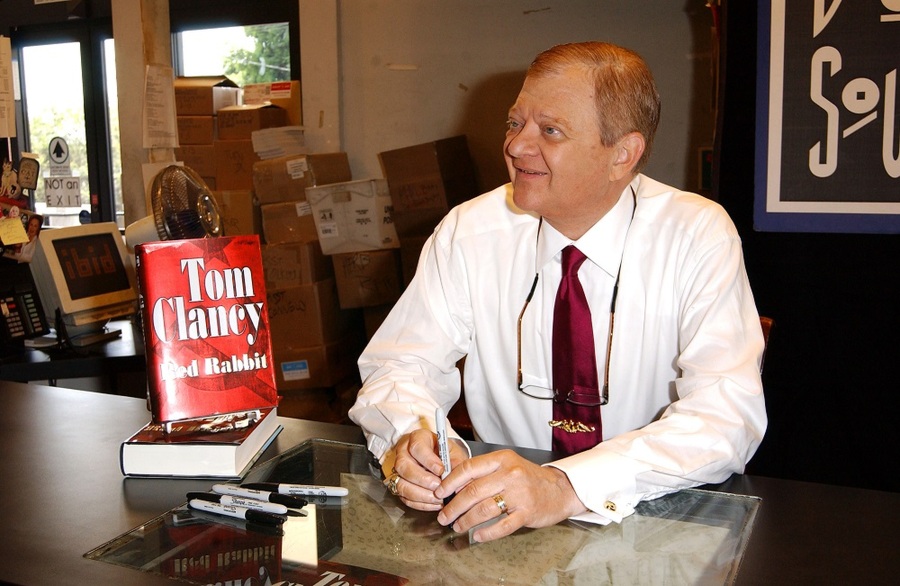 Tom owned an 80-acre estate in Maryland that featured a shooting range in the basement and housed an authentic WW2 tank which his first wife gave to him as a Christmas present. Clancy also owned a $16 million, 17,000 square-foot penthouse in Baltimore. He eventually expanded the estate to 535 acres.

In 1998 he had a deal in place to buy a portion of the Minnesota Vikings, but had to pull out in order to pay a divorce settlement to his wife of 30 years, Wanda Thomas King. As part of the divorce, Wandy received half of his 24% stake in the Orioles.

Between team valuation increases, TV deals, merchandise sales and other windfalls, that 24% combined stake in the Orioles has generated $230 million in profits to date.

Arguably though, Tom's most valuable asset was the Jack Ryan character.

Wanda and Tom had four children together. Their divorce was finalized in 1999. In addition to a large cash settlement, Tom created a new corporation to hold the copyright to his future books. He agreed to give Wanda and his children a stake in that new company. But that's not all…

Well before his first marriage hit the rocks, Tom created two companies to hold the copyrights and intellectual property for his books. The first company, Jack Ryan Enterprises LTD, was created in 1985. First wife Wanda was given 40% stake in this company. Tom owned the other 60%. The second company, Jack Ryan Limited Partnership, was created in 1992. Wanda and Tom were 50/50 owners of this second corporation.

One year after divorcing Wanda, Tom married a new woman named Alexandra Marie Llewellyn. They had a daughter, his 5th child. And before you go thinking that Alexandra was a gold-digger because she was 35-years younger than Tom, think again. Alexandra's father, J. Bruce Llewellyn, was one of the most successful African-American businessmen in US history thanks to a Coca-Cola Bottling company he owned with a group of investors. At the time of his death, J. Bruce was worth $160 million.

When Tom Clancy died, he had four adult children with his first wife, Wanda and one child with his widow, Alexandra. The terms of his will gave 80% of everything he owned to Alexandra. The remaining 20% went to his five children.

At the time of his death, outside of his Orioles investment, Clancy was worth $83 million. So 80% of that benefiteed Alexandra, 20% went to his five children.

As we mentioned previously, during his first marriage Tom placed the IP of his works into two corporations. Let's call them Corp 1 and Corp 2. Tom owned 60% of Corp 1 and 50% of Corp 2. When he died, 80% of his shares went to Alexandra, 20% went to his five children. First wife Wanda's 40% and 50% stakes remained.

We know more than we should about this legal arrangement thanks to a lawsuit that Alexandra filed in 2017. In her lawsuit, Alexandra pointed out that there was actually no specific mention of the character "Jack Ryan" when the corporations were formed back in 1985 and 1993. Therefore it was her contention that the character Jack Ryan should belong 100% to her. The lawsuit was ultimately unsuccessful but from the filings we are able to learn that when royalties are generated by the Jack Ryan character (or any other IP he owned prior to his second marriage), they get distributed as such:

1/3 goes to his estate (Alexandra)

So with that split in mind, let's say Amazon is paying $30 million to make the Jack Ryan series (which I just made up but probably isn't a terrible guess). Here's how that money would trickle down:

–> Alexandra is the sole beneficiary of this distribution.

When it's all said and done on a $30 million deal:

Long story short, Tom's widow earns the lion's share of all royalties and profits generated by Jack Ryan and any of Tom's early novels. She makes even more money because she owns 80% of everything Tom created post 1998! And she presumably has a chunk of her father's money. Side note, in January of 2018, Alexandra bought an $8.5 million Beverly Hills mansion in CASH. Outside of managing her personal wealth, she runs a handbag company that is apparently somewhat successful and well-known.

So there you have it! Go watch Jack Ryan on Amazon!