Todd Chrisley Might Know Bankruptcy Best. How The Reality Star Wracked Up $50 Million In Debt

By Paula Wilson on October 9, 2014 in Articles › Entertainment

When we think of television personalities, we often associate them with fame, wealth, and the good life.  However, that's not always the case.  Actors who play small roles in multiple television shows often make less per year than the average secretary.  Celebrities who become reality television stars often sign on to the project because they need a steady source of income, even if it's far less than they might make if they are able to get a role in a more high-profile project.  If they're desperate, that income can be a great deal lower than you might expect.  For reality stars who get plucked from relative obscurity, such as Todd Chrisley, a reality television contract can serve as a lifeline of sorts.  In Todd Chrisley's case, he was attempting to outrun a very large amount of debt.  Unfortunately, he didn't run fast enough, and there may be some major changes afoot for his reality series, "Chrisley Knows Best".  How did someone, who was supposed to know best, end up on national television with the bank breathing down his neck?  Read on for all the juicy details… 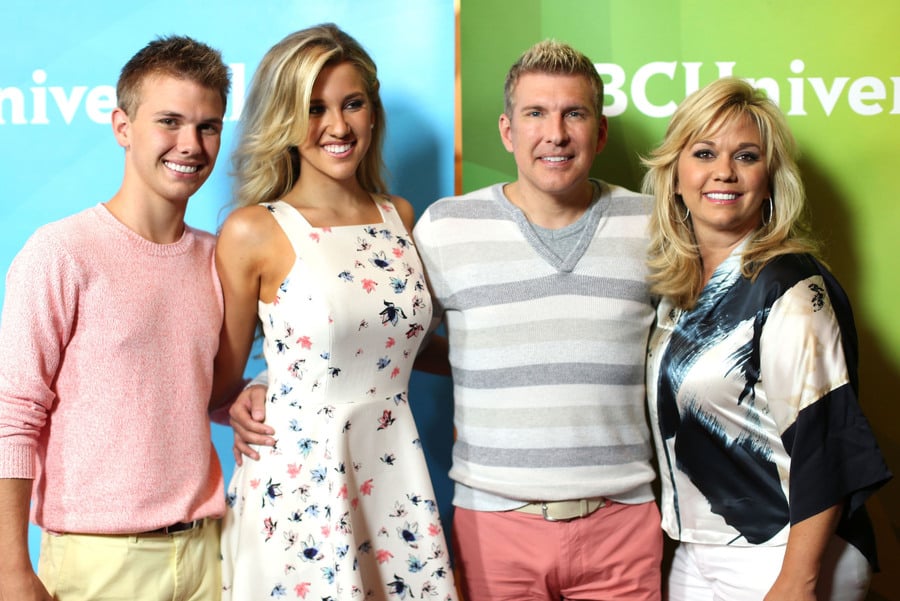 Todd Chrisley was born in Georgia, and grew up in Westminster, South Carolina. He is the quintessential genteel Southern gentleman with an edge of steel.  He has a decidedly acerbic wit that he often directs at his family members.  He married his high school sweetheart, a woman named Teresa, when she was 17 and he was 19.  They had their first child, a daughter, almost immediately, and a year later, welcomed a son.  Their marriage was reportedly very rocky.  Todd was focused on getting his real estate development business of the ground.  He would find houses that were in ill-repair, refurbish them, and sell them.  He and his family would live in the homes while they were being renovated and then move on to the next property.  According to his wife, he was terribly exacting and could not tolerate any imperfections in how things were arranged or how the family was dressed.  His need to control put a huge strain on the marriage, and they eventually separated amidst allegations of domestic violence.  Though they were issued joint custody, he fought tooth and nail for a number of years to gain primary custody, and then moved out of state with the kids.  As his income was larger, the courts ultimately ruled in his favor.

In 1996, two years after his divorce from Teresa had been finalized, he married his current wife, Julie. The couple went on to have three more children together.  Over the next few years, the real estate development business Todd launched in the late 80s, grew exponentially.  Called Executive Asset Management, LLC, the company was dedicated to refurbishing foreclosure properties and then selling them for a large commission.  By the mid-2000s, Todd Chrisley's company was worth $8 million.  He subsequently sold the business and then opened a new company, Chrisley Assessment Management in 2008.  Everything appeared to be going along swimmingly.  He and his wife, who is independently wealthy, purchased a number of properties in multiple cities.  There is the 30,000 square foot home in Rosewell, Georgia that serves as the setting for their reality show on USA.  It has nine bathrooms, a private theater, and an elevator, among other perks.  There is the 3,000 square foot, four-bedroom home that his mother and oldest son share in Alpharetta, Georgia.  Finally, there is a 4,324 square foot, four-bedroom, four-bath, vacation home in Seneca, South Carolina.  The properties have a total worth of about $4.3 million.

In addition to their property expenditures, Todd Chrisley began withdrawing an income from the business at a rate of $500,000 per month.  As long as the business was doing well, he was able to keep his family living a very lavish lifestyle, complete with Mercedes for birthday presents, and every toy imaginable.  He has publicly bragged about spending $300,000 a year on clothes alone.  However, his need to keep everyone and everything as perfect as possible, began to take a major toll on his pocketbook.  For the last few years, he's been sued and fined multiple times due to his out-of-control spending habits.  Then the house of cards fell down in a big way.  He was guaranteed a massive real estate development loan by Fannie Mae… and it fell through.  Suddenly, he was in the hole for $30 million.  He already had $12 million in mortgage debt and owed the IRS nearly $600,000 in back taxes.  To keep the family afloat, he'd actually borrowed $4.4 million from his wife.  With the loss of the Fannie Mae loan, he was now $49.4 million in debt, with assets worth only about $4.3 million.  In August of 2012, he filed for Chapter 7 bankruptcy protection.

When USA came calling with an idea for a reality show, it seemed like the perfect solution.  Notoriously flamboyant, sharp-tongued, and (by all appearances), wealthy, Todd Chrisley seemed like a tailor-made reality television personality.  The show was a hit for USA, and made the Chrisley family overnight sensations, with Todd taking the lead in popularity.  The show has already been renewed for a second season.  However, the money from the series, and associated speaking engagements and endorsements, only put a band-aid on a gaping wound.  A new court order has now made it possible for the bank to foreclose on the Chrisley's massive mansion.  The very mansion where the series is shot.  There are rumors that someone has already purchased the home, which would bail Todd Chrisley out somewhat, but the sale may only be rumors.  Nor does the sale solve the problem of where the show will take place next season.  Adding to the mess is the fact that with the amount of money he owes, he will most likely lose his other properties, as well.  Interestingly, the only property that is not tied up in the entire financial quagmire, is a two-bedroom, two-bath condo measuring 1750 square feet in Atlanta, Georgia.  If the family is forced to move there, it will be a severe comedown for the brood.  Will the show continue?  Or will the foreclosure really cause Todd Chrisley to lose everything?  For someone who supposedly "Knows Best", he certainly doesn't seem to know a whole lot about how to handle his wallet.