Domino's Pizza Was Founded By Two Brothers Who Grew Up In An Orphanage, One Made A Fortune, The Other Made A Really Bad Trade…

Domino's pizza is the world-leader in pizza delivery. Whether you love their pizza or hate it… or maybe you only order it when you're drunk, you can't escape the ubiquitous red, white and blue Domino's logo. There seems to be a Domino's franchise every few blocks in every American city and even abroad. That's actually not that far off. Domino's Pizza employs more than 290,000 people in 73 countries (when you include franchises). You can get a pepperoni pizza in "30 minutes or less" in 5,700 cities around the world. If you ever find yourself in Kosovo, you can chow down on some 'za at one of FIVE locations. Today there are approximately 17,000 Domino's locations, with the bulk of them located in the U.S., U.K., and India. As of this writing, Domino's has a market cap of $14.5 billion with annual revenue nearing $4 billion.

Tom and James did not have an easy start in life. Their father died when they were both very young. They bounced around foster homes and orphanages when their mother could no longer support them on her own.

So where are the Monaghan brothers today? Are they sitting on private islands with yachts and mansions around the world? Not exactly. One brother could certainly afford these luxuries. The other brother ended up making a VERY BAD decision… 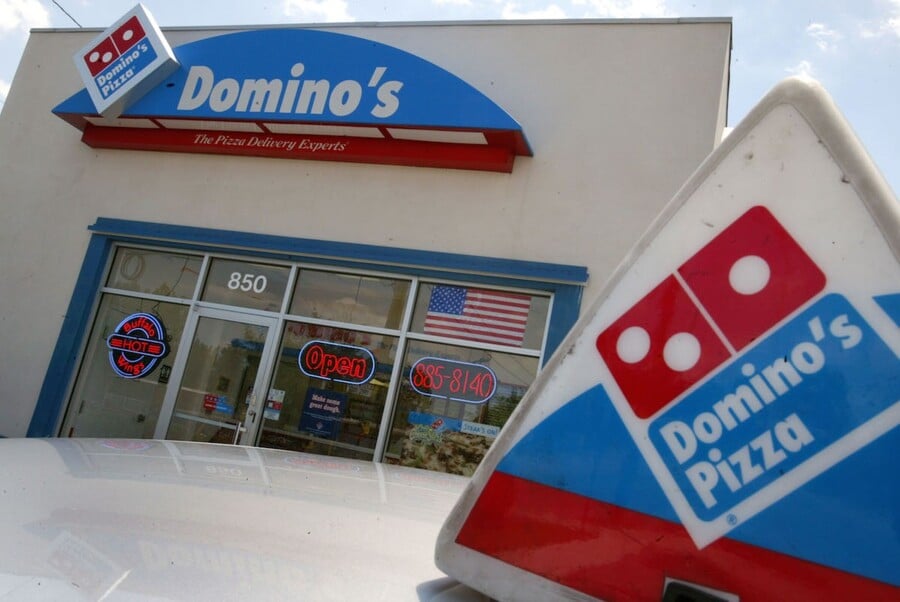 An Empire Is Born

Tom Monaghan famously wanted to join the Army but accidentally enlisted in the Marine Corps. He served from 1956 to 1959, receiving an honorable discharge. After leaving the Marine Corps, Tom moved to Ann Arbor, Michigan where he enrolled in the University of Michigan with the intention of studying architecture.

While Tom was a student, he and James bought a small pizza store called DomiNick's in Ypsilanti, Michigan near the campus of Eastern Michigan University. They picked up the joint for a total of $1,400. They put $500 cash down and took out a bank loan for the remaining $900.

The brothers initially planned to split the work at the pizza shop evenly, but James quickly found that didn't suit him. You see, he had a full time job as a postman with a stable salary, benefits and a pension. He couldn't reasonably give that up for a small pizza restaurant. More on this decision in a bit…

In 1965 Tom Monaghan purchased two more pizzerias in the same county. Around this time, DomiNick's original owner asked Tom to stop using his name on the new stores. From this point on, DomiNick's became Domino's. This same year the company was re-named Domino's Pizza, Inc. Domino's would remain 100% privately-owned by Tom for the next 33 years.

The real innovation of Domino's was its focus on delivery. While it may seem obvious and ubiquitous today, delivering pizzas was kind of rare in the mid-1960s. Tom developed an innovative pizza delivery box that allowed for more pizzas to be delivered at once. He proceeded to methodically expand to more college towns.

At the company's 10-year anniversary, there were 200 Domino's Pizza locations. In 1983 the company expanded outside of the United States, with the opening of a location in Winnipeg, Canada.

In 1985 the company touched down in Japan, with a location in Tokyo.

In the early 1990s, the company moved into Haiti, the Dominican Republic and all over India.

In 2012 the company shortened its name to simply, "Domino's".

In 2014, not only did the company expand to the birth country of pizza, with a location in Milan, Italy, it also crossed 6,000 global pizza shops. By this point, there were 1,000 locations in India alone!

Throughout most of this expansion, Tom Monaghan operated Domino's on his own, as a privately held business.

In 1998, Tom sold 93% of Domino's Pizza to private equity firm Bain Capital (which was co-founded by Mitt Romney) for $1 billion dollars.

In 2004 Domino's went public on the New York Stock Exchange under the ticker symbol "DPZ". Here's how DPZ has performed from 2004 to today: 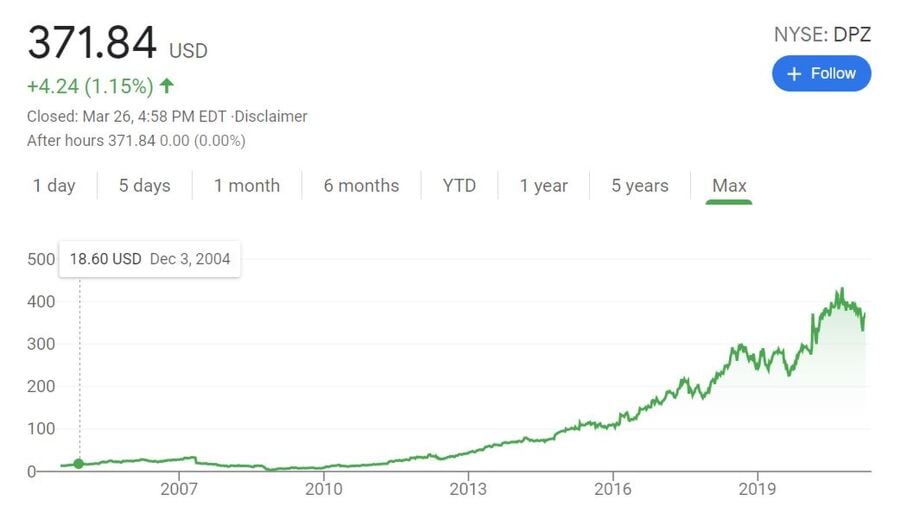 What Happened To James Monaghan?

If you'll recall from earlier in our story, when the brothers bought DomiNick's, James had a secure job as a postman with a pension and benefits.

Considering that 99% of all restaurant ventures fail, it's easy to understand James' hesitance to give up the sold security of a postal job, to dive dive head-first into the world of pizza entrepreneurship.

So as they were approaching their first year of owning DomiNicks, James went to Tom with a proposal.

James offered to sell his 50% stake in DomiNick's to Tom.

In return he requested to be compensated with the company's biggest non-pizza asset: A used car. Specifically, a used 1959 VW Bug that the company had been using to deliver pizzas.

What Happened To Tom Monaghan?

Tom lived a fairly lavish life for many years.

He owned the Detroit Tigers from 1983 to 1992. He bought the team for $53 million. That's the same as around $140 million in today's dollars. He sold the team for $85 million in 1992, ironically to another pizza tycoon – Little Caesars Pizza founder Mike Ilitch.

Tom built a private resort on an island in Michigan that featured several buildings designed in a style that paid homage to architect Frank Lloyd Wright. Tom was such a fan of Wright's work that he once paid $1.6 million for a set of chairs and a dining table that had been used at some point by the famed architect. He soon became the biggest collector of Frank Lloyd Wright collections and accessories in the world.

He bought cars. A lot of cars. He paid $1 million for a Model J Duesenberg. In 1986 he paid $8.1 million for a Bugatti Royale – one of only six in the world. He sold the car a few years later for a slight loss. He would go on to build up a collection of nearly 300 rare and valuable automobiles.

He bought a Gulfstream private jet, a Sirkorsky S-76 helicopter and a yacht.

And then Tom changed his life. 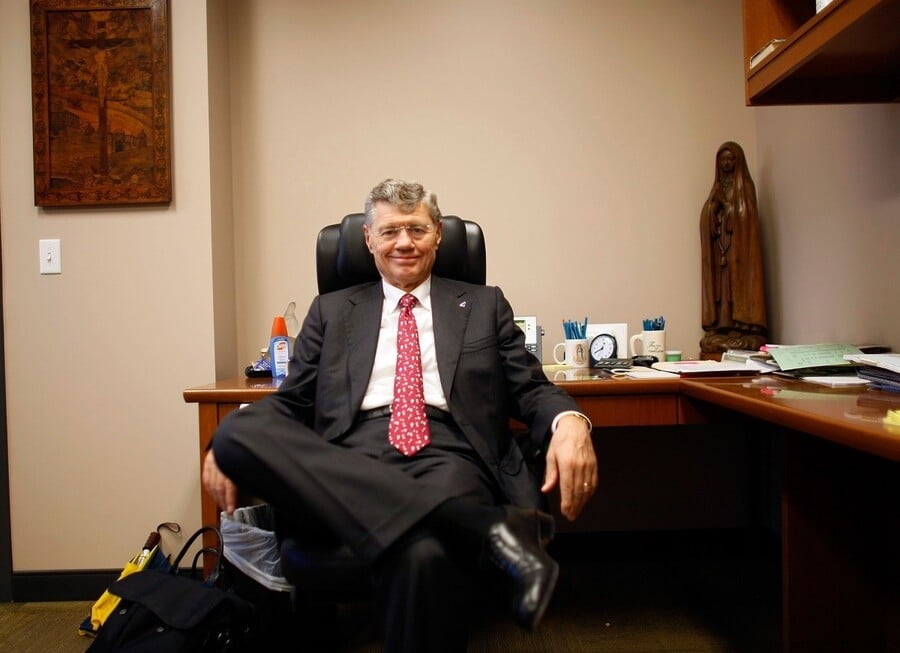 Tom actually decided to put the company up for sale and radically change his life after reading a book called "Mere Christianity" by C.S. Lewis. The section of the book that caused Tom to upend how he had been living, was the chapter on pride. This chapter inspired Tom to give up many of the trappings of his formerly lavish life. He soon became one of America's biggest philanthropists.

At his absolute peak, Tom's net worth was around $1 billion. He has committed to giving his entire fortune away.

A devout Catholic, he has used his wealth to found several Catholic colleges. In 1998 he founded Ave Maria College in Ypsilanti, Michigan and Ave Maria University near Naples, Florida.

In 2001 he founded Ave Maria Mutual Funds, an investment firm that focuses on Catholic-friendly and socially responsible investments.

To date he has donated more than $500 million to various charities.

Tom and his wife Marjorie met in the early days of Domino's. They met when he delivered her a pizza. They married and had four kids, all daughters.