The Time Ricky Henderson Framed A $1 Million Check… Instead Of Cashing It.

By Brian Warner on November 26, 2016 in Articles › Entertainment

Even though I rooted for the Giants and HATED the Oakland A's as a kid, every sports fan of the late 80s/early 90s had to respect Rickey Henderson. Rickey played for the A's from 1979-1984 then again from 1989-1993 with a four season stint in between with the New York Yankees. He played for a few other teams during his impressive career, but it was during those years in Oakland and New York when Rickey established himself as arguably the greatest leadoff hitter of all time. He currently holds the major league record for stolen bases, runs scored, leadoff home runs, unintentional walks and most stolen bases in a single season. He  was a monster when it came to stealing bases with a record 1406 during his career and a single season record of 130 set in 1982. Bottom line, even if you hated the A's, Rickey Henderson was always fun to watch. He was also one of the most entertaining characters in pro sports, both on and off the field. His career was filled with dozens of hilarious, too-good-to-be-true stories, verbal flubs and hi-jinx, many of which were delivered by Rickey… in the first person. Out of all these legends, my favorite Rickey Henderson true-story involves a $1 million signing bonus, and a very awkward call from the Oakland A's accounting office.

Before we get to the signing bonus story, here are just a few other examples of Rickey Henderson being Rickey Henderson: 1) Rickey once asked a teammate how long it would take to drive to the Dominican Republic, which he thought was a clothing store. 2) He once got frost bite after falling asleep with an ice pack strapped to his ankle and had to miss three games. 3) One time while he was on the Yankees, Rickey bragged about how awesome his new condo was because apparently it had a view of the "Entire State Building". 4) For his entire career, before every single game Rickey would stand stark-naked in front of his locker and chant "Rickey is the best" over and over for several minutes.

So what's the deal with this $1 million check? Rickey made his major league debut on June 24, 1979. In that debut he got two hits in four at-bats and even stolen a base. In 1980, he stole 100 bases in a single season, something only three other players have ever done to this day. In 1981, he was the odds-on favorite player to win the league MVP but unfortunately the season was cut short due to a strike. Prior the 1982 season, Rickey was earning the league minimum $185,000, (equal to roughly $456,000 today). Thanks to his impressive performance up to that point, the A's showered Rickey with a huge contract. In the next season his salary would jump to $535,000 (roughly $1.3 million today), followed by $950,000 ($2.35 million today).

But perhaps the best part of all was the signing bonus. To reward his performance over those first few years, just before the start of the 1982 season the Oakland A's gave Rickey a $1 million signing bonus. That's equal to $2.5 million today.

As you can imagine, becoming a millionaire overnight was a dream come true for a kid who grew up in a tough neighborhood not far from the Oakland stadium. 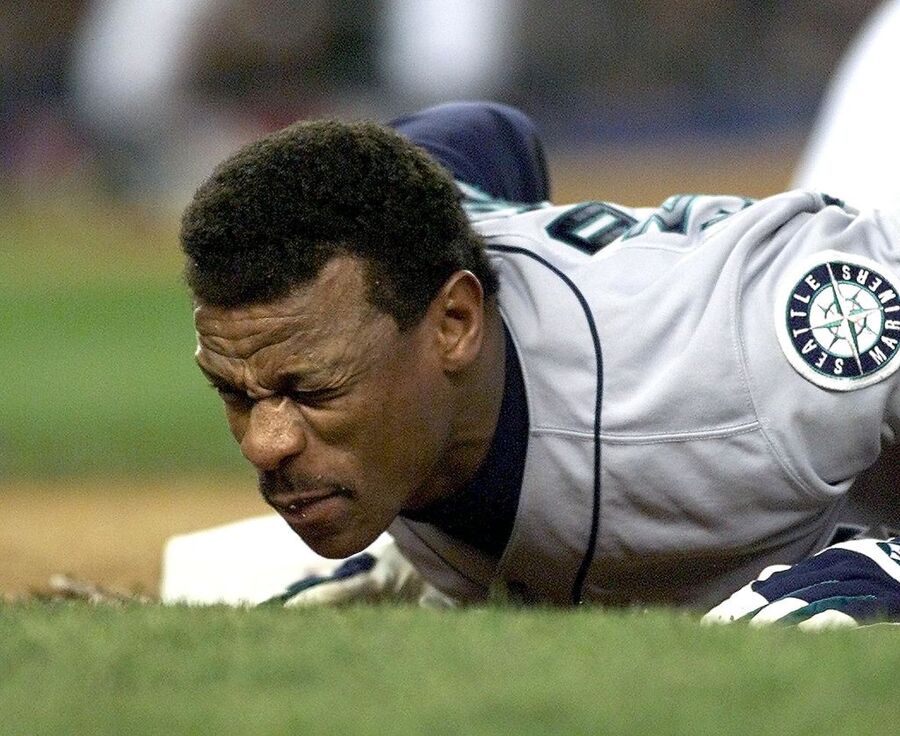 A few months after the ink was dry on the contract and the check, someone in the Oakland A's accounting office came across an unusual error in their books. For the life of him, some poor Oakland accountant could not figure out why the team's books were off by one million dollars. A few thousand bucks would be nothing to sneeze at, maybe even $10,000. But to be off by a full million dollars was absolutely insane. The discovery of this discrepancy set off a massive investigation until someone finally figured out that the $1 million was related to a single check. A check that had been written to Rickey Henderson more than four months earlier.

Someone from the accounting office called up Rickey and asked him if he still had the check. Rickey responded: "Ya I have it! I'm staring at right now. It's still in the frame." To which the accountant presumably responded: "What?"

As you've probably deduced by now, Rickey was so proud of his $1 million dollar check, that he decided to frame it and put it on his wall. Apparently he was unaware that you have to cash the check in order to actually become a millionaire! The accounting office politely asked Rickey to take the check to his bank, ask them for a photo-copy and then hang that on his wall instead.

Life lesson learned! And just in time too, because over the next 21 seasons Rickey would go on to earn more than $44 million. At some point along the way, Rickey hopefully signed up for direct deposit!

What About Cashing a $15 Million Check?

Sports players forgetting (or not knowing) to cash their checks is a surprisingly common occurrence. And it can be massive checks! For example, earlier this year it was revealed that Arizona Cardinal cornerback Patrick Peterson waited several months to cash a $15 million dollar bonus check, $15,361,000 to be precise. When Sports Illustrated finally tracked him down to ask him why he hadn't deposited the check, Peterson replied "I just haven't gotten around to it". Are you freaking kidding me!!!

When I changed banks recently I was able to electronically transfer all but 25 cents from my old account to the new account. So the old bank electronically printed a check for 25 cents and popped it in the mail (with a 49 cent stamp). Even though it was literally just a quarter, I deposited that baby within 24  hours! That's my money! I'm not letting someone else have it!