This Guy Makes $250,000 A Year To Impersonate Zach Galifianakis In Vegas

By Paula Wilson on March 12, 2015 in Articles › Entertainment

Zach Galifianakis enjoyed the sort of trajectory that most comedians only dream of. He went from performing stand-up in clubs and on tour, to performing his stand-up on television, to appearing in various television shows, to headlining his own television specials, to playing supporting and then co-starring roles in movies. He's most widely known for his work as Alan Garner in the three "Hangover" films. Along the way, he's won a number of awards for writing and performance, and has become a household name (even if people still have trouble pronouncing it). Like many celebrities, he is often asked to appear at a wide range of events, ceremonies, and parties. He can't be everywhere, of course, but that hasn't stopped one person from cashing in on his fame. Meet Thaddeus Kalinoski, the man making $250,000 a year for never, ever breaking character. Kalinoski is Galifianakis' eerily similar celebrity look-alike, and he's spent the last four years making mad coin being everywhere for anyone who wants a little bit of "Hangover"-inspired love.

Zach Galifianakis was born in Wilkesboro, North Carolina and went on to attend North Carolina State University. He left before graduating to launch his stand-up career. He broke into television with a role on the series, "Boston Common," and then began writing for "Saturday Night Live." "SNL" wasn't a good fit, and he lasted less than a month, but small television and film roles soon followed, including appearances in "Corky Romano," "Bubble Boy," and "Into the Wild." He went on to host a number of specials and comedy-centric talk shows, including "Comedy Central Presents" and "Late World with Zach." He also co-headlined the "Comedians of Comedy" tour. In 2009, he became a household name with his performance as Alan Garner in "The Hangover," and went on to reprise the role in the film's two sequels. His "Funny or Die" series, "Between Two Ferns with Zach Galifianakis," also became hugely popular, and won him a Primetime Emmy Award. Most recently, he appeared in the Oscar-nominated film, "Birdman," and he is currently developing a series on FX with fellow comedian, Louis C.K. He is a busy, busy man. His character in "The Hangover" is nothing like the hard-working comedian in real life, but it's definitely his most popular creation. 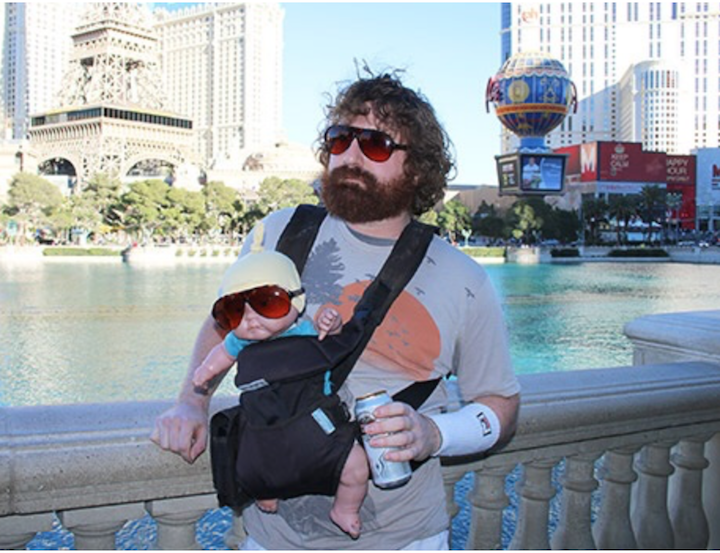 Enter Thaddeus Kalinoski, a man more than willing to mimic Zach Galifianakis' most famous character for the right price. Galifianakis' character is so popular, that people are more interested in having the character, Alan Garner, at their parties and events, than the actor who played the role! Thaddeus Kalinoski stumbled into his gig as the faux-Alan Garner/Zach Galifianakis. After a painful divorce, he put on 20 pounds, and didn't cut his hair or beard. The resemblance between he and Galifianakis became more and more apparent as he packed on the weight. He took his new look and act to Atlantic City, where it was fun, but not particularly lucrative. When he traveled to Las Vegas, however, a city rife with impersonators, his whole life changed. It began when a random stranger handed him $100 and suggested he buy himself a drink. He then spent the entire weekend partying, as people invited him to join their gatherings, hop into their limos, or jump in the pool. He extended his stay, and four years later his career is still going strong. He's become a major fixture in Las Vegas, and one of its most popular impersonators. He's even invested in an animatronic baby and a monkey in order to make his impersonation as authentic as possible. He's memorized lines from all three "Hangover" films, as well as Galifianakis' speech patterns, and he's has been booked for everything from bachelor/bachelorette parties, to corporate events, to private celebrity soirees. The entire experience came full circle one day, when a casting agent approached him while he was walking around town and asked if he would work as Zach Galifianakis body double on "The Hangover III." The resemblance between the two men was so uncanny that even the cast and the crew of "The Hangover" had trouble telling them apart.

Interestingly, he never asks for money. Even so, people hand him wads of cash to party with them, invite him to spend entire weekends hanging out, and tip him to appear in photos. Since he loves eating and drinking, maintaining the look of Alan Garner hasn't been difficult. He now makes upwards of $250,000 per year. Without even asking for payment, he regularly makes $1,000 a night simply because he looks like someone else. Zach Galifianakis recently lost a great deal of weight, so Kalinoski no longer looks like the actual actor. However, since people seem much more fascinated with the character than Galifianakis himself, work has yet to slow down for Thaddeus Kalinoski. Odds are, as long as the "Hangover" trilogy remains popular, Thaddeus can keep partying hearty, while making a strange living playing an actor, playing a character.