By Amy Lamare on December 10, 2020 in Articles › Entertainment

At some point this morning Airbnb will finally be a public company. After a rocky year, their timing could not be more perfect. Airbnb was in the late stages of preparing for its IPO at the beginning of 2020. Then, as we all know, COVID-19 happened.

In an instant, COVID-19 obliterated Airbnb's entire business model. Reservations dropped 80%. The company was forced to basically shut its services down while it evaluated options. The company cut 54% of marketing costs, ultimately 22% of all costs. They also raised $3.5 billion in emergency funding to weather the storm. Amazingly, Airbnb pivoted to a degree that can almost not be fathomed. Today the company has emerged from the pandemic as the preferred lodging option over hotels.

Helping their IPO prospects is DoorDash. DoorDash went public yesterday and absolutely sky rocketed. DoorDash was expected to IPO at a $20-30 billion valuation, it's currently sitting at a $56 billion valuation and came pretty close to $70 billion at yesterday's peak. Last night Airbnb shares were priced at $68. As of this writing (the IPO hasn't happened yet), the market is expecting Airbnb shares to be priced at around $150 by the time the average investor can make a purchase. At $68 a share, the company would be worth $47 billion. At $150, the company would be worth just a touch less than $100 billion. At that level, Airbnb will instantly be worth more than Marriott and Hilton COMBINED.

Over the years Airbnb raised just under $6 billion in private investments. 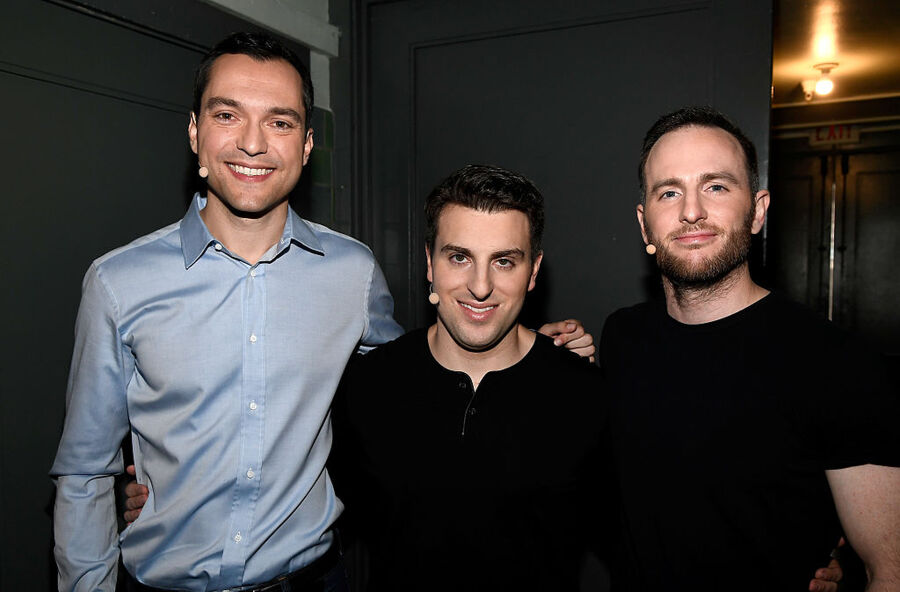 Sequoia Capital led the seed round for Airbnb in 2009. The company invested $585,000 into the then-brand-new startup. Sequoia has participated in every funding round since and is Airbnb's largest shareholder.

Back in 2009, Alfred Lin, a partner at Sequoia Capital and former COO of Zappos, was skeptical about Airbnb. He thought the idea that people would open their homes to strangers was crazy. It was founder Brian Chesky that won him over. Chesky was able to lay out the trajectory of the business rather than just focusing on the overall vision. Chesky also understood how hard it would be to make Airbnb a widely accepted thing, which Lin appreciated.

Brian Chesky is not just one of Airbnb's three founders, he was the then-fledgling company's first host. The idea was born in 2007 when best friends Brian Chesky and Joe Gebbia realized that pretty much all of the hotels in San Francisco were sold out during the huge Industrial Designers Society of America conference. They came up with the idea of turning their apartment into a bed and breakfast for people attending the conference. They didn't have extra beds or bedrooms, but they did have three air mattresses. They inflated them and called themselves Airbed and Breakfast. Three people stayed with Chesky and Gebbia and they charged them $80 a night.

Chesky is the CEO of Airbnb and over the last 12 years, he has ushered the company through crazy growth, lawsuits, two recessions, a pandemic, and now, its IPO.

Back in the early days of Airbnb, Joe Gebbia went door-to-door to hosts to take photos of their homes for Airbnb's website and app. Today he is Airbnb's Chief Product Officer and heads up the company's in-house design studio. He also develops new products and services for the country.

The IPO will vastly increase his wealth. However, Gebbia and his other two co-founders are all members of the Giving Pledge and have committed to donating at least half their wealth to philanthropic causes in their lifetimes.

Nathan Blecharczyk came on board at Airbnb when it was just Chesky and Gebbia at the company.

Founders Fund invested in Airbnb in 2013. They led the Series C round in 2013 and bought in at $5.90 per share. The company was particularly impressed with Brian Chesky and the sixth sense he seemed to have about what Airbnb's customers wanted from the homes they rented.

DST Global is Israeli-Russian billionaire Yuri Milner's firm. He is a former banker. He founded DST Global in 2009. DST invested in Airbnb's Series B round in 2011. That was the round that officially gave Airbnb its unicorn status.

We've grouped these two private equity firms together because they invested at the same time – in April when Airbnb was losing money daily as a result of the global lockdowns due to the coronavirus. This investment was a lifeline for not just Airbnb, but the travel industry in general.

Belinda Johnson joined Airbnb in 2011 as its chief legal counsel. She was promoted to COO in early 2018. In 2019 she resigned from that role. Her last day was in March 2020, but she was made a board member at that time. She was at Yahoo before Airbnb. She is also on the board of directors of PayPal. She sold 466,824 shares of her Airbnb stock in May for $27.4 million. She forfeited some of her unvested stock and option when she quit. That said, she got new stock when she was made a board member. When all is said and done, including the May sale for $27.4 million, Johnson will make more than $115 million from her Airbnb shares.

Jonathan Poulin sold his startup that specialized in luxury vacations to Airbnb in 2017 for $300 million. He joined the company to set up a luxury division.

Kenneth Chenault was Airbnb's first outside board member. He is the former CEO of American Express. He's been with Airbnb since 2018. He is also the chairman and managing director of the venture capital firm General Catalyst.

Airbnb bought one of Accel's companies, Hotel Tonight, in 2019 for $400 million. Accel had a sizeable stake in Hotel Tonight after leading its 2011 seed round. Accel converted its shares of Hotel Tonight into a stake in Airbnb.

Greg Greeley came to Airbnb in 2018 to run its home rental division. Previously, he was the head of Amazon Prime. Greeley left Airbnb during its executive shakeup early in 2020. He is an advisor at early-stage venture capital firm Tapas Capital.

Aristotle "Ari" Balogh joined Airbnb in 2018 from Google. He was the VP of engineering on the infrastructure behind Search at Google. Prior to that, he has led an 8,000 member product and engineering team at Yahoo.

Hiring a CFO is important for a startup planning its initial public offering. Dave Stephenson joined Airbnb in 2018. He had previously worked at Amazon for 17 years.

Catherine Powell joined Airbnb this year from Disney. She ran the theme parks division for the U.S. and France. At Airbnb, she is the head of the global team that combines the rental and Airbnb Experiences groups.

Former Apple executive Angela Ahrendts joined Airbnb's board of directors in 2019. At Apple, she was senior VP of retail. She was also the tech giant's highest-paid executive.