It's always impressive when success runs in a family. Susan and Anne Wojcicki are prime examples of that. These sisters are Silicon Valley superstars. Susan is the CEO of YouTube. Anne is the CEO of 23andMe. Susan has a net worth of $500 million. Her younger sister Anne has a net worth of $440 million. These sisters are keeping their Silicon Valley success all in the family. These two women rose through the typically bro-tastic climate of the startup world to be enormous successes themselves.

Susan Wojcicki was born in 1968 and Anne in 1978 in Los Altos, California. Their mother is a teacher and father a physics professor at Stanford. The sisters grew up on Stanford's campus. Susan went to Harvard for her bachelor's degree, the University of California Santa Cruz for her M.S. in economics and UCLA for her MBA.  Anne went to Yale. When Susan graduated, she thought about going into academia (like the third Wojcicki sister) but the allure of the tech industry changed her mind. In September 1998, the same month that Google was incorporated, its founders Larry Page and Sergey Brin set up Google's first office in Susan's Menlo Park garage.

At Google, Susan worked on the first Google Doodles and the initial viral marketing programs. She also was integral in the development of Google Images and Google Books. She grew within Google, eventually becoming the senior vice president of Advertising and Commerce. In that role she led the development of the advertising and analytics products including AdWords, AdSense, and Google Analytics. YouTube, then a tiny startup, was competing with Google Video, one of Wojcicki's projects. So, what did she do? She recommended that Google buy YouTube. She oversaw two of Google's largest acquisitions-the $1.65 billion purchase of YouTube in 2006 and the $3.1 billion purchase of ad network DoubleClick in 2007. 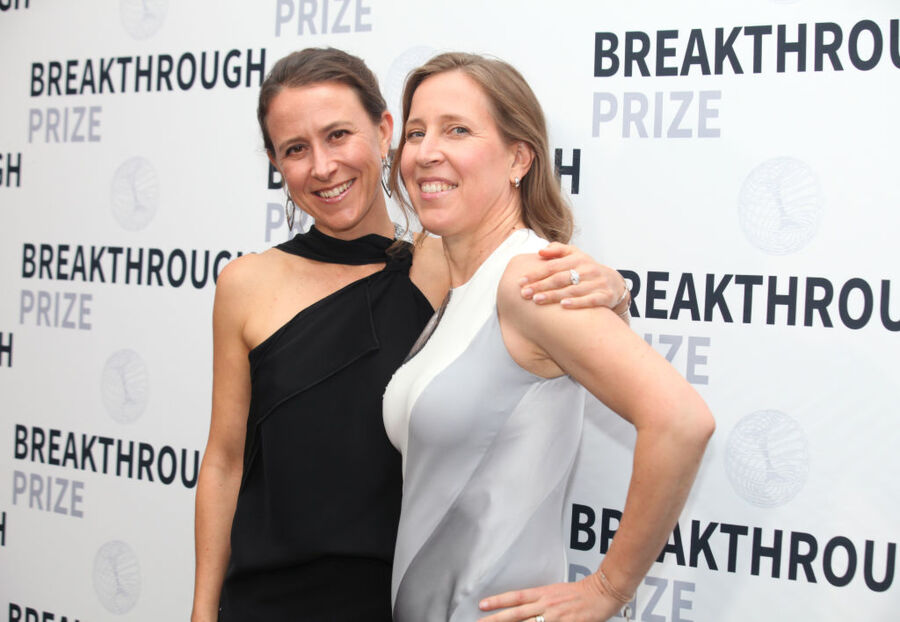 Susan was named CEO of YouTube in February 2014. Since she became CEO, YouTube has reached more than 1.5 billion logged-in users each month. Those users are watching one billion hours of content each day. Also, since Wojcicki took over as CEO, the percentage of female employees has risen from 24% to 30%. Susan has been called the most important person in advertising. Time named her the most powerful women on the Internet as well as one of their 100 most influential people of 2015.

Susan is married and the mother of five children. In December 2014 as she was preparing to take her fifth maternity leave, she wrote an op-ed for the Wall Street Journal on the importance of paid maternity leave.

Anne Wojcicki is the youngest of three sisters. She attended Yale, where she was a competitive figure skater and played on the women's ice hockey team. She graduated with her B.S. in biology in 1996. After graduating, she worked as a health care consultant at San Francisco based investment funds. She was also a health care investment analyst for four years focusing on biotechnology companies. She quit in 2000 after becoming disillusioned by the culture of Wall Street. She intended to take the MCAT and go to medical school. However, she focused on research instead.

Anne co-founded 23andMe with Linda Avey in 2006. 23andMe is a genomics and biotechnology company that provides genetic testing. It is named for the 23 pairs of chromosomes in a normal human cell. 23andMe's personal genetic test kit was named the 2008 Invention of the Year by Time. In 2017, Anne's company won approval for 10 genetic risk tests including ones for Alzheimer's, Parkinson's, and Celiac disease. 23andMe became the first direct to consumer genetics company to get FDA approval for cancer risk tests.

Anne married Google co-founder Sergey Brin in 2007. They have two children. They separated in 2013 and divorced in 2015. She dated former MLB star Alex Rodriguez for just under a year.

For what it's worth, the middle Wojcicki sister is no slouch either. Janet Wojcicki is a PhD, an anthropologist and epidemiologist at the University of California, San Francisco.

Clearly it pays to have educators for parents and also to grow up on the campus of Stanford University.