By Amy Lamare on August 15, 2020 in Articles › Entertainment

Wayne Newton IS Las Vegas. It's true. He's a staple there. He's been called Mr. Las Vegas, Mr. Entertainment, and the Midnight Idol. He's probably best known these days for "Danke Schoen," his signature song," which was used in the 1986 movie "Ferris Bueller's Day Off." If you're a little older you may remember his hits from the 1960s-1980s including "Red Roses for a Blue Lady," "Daddy, Don't You Walk So Fast," and "Years." Newton is a legend in Las Vegas, and arguably, the world. Newton is 78-years-old today and still going strong. He was born in Norfolk, Virginia on April 3, 1942. He learned how to play the guitar, piano, and steel guitar when he was six. He grew up in Newark, Ohio, and starting singing with his brother Jerry. Newton had severe asthma, so the family moved to the drier climate of Phoenix, Arizona in 1952. As the Rascals in Rhythm, he and his brother appeared at the roadshows of the Grand Ole Opry, on an ABC program called "Ozark Jubilee," and performed for President Dwight D. Eisenhower.

In 1958, during the second semester of his junior year of high school, a booking agent from Las Vegas saw Newton and his brother perform and invited them to audition for him. Wayne and Jerry ended up performing six shows a day for five years. In September 1962, they made the first of their 12 appearances over two years on the popular "Jackie Gleason Show." In the early 1960s, Wayne dived into acting, appearing as Andy on "Bonanza." 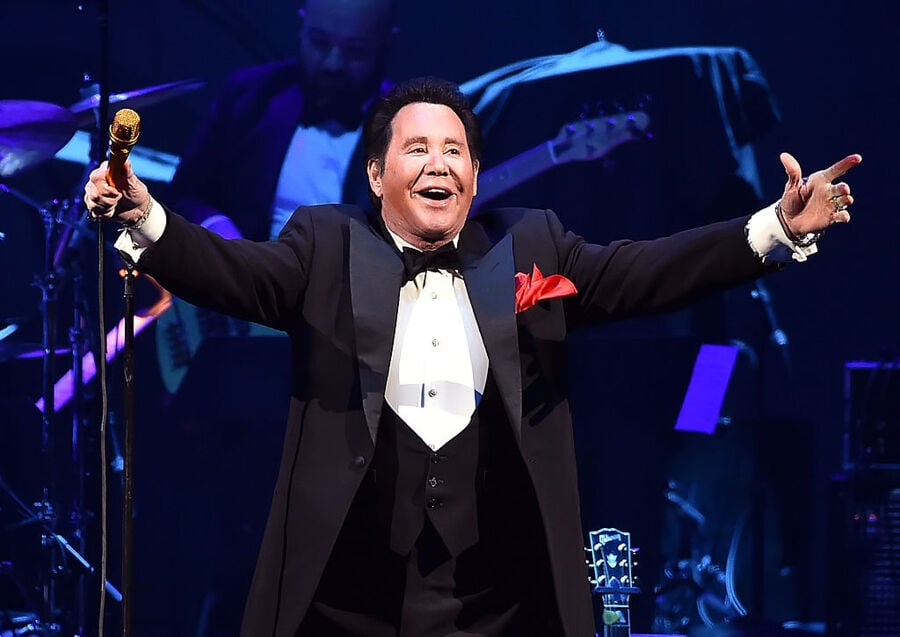 In 1963, Wayne signed a deal with Capitol Records. He released his first album, containing the song "Danke Schoen," which hit number 13 on the song charts. Newton was well-liked by the Las Vegas headliners of the day including Lucille Ball, George Burns, and Jack Benny. They often hired him as an opening act for their popular shows. When Jack Benny's contract at the Flamingo Hotel expired, Newton asked for his own headlining act. He was given it. Newton basically grew up on Las Vegas stages, transitioning from his teen singer higher-pitched voice to a deeper, more masculine voice. In 1994, Newton performed his 25,000th solo show in Las Vegas. In 1999, he signed a 10 year deal with the Stardust, in which he performed in a showroom named for him for six shows a week, 40 weeks a year. This was the first "headliner in residence" style deal in Las Vegas. Those types of deals have become enormously popular since with everyone from Celine Dion to Prince to Britney Spears to Jennifer Lopez to Lady Gaga to David Lee Roth performing in these style of shows. Newton's last show at the Stardust was on April 20, 2005, prior to the demolition of the iconic casino. He played a 30-show run that summer at the Las Vegas Hilton and amicably canceled his contract to spend more time with his second wife and their young daughter.

Newton put on his Mr. Las Vegas show at Caesars Palace commemorating his 60th year of performing in Las Vegas from late January through May 2019. At the time he told the press, "I was here when Caesars was built. This hotel for me has always represented the flagship of the Strip."

In the summer of 2020, Newton became the spokesperson for Caesars Entertainment in a series of television spots promoting the reopening of the hotels and casinos during the coronavirus pandemic.

Newton has loved horses since he was a child. He got his first horse when he was in sixth grade. In fact, he calls horses and music the two great loves of his life. Newton has been breeding Arabian horses since 1969 when he purchased the stallion Naborr. He's created six generations of over 700 foals as of 2014. Ninety-six of his horses are champions. His breeding program is called Aramus Arabians, which is named after his champion stallion Aramus. In 1996, he was awarded the Breeder of the Year award by the Arabian Professional and Amateur Horseman's Association. In 2007, Newton was awarded the Arabian Horse Breeders' Association Lifetime Achievement Award for his work with the breed. Even today, at 78, Newton is still very involved in the breeding program for his horses, the management of his horses, and deciding which horses to keep and which to sell.

From 1980 to 1982, Newton was one of the owners of the Aladdin Hotel. The partnership he was involved in ended in lawsuits and Newton's failed attempt in 1983 to buy the whole hotel for himself. Newton ended up having $20 million in debts related to him suing NBC for libel when the network claimed he had partnered with the Mafia to purchase the hotel and casino. He filed for bankruptcy in 1992. Included in that was $341,000 lien by the IRS. By 1999, Newton had rebounded and was wealthy again.

In the summer of 2005, the IRS filed another lien against Newton, claiming that he owed $1.8 million. His attorney alleged that the IRS actually owed Newton money.

In late 2009, the Oakland County International airport in Michigan accused Newton of owing more than $60,000 in unpaid parking fees for the $2 million Fokker F28 plane Newton had parked there and abandoned sometime in 2006. Basically, the plane was in Michigan, at that airport for repairs. Newton dropped it off in 2005 and it was completed in 2007. At that time the plane was moved to an outside plane parking lot, which cost $5,000 a month. By 2009, the interior of the airplane was moldy and rotting. The plane was disassembled, shipped, and reassembled at Casa de Shenandoah.

Also in 2009, Newton was sued for $32,384 for not paying an invoice for hay delivered to Casa de Shenandoah for his prized Arabian horses. GMAC also tried to sue Newton that same year for $36,999 owed on a Cadillac lease. That suit was eventually dropped.

In early 2009, Monty Ward, Newton's former personal pilot, was awarded $501,388 in a judgment for back wages relating to a lawsuit filed in 2006. Sheriff's Deputies attempted to serve civil papers and seize property as part of the judgment, but Newton's staff would not accept the papers.

In 1966, Newton began acquiring land at the corner of Sunset and Pecos in Las Vegas. Eventually, he amassed 40 acres with eight homes, a horse hospital, stables, bird enclosures, and man-made lakes on the land. By 2010, Newton sold 80% of it to a developer for $19.5 million. They were going to turn the property into a museum and theme park. Those plans fell through and the developer sued Newton, claiming he spent $50 million on upgrades and Newton refused to move out of the house. Newton was also accused of sexually harassing construction workers. In mid-December 2012, the sale of Casa de Shenandoah was approved by the Bankruptcy Court Judge. It went on the market for $70 million and eventually sold, in the summer of 2019, for just over $5 million.