What's worse? Being broke and never knowing what's like to be anything else OR having a huge fortune and losing it all? Imagine that you're used to the good life. You've got a penthouse on Park Avenue and you take vacations in the chicest spots around the globe. Then one day, the money is all gone and you're living in a modest home, driving a Honda, and vacationing in Florida. (Not that there is anything wrong with vacationing in Florida – it's just not St. Barts.

Believe it or not, this happens all the time!

A prime example is Patricia Kluge. When Patricia divorced her husband John Kluge, founder of Metromedia, after nine years of marriage, she received a $100 million divorce settlement. By 2011 she had lost it all and declared bankruptcy. She ended up making wine for Donald Trump to make ends meet. This is her story. 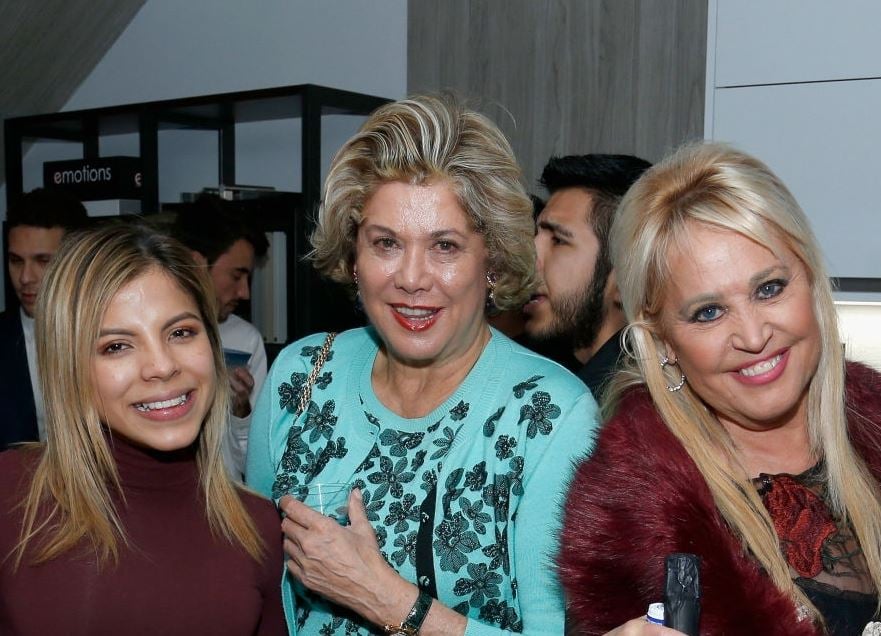 (Patricia in Center via Getty)

Patricia Kluge was born Patricia Maureen Rose in Baghdad in 1948. Her father was British and her mother was half Scottish and half Chaldean. One of her grandfathers worked for British Petroleum and the other was a high-ranking officer at the British embassy. Her family summered in Lebanon and she attended the Convent School.

John Kluge was born in Germany in 1914. He emigrated to the US as a child then earned a degree at Columbia University. In the mid-1950s Kluge began buying stock in the Metropolitan Broadcasting Company. Metropolitan's two major assets were WABD in New York City and WTTG in Washington D.C..

After becoming the majority owner in 1959, John undertook a major expansion into radio and additional TV stations. In the mid-1960s he bought an outdoor advertising firm. Upon this acquisition John decided to change the company name to MetroMedia.

In 1986, John sold MetroMedia's TV assets to News Corp for $4 billion. The sale made him the the second-richest person in the U.S. with a $2 billion fortune. That's the same as around $4.6 billion in today's dollars.

The Kluges were the toast of New York society. They adopted a son, John Jr. in 1984 and moved to Virginia where they spent four years building a 45-room mansion they called Albemarle House. They decorated it with antiques from across the globe. Five man-made lakes, English gardens, an 18-hole golf course, and an 850-acre game preserve were on their property. Their lifestyle was the very definition of opulent. Celebrities and royalty visited Albemarle House and the Kluges.

John and Patricia divorced in 1990. In their divorce she was given Albemarle – the land, the house, and the antiques – as part of a $100 million divorce settlement.

She decided to buy a vineyard adjacent to her property and set out to make world-class wines in Virginia. She bought the best equipment, hired winemakers from Europe, and before long she was producing 10 internationally acclaimed wines. By the mid-2000s, Kluge Estate Vineyard was valued at $75 million.

Patricia also started taking out big loans to grow the business including a $22.5 million mortgage on Albemarle House and $39 million from Farm Credit of Virginia. She then borrowed $12 million to create a subdivision of 23 luxury homes with their own small vineyards.

And then the 2008 global financial crisis hit.

Kluge was producing 30,000 cases of wine a year, but only selling a third of it. The Farm Credit loan went into default in November 2008. The vineyard was losing $500,000 a month. She put Albemarle House on the market for $100 million. She auctioned off her antiques and jewelry in March 2010 and raised $20 million, which she put back into trying to rescue her winery. The price of Albemarle House was slashed to $24 million.

Kluge leveraged literally everything she owned and lost it all. Farm Credit foreclosed on Kluge Estate Vineyard in September 2010. Albemarle House was seized in January 2011. Then her subdivision, Vineyard Estates was foreclosed on too. She was working with the banks and attorneys around the clock trying to save her business.

And then Donald Trump stepped in.

Trump offered $20 million to bail out Kluge Estate but the bank rejected the offer. So Trump began buying the property in foreclosure auctions and private purchases. Bank of America rejected Trump's winning bid of $3.6 million for Albemarle House, so he bought the 200-acres right in front of it, forcing the bank's hand.

In July 2011 she filed for Chapter 7 bankruptcy protection. Interestingly, in an interview with Town and Country magazine, Patricia said she lost nothing: