By Brian Warner on August 5, 2021 in Articles › Entertainment

Trey Parker and Matt Stone are truly two of the luckiest guys in the world. It also doesn't hurt that they are two of the funniest guys in the world. But in today's self-immolating culture where people get canceled for a Halloween costume they wore in middle school, the "South Park" guys have somehow managed to stay totally untouchable. For nearly 25 years they have shocked, offended and skewered all levels of society with total impunity. And today their perfect track record is being rewarded in a BIG way.

This morning Bloomberg revealed that Matt and Trey have signed a six-year, $900 million mega-deal with ViacomCBS. At $150 million per contract year, it's one of the biggest and richest talent deals in Hollywood history. To give some perspective on the size, it would be a pretty big deal if a producer landed a deal that paid $20 million a year.

With today's new deal, Matt and Trey (Matt is on the left, Trey is on the right in the photo below), will make six more seasons of regular "South Park" episodes. They will also make 14 "South Park" movies exclusively for ViacomCBS' streaming service Paramount+.

Perhaps most-importantly for Viacom/Paramount+, roughly halfway through the deal the network will finally become the exclusive streamer of the series it launched back in 1997. This has been a longtime goal of Viacom executives, one that has taken over a decade to arrange thanks to one accidentally brilliant contract term Matt and Trey requested during a 1997 negotiation with Comedy Central. More on this in a moment… 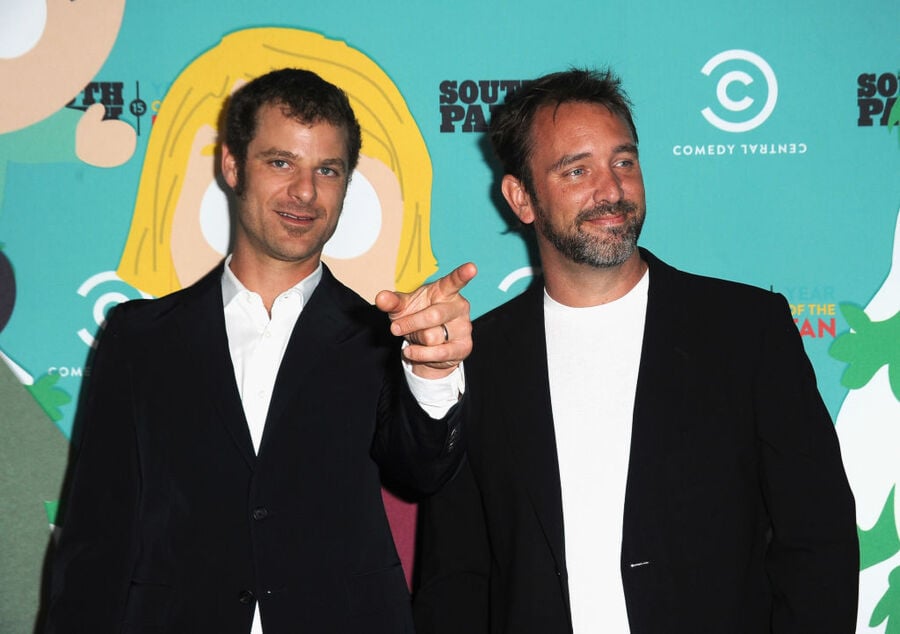 An Empire is Born

Just like a lot of today's billion dollar empires, South Park was born in a dorm room. Matt and Trey met in a film class in 1992 at the University of Colorado, Boulder. They quickly bonded over a shared sense of humor and love of "Monty Python."

At some point they decided to create an animated short which they called "The Spirit of Christmas." They used animated construction paper cutouts with stop-motion and featured early versions of what would become the world-famous "South Park" main characters.

At the urging of a friend who was an executive at Fox, Stone and Parker created a second version of their short in 1995 which the Fox exec wanted to use as his Christmas card. The Fox exec literally sent VHS tapes around to his friends by mail. The friends made copies and sent them to their friends. Practically overnight the video went viral – a decade before YouTube was born – among some of the most talented and powerful people in Hollywood. Pretty soon, Parker and Stone were developing a television show for relatively unknown TV network called Comedy Central, which at the time was known for the Craig Kilborn-hosted iteration of "The Daily Show."

Today "South Park" is the second-longest running show on Comedy Central behind "The Daily Show."

Let's travel back to 2007. Housing prices were booming. Lehman Brothers executives were confidently collecting stock options. Sarah Palin was running round talking about God knows what. YouTube had JUST been bought by Google and was in the midst of a $1 billion copyright lawsuit brought on by Viacom.

For those who may be too young to remember, back in 2006/2007 YouTube was made up of approximately 50% Comedy Central shows and 50% music videos, all of which had been illegally ripped and uploaded. One of the most-ripped shows was "South Park."

It was a busy year to be a Viacom lawyer because while this was all going on, Matt and Trey's deal with Comedy Central (a Viacom subsidiary) was up for renewal.

The two parties came to an agreement but at the last minute, Matt and Trey's lawyer reminded Viacom's lawyers of a special term in the duo's overall contract that was signed a decade earlier, in 1997.

Back in 1997 when a different deal was up, Matt and Trey's lawyer slipped a line of text into their contract that gave the duo a 50% cut of any revenue generated apart from the actual show's television broadcast. For around twenty years, that clause was essentially worthless. Even in 2007, when there were no streaming services or digital advertising, the term wasn't valuable.

So the parties agreed to a new 2007 deal and soon thereafter Matt and Trey launched their own digital hub, South Park Studios. Most importantly, Matt and Trey were entitled to 50% of any revenue that was ever generated by the show digitally.

Fast forward to 2015 when Hulu paid $192 million to become the exclusive streaming home of "South Park" for three years. Matt and Trey got half that money.

Fast forward to 2019 when the deal is up for renewal and the soon-to-be-launched HBO Max paid $500 million to be the show's exclusive streaming home for five years. Matt and Trey got half that money.

Unbelievably, even with today's $900 million deal, Matt and Trey are not giving up their 50% digital rights ownership. For context, this is not like when George Lucas sold the rights to "Star Wars" to Disney. Matt and Trey are getting $900 million just to keep creating content without actually selling anything. According to Bloomberg, their 50% digital stake is now worth an additional $1 billion.

And "South Park" isn't the only pillar in the Parker/Stone empire. The duo also created "The Book of Mormon," which is one of the most-successful musicals of all time. To date, even after being shut down due to COVID, "Mormon" has generated over $500 million in revenue. The musical has won nine Tony Awards and a Grammy.

Finally, according to Bloomberg, through a separate $600 million deal signed earlier this year with a private financial firm, Matt and Trey are currently producing documentaries, video games and are launching a weed business.

We currently peg Trey Parker's net worth at $600 million and Matt Stone at $700 million (Matt's a little higher because Trey has been married and divorced twice). I think it's safe to say they'll both hit billionaire status in the near future. Imagine that. South Park BILLIONAIRES!