There are tens of thousands of stories of epic gambling runs floating around Las Vegas, but none are as legendary as that of Archie Karas. Karas made his living shooting pool and playing poker in Las Vegas, a city where this is a thing you can do to pay the bills. During a very well documented streak that started in late 1992, Karas turned $50 into $40 million.

It all began in 1992, when Archie Karas (born Anargyros Karabouniotis in Greece) drove to Las Vegas with $50. He was 41 years old and had made his way to the United States working as a waiter on a cruise ship. Once he was in the U.S., Karas worked at a restaurant in Los Angeles that was next to a bowling alley and pool hall. He honed his pool skills and eventually made more money playing pool that he did as a waiter. When he could no longer find worthy opponents to play against, he headed to card rooms to play poker. Karas became a skilled poker player quickly and built his winnings to more than $2 million. In December 1992, he lost all but $50 playing high stakes poker. This was when he decided to go to Las Vegas to find a bigger game.

Karas was a professional gambler (in other words, don't try this at home, folks) and after arriving at The Mirage, he started the hot streak that has come to be known as The Run. At The Mirage, Karas ran into a poker player he knew from L.A. and convinced him to loan him $10,000. Why would someone just hand over $10,000? Well, the high roller was well aware of Karas' skill. He lent him the money happily and stood by and watched as Karas turned $10,000 into $30,000 after just a few hours at the poker tables. Karas gave the high roller $20,000 and took the remaining $10,000 to try his luck in the pool halls.

Once Karas got to the Vegas pool hall, he ran into a fellow pool shark known as Mr. X. Karas knew Mr. X from the pool hustling circuit and the two agreed to play a game. They started out with small bets, just $5,000 a game. This became a regular thing between Karas and Mr. X. They met consistently over the next two and a half months to play pool for ever increasing amounts of money. The series between them peaked when Karas and Mr. X agreed to play for $40,000 per game. Hundreds of thousands of dollars changed hands every night.

During one incredibly competitive game, Karas lost $320,000 in about 40 seconds when Mr. X sank the 9 ball on his break eight times out of 10. This rattled Karas. It also meant he didn't get to shoot even one ball during those games.

Karas was still up money wise, even after that astounding feat by Mr. X. Karas had made $1.2 million from Mr. X at this point. It was then that he decided that Mr. X was too good to beat regularly. However, being a professional gambler, Karas was well aware that Mr. X wasn't going to take kindly to just letting Karas walk away with more than a million dollars of his money. Karas proposed a venue change and suggested the two go play some poker. 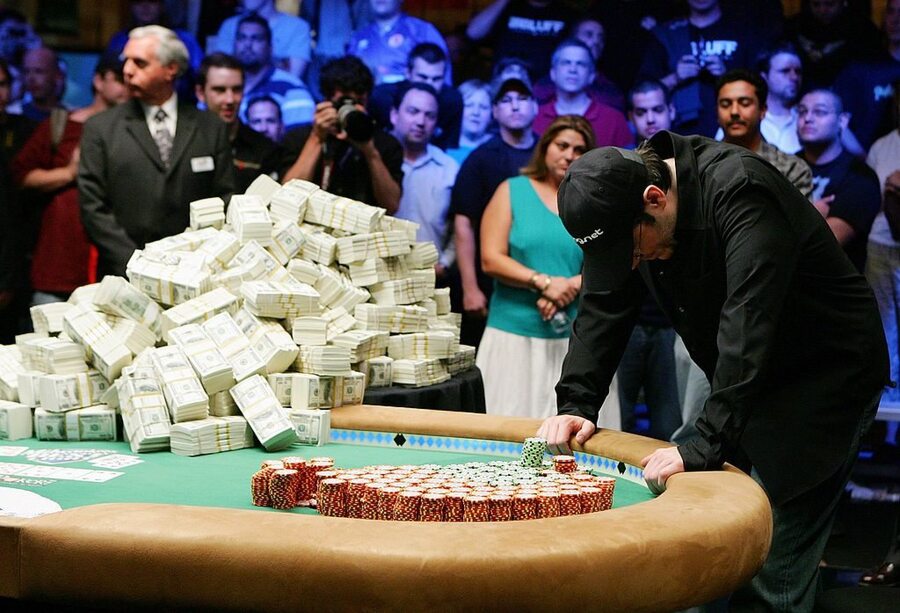 Not surprisingly, the stakes between Karas and Mr. X quickly escalated in poker as well. It was not long before they were playing seven card stud at $15,000 and up per hand. After three weeks of this, Karas had another $3 million in winnings. Combined with his other gambling, Karas was up $7 million after three months.

Karas could have invested that money and been set for life, but let's be real – that is not what professional gamblers do. Instead, he found the highest stakes poker table at Binion's Horseshoe and made it his own. He put $5 million in chips in front of him. To further intimidate potential opponents, from time to time he would walk away from the table to go to the bar, leaving the $5 million just sitting there as if it was too small an amount for him to care about. Of course, in reality, casino security personnel were watching the money like hawks.

Karas won an additional $10 million facing off against some of the best poker players of the time over the next six months. During this hot streak, Karas continued to raise the stakes against his opponents. Eventually, he was playing games with stakes set at half a million dollars. This backfired on Karas as it scared away almost every high-roller in the city.

Karas lost only one game in six months of playing high stakes poker in Las Vegas. He was bored, so Karas took his $17 million to the dice tables at Binion's. Karas convinced the casino to let him bet $100,000 per dice roll, which was 20 times more than any other casino allowed. Karas even convinced the owner of the casino to let him bet $200,000 on a single roll of the dice. That privilege was quickly cancelled when Karas won almost a million dollars on two consecutive rolls of the dice.

One day, Karas was on such a roll that he won nearly every single $5,000 chip (the highest value chip at the time at Binion's) that the casino had. He walked out of the casino carrying $3 million in cash, which he casually tossed onto the passenger seat of his car to drive to the bank.

When that streak was over, Karas was up another $13 million, bringing his two and a half year winnings to more than $40 million.

There are many stories of winning streaks in the history of Las Vegas. They all have one thing in common. At some point, they stop cold.

Over the next few weeks, Karas lost a boatload of money. Karas lost 75% of his fortune playing baccarat ($17 million), dice ($11 million), and poker ($2 million). This shook the usually stone cold Karas to his core. He returned to Greece for a few weeks to regroup and catch his breath.

Of course the lure of Las Vegas is strong to many, but especially to professional gamblers who make their bread and butter in the casinos. Karas returned to Las Vegas and lost another $10 million. This left Karas with about $1 million. He had a short hot streak at this point, winning $2 million in one high-stakes poker game. He took those winnings to the dice table and lost it all immediately.

Karas was now broke. He had lost over $40 million in a month's worth of gambling.

That didn't stop Karas, however. He continued to gamble, winning and losing millions of dollars several times over the next 20 years.

Karas will never be able to string together a winning streak like he did from late 1992-1995. Why? Because in 2015, the Nevada Gaming Commission added Archie Karas to their list of people banned from gambling in the state (the "black book"), after he was found to have marked cards in a blackjack game in 2013.