By Brian Warner on August 31, 2021 in Articles › Entertainment

Not only has Vicki consistently been been one of the highest-paid celebrities in China for the last two decades, she is also a savvy entrepreneur.

In America, Zhao's level of success would land her on the front page of the Wall Street Journal. In China this kind of success has landed Vicki in extremely hot water with her government. To the point where she was recently deleted from Chinese internet and streaming platforms and then had to hop on a private jet, flee the country and might be living on the run at this very moment. 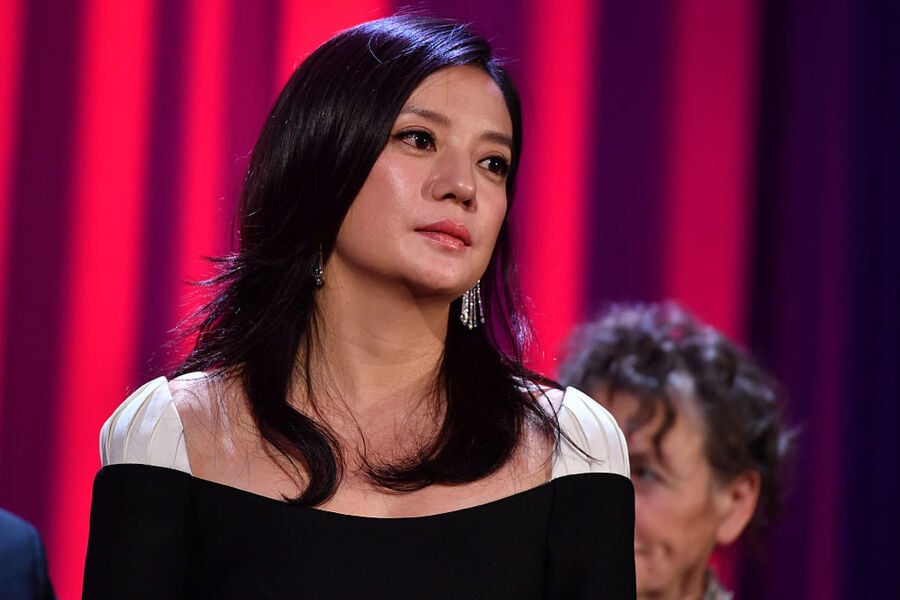 Zhao Wei was born on March 12, 1976 in Wuhu, Anhui, China. In high school a movie called "A Soul Haunted by Painting" was being filmed in Wuhu and Zhao landed a non-speaking cameo role as a prostitute in a brothel. It was her first acting experience and she was hooked.

At 18 she moved to Shanghai and enrolled in an acting school. In 1996 she landed a coveted admission to Beijing Film Academy's School of Performing Arts. She had the highest admission test scores of any applicant in the entire country that year.

Four years later she graduated with a Bachelor Degree in Performing Arts. She had nearly perfect grades at the school and received a 90 out of 100 on her senior thesis.

In 1998, while still studying at the Beijing Film Academy, Zhao began appearing on a TV series called "My Fair Princess." The show became an unexpected sensation, garnering massive ratings all over Southeast Asia and propelling Zhao to a household name overnight. The role eventually earned her the Chinese version of a Best Actress Emmy.

In 2001 she shifted her focus to films, starting with a movie called "Shaolin Soccer." Over the next two decades Zhao appeared in dozens of movies, many of which were box office smashes. She could easily demand a salary of $10-20 million per movie.

In 2012, a time when she was one of the country's most-famous celebrities, Zhao decided to go back to school. She enrolled back at the Beijing Film Academy and earned an MFA from the school's directing institute.

A year later her directorial debut, "So Young," was released. In its opening weekend the movie earned 141 million yuan, making Zhao Wei the first female director whose debut film earned more than 100 million yuan. Within a week the movie had earned 350 million yuan. It eventually earned 700 million yuan. That's the same as around $109 million USD. At that point it was the fifth highest-earning movie in Chinese box office history.

Over the years Zhao has had endorsement deals with well over 100 major brands. Some of the most significant brands in her endorsement portfolio include Versace, Motorola, Samsung, DeBeers, Dior and Mercedes Benz. She is currently the Chinese primary ambassador of Italian brand Fendi.

Alibaba Pictures and Other Investments

Here's where things get interesting AND where Zhao Wei inadvertently set herself up for some future trouble.

A few months later, in December 2014, Jack reached out to Zhao Wei and her husband Huang. At his encouragement they decided to invest in Alibaba Pictures.

Zhao and Huang paid the equivalent of $400 million (that's how rich she already was) for a 9% stake in the production company. So at this point the company was worth around $4 billion

Alibaba Picture's stock price proceeded to explode. Just six months later the company was worth $10 billion. After taxes and some dilution, today Zhao's Alibaba stake was worth north of $1 billion.

With their now-extreme wealth, Zhao and Huang proceeded to make other venture capital investments. Through their investment company, Longwei Culture & Media, they bought an animation studio and a mobile gaming company. They eventually listed both on the Shenzhen Stock Exchange.

They also paid $8 million for a winery in France called Chateau Monlot.

In 2018 Zhao and Huang received a 5-year ban from Chinese securities markets. According to reports at the time, the couple used her celebrity to announce a planned acquisition of a company that they maybe did not actually intend to buy or could not afford to buy. But life went on.

On Thursday of last week, Zhao was essentially scrubbed from the Chinese internet. Many of her shows and movies were simply deleted. The ones that were left up removed her name from the credits. Her fan pages on Chinese social media sites have been deleted. All discussion of Zhao on social media is banned. People using hashtags related to her name will find that the text gets automatically deleted.

Why is this Happening?

Chinese authorities have recently launched a campaign to crackdown on celebrity "fan" culture. Perhaps because she is one of the most famous, and likely the richest Chinese celebrity, that makes Zhao Wei a prime target for authorities. Her connection to Jack Ma has also not helped. Jack has been under attack by Chinese regulators for months. The regulators went so far as to scuttle the planned IPO for his payment company, costing the mogul billions.

Over the weekend, after she had been effectively deleted from the world, Zhao and her husband were reportedly seen boarding their private jet and fleeing from a Chinese airport. Hours later, that same jet was reportedly spotted landing in Bordeaux, France, not far from where they own their vineyard.

Imagine how weird it would be if suddenly Jennifer Lopez or Reese Witherspoon were on the run from the US government… flying around on a private jet trying to find save haven. Imagine if the US government ordered that all of Jennifer and Reese's movies be wiped from all streaming platforms. Actually I might support that decision.

The Zhao Wei situation is a major mystery that is unfolding as we speak. We'll keep you posted if we hear any more news her whereabouts.