By Amy Lamare on March 1, 2015 in Articles › Entertainment

Thirty years ago, 46 of the biggest names in music came together to record a song with one collective purpose: Ending the famine in Africa. The group came together in the wake of the revelation that more than one million people died in Ethiopia alone during a famine that lasted from 1983 to 1985. The all-star group gathered on January 28, 1985 at Kenny Rogers' recording studio in Los Angeles to record a tune that would soon be known as "We Are the World," it was written by Michael Jackson and Lionel Richie and produced by Quincy Jones. Superstars like Stevie Wonder, Bruce Springsteen, Cyndi Lauper, Tina Turner, and Ray Charles gathered together for this good cause. Collectively, the super group called themselves USA for Africa, a non-profit foundation that would use the proceeds from the sale of the single to feed starving people in the African nation of Ethiopia, where one million people died during the country's 1983-85 famine.

"We Are The World" was released on March 7, 1985. It was an instant smash hit, going on to sell over 20 million copies. It won three Grammys, an American Music Award, and a People's Choice Award. More importantly, "We Are the World" eventually raised an incredible $75 million ($162,428,055 in today's money) for humanitarian relief efforts. 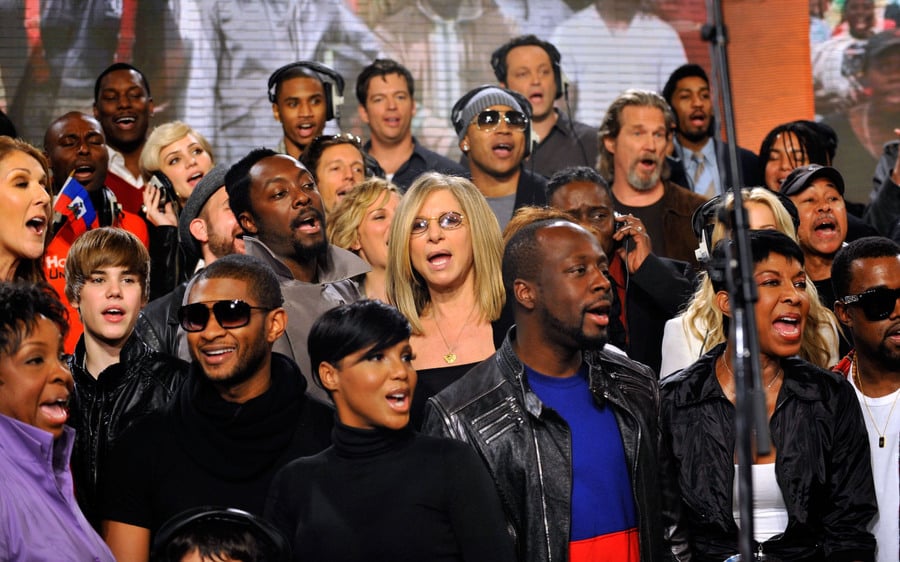 "We Are the World" was the brainchild of singer and activist Bob Geldof who was inspired by the UK all-star charity single "Do They Know It's Christmas?" released a few months earlier. On that January night in 1985, the very same night as the 12th annual  American Music Awards, 46 artists gathered together late at night for a 12-hour recording session.  Most of that night's AMA winners–including Bruce Springsteen, Cyndi Lauper, Huey Lewis, Tina Turner, Hall & Oates, Willie Nelson, the Jacksons, The Pointer Sisters, and Kenny Rogers took part in the recording. Lauper, Richie, and Turner all went to the recording session straight from the AMAs after performing live. In fact, Richie was the host of the AMA's in 1985. Richie has spoken about this historic event in the past, and claims to have no memory of hosting that night's AMAs or of winning five awards, including favorite pop/rock male artist. He said:

"I walked through that door, and I forgot I had done that," he says. "The group of people in that room was so mind-changing. There's Bob Dylan, Billy Joel — give me a freaking break. I had never in my life experienced anything like that."

Each of the performers took his or her position at around 10:30 pm and began to sing. The motto of the evening was "check your ego at the door" –it was posted on a sign on the door.

It turns out that sign wasn't necessary.  Quincy Jones said:

"Here you had 46 of the biggest recording stars in the entire world in one room, to help people in a far-off place who were in desperate need. I don't think that night, that experience, will ever truly be duplicated again. I know and believe in the power of music to bring people together for the betterment of mankind, and there may be no better example of this than the collective that was We Are the World."

Today the song remains the fastest-selling American pop single in history. The song was the first ever single to be certified multi-platinum. Pretty much all of the artists involved would continue to have amazingly successful careers for the next three decades. Let's take a look at how everyone's net worth turned out 30 years later.

Cumulative net worth of all performers: $3.4 billion