The Money Behind Mad Men

The modern classic television series Mad Men has finally come to an end. The American period drama ran on AMC for seven seasons from 2007 to 2015. Mad Men has been wildly popular and has taken home 15 Emmy Awards in addition to four Golden Globes. It was the first basic cable series to ever win an Emmy Award for Outstanding Drama Series and it would do so for each of its first four seasons. Mad Men was ranked the 9th All-Time Greatest TV show by Entertainment Weekly and the 2nd Best TV Show Drama of the 21st Century by Newsday.

A large part of what made the series so popular was the group of actors who portrayed the characters each and every week. Here is a closer look at the actors of Mad Men that appeared in at least half of the episodes of the show and how much they are worth.

Jon Hamm as Don Draper: By the end of the series Hamm was making $275,000 per episode. During the show's first season he started off at $20,000 per episode which was raised to $25,000 in Season 2. For Season 3 his salary quadrupled to $100,000 per episode and then in Season 4, he was making $125,000 a show. Hamm also has a producer credit which is likely to help him continue to make money from the series down the road, from reruns and DVD profits.  He has also been nominated for 11 Emmy Awards for Mad Men. Jon Hamm has a net worth of $30 million.

Elisabeth Moss as Peggy Olson: Moss earned a salary of $175,000 per episode while starring in Mad Men. Her other best known role has come starring as Zoey Bartlet on the NBC television series The West Wing. Elisabeth Moss has a net worth of $8 million.

Vincent Kartheiser as Pete Campbell: Kartheiser's other best known role came starring as Connor in the WB television series Angel from 2002 to 2004. He is married to Alexis Bledel who appeared in three episodes of Mad Men as Beth Dawes. Vincent Kartheiser has a net worth of $5 million. 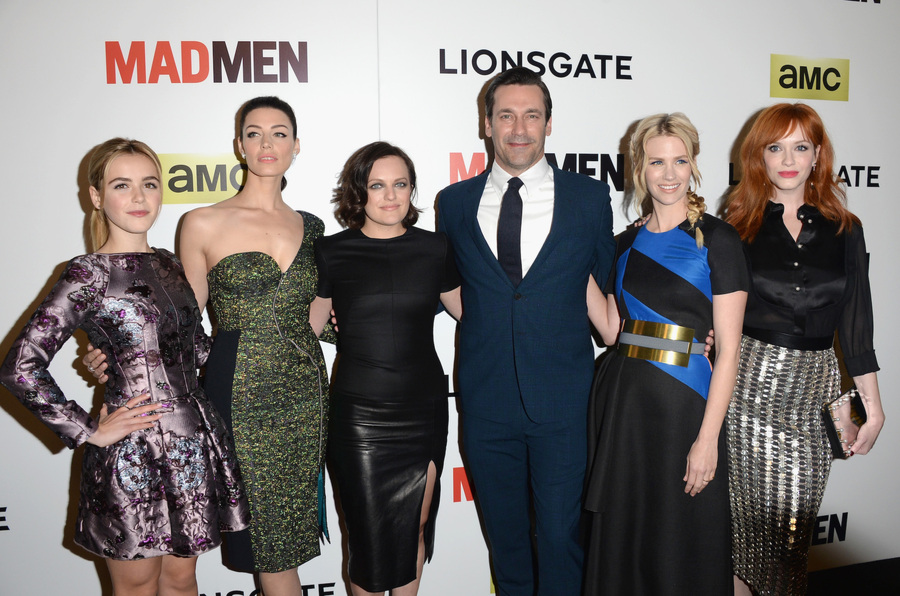 January Jones as Betty Francis: Jones made $100,000 per episode of Mad Men. She has starred in the movies American Wedding, Unknown, and X-Men: First Class.  For her role in Mad Men she has been nominated for a Golden Globe and Emmy Award for Best Actress. January Jones has a net worth of $10 million.

Aaron Staton as Ken Cosgrove: Staton was nominated for a BAFTA Award for Best Video Game Performance for his role in the game L.A. Noire. Aaron Staton has a net worth of $4 million.

Rich Sommer as Harry Crane: Sommer's breakthrough role was starring as Doug in the 2006 movie The Devil Wears Prada. Rich Sommer has a net worth of $4 million.

John Slattery as Roger Sterling: Slattery starred as Howard Stark in the movies Iron Man 2 and Ant Man. He directed his first feature film God's Pocket in 2014. John Slattery has a net worth of $10 million.

Kiernan Shipka as Sally Draper: Shipka voiced the role of Jinora on the Nickelodeon TV series The Legend of Korra from 2012 to 2014. In 2013 she won a Young Artist Award for Best Performance in a TV Series – Recurring Young Actress for Mad Men. Kiernan Shipka has a net worth of $3 million.

Robert Morse as Bertram Cooper: Morse starred in the Broadway and movie versions of How to Succeed in Business Without Really Trying. Robert Morse had a net worth of $5 million.

Jessica Pare as Megan Draper: Pare has starred in the movies Wicker Park and Hot Tub Time Machine. Jessica Pare has a net worth of $3 million.

There were actually hundreds of actors that appeared in Mad Men over its award winning seven season run. Now that the show is over America will have to find a new drama to embrace. What new show do you think will be the next Mad Men?