By Brian Warner on November 24, 2017 in Articles › Entertainment

A few years ago we published a list of the 25 richest people who have ever lived (inflation adjusted) that went really, really viral. As you might imagine, most of the names on that list died more than a century ago. The #1 person, Mansa Musa, died 700 years ago! In fact, of the 25 richest humans ever, only three are alive right now. Those lucky three men are Warren Buffett, Carlos Slim Helu, and Bill Gates. As of this writing, Bill is worth $86 billion and is the richest person on the planet. But that's not the number that landed him on our list. Bill secured his place as the 13th richest human being ever thanks to a very brief and very magical moment that occurred back in 1999.

Side note: If you've checked this site recently, you've probably seen some stories about how Vladimir Putin might be sitting on a secret $200 billion fortune. As of right now, these reports are unconfirmed. If we're ever able to definitively prove that he is worth $200 billion, that would make Putin the 8th richest person of all time. Four spots above Gates. Until more evidence comes in, we're gonna put the Putin wealth rumors aside.

Microsoft went public on March 13, 1986. At the time of the IPO, Bill owned 45% of Microsoft. By the end of the first day of trading, MSFT had a market cap of $780 million which gave Bill a net worth of $350 million. He was in Australia on vacation when the closing bell rang, but when Bill eventually came back to Seattle, he spoiled himself by paying off his $150,000 mortgage.

As we all know, Microsoft (both the company and the stock price) grew at an unbelievable pace after going public. It eventually became one of the most valuable and profitable companies in the world. And with that success, Bill soon became the wealthiest person in the world.

The peak of Microsoft's success (and subsequently Bill's net worth) occurred in the middle of 1999. More specifically, July 16, 1999.

Riding high, just one month earlier Bill had made what was then the largest donation a living person had ever given to a charitable organization when he gave $5 billion to his own foundation to support health care and educational causes.

By that time, Bill's stake in MSFT had been reduced from 45% to a little less than 20%. He owned the equivalent of one billion shares in the tech behemoth. In case you're wondering, today Gates owns around 3% of MSFT.

July 1999 was the height of the dotcom bubble mania. And on the morning of July 16, rumors flew that Microsoft might spin-off its internet assets into a separate company. A separate company that would theoretically have its very own crazy dotcom bubble IPO. This rumor sent shares of MSFT up 5.4% to close at a record high of $99.4375.

At that level, Microsoft as a whole was worth $500 billion. This was the first time that any company had ever broken the $500 billion mark. FYI – Today Apple is worth $740 billion.

As owner of 20% of the company, Bill's net worth momentarily stood at $100 billion. When you adjust $100 billion for inflation, Bill was worth the equivalent of $140 billion in today's dollars. That's enough to make him the 13th wealthiest human being who has ever lived.

When the spin-off rumors were proven to be not much more than fluff, the stock pulled back a bit. But that didn't stop financial pundits, who were clearly caught up in the dotcom mania, from saying that this was just the beginning of Bill's ascent to the top. The executive editor of Forbes actually predicted that Bill was on his way to becoming a trillionaire. Forbes predicted that Bill would achieve trillionaire status in 2004, using the assumption that Microsoft would grow as fast in the next five years as it had in the previous five, which to be fair wasn't all that unreasonable at the time. 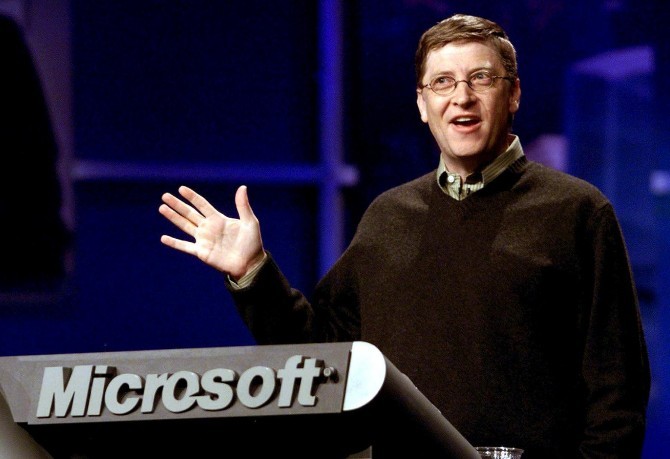 As we all know now, the dotcom bubble was just that, a bubble. The stock stayed in the $90+ range for the rest of 1999 but at the beginning of 2000, the bubble began to burst for Microsoft. By December 2000, exactly one year after hitting those all-time highs, Microsoft's share price had dropped more than 60%. And with that drop, Bill saw his net worth tank from $100 billion in December 1999 to around $40 billion in December 2000.

So there you have it! Can you imagine being worth $140 billion??!! Do you think someone will top that soon? Will it be Bill again? Mark Zuckerberg? Elon Musk? Justin Bieber? Celebrity Net Worth founder Brian Warner? We'll keep you posted.