By Amy Lamare on July 9, 2018 in Articles › Entertainment

If you were going to market a product that helped people sleep better, how would you do it? Mike Lindell, the founder of MyPillow decided that the best way to get his new pillow out to his target audience was to run an infomercial in the middle of the night when the insomniacs were watching. Brilliant. But we're getting ahead of ourselves. Back in the fall of 2008, Lindell was a 47-year-old divorced father of four who was having an issue with crack. He was from the suburbs of Minneapolis and he had been awake for, according to his account, 19 days. He was running a startup that was struggling and determined to make it work. He made a trip into the city to visit his drug dealer and found out his dealer had a conscience. He refused to sell Lindell any more crack until he ended his binge. He also instructed other dealers he knew Lindell used to do the same.

That wasn't the end of Lindell's drug abuse, which by that time had been going on for more than two decades. It started when he owned bars in his 20s. In 2005, he launched MyPillow to fulfill his dream of making "the world's best pillow." By 2008, when his dealer refused to sell him more crack, Lindell came to the realization that being a crack addict and running a business were not compatible. He had one final party on January 16, 2009 and then quit everything – booze, cocaine, and crack.

Today, he runs an empire that is growing by leaps and bounds. In 2016, he opened a second factory and had sales rise from $115 million to $280 million. He's sold more than 30 million pillows. 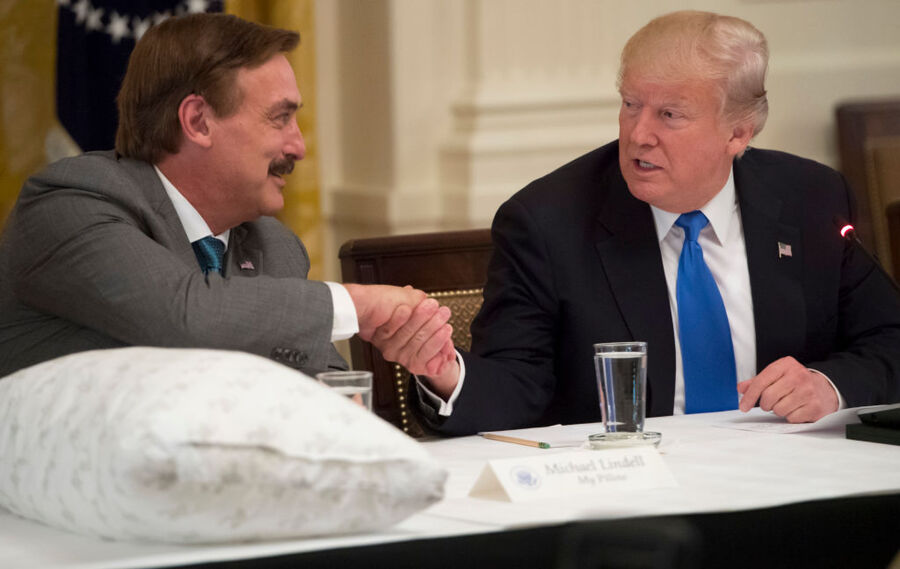 The idea for MyPillow came to him in a dream in 2003. At the time, Lindell owned two bars in the Minneapolis suburbs. He enjoyed that life very much and characterizes himself at the time as a functional drug user with a wife, four kids, and a nice house. He was a good father and husband – other than his pesky cocaine habit.

Lindell had been in search of the perfect pillow for his entire life. He was not a good sleeper – even before his cocaine and crack habits. Long before he was a drug addict, he was diagnosed with sciatica. He was in a terrible car accident. He almost died twice. Once while skydiving and once while on a motorcycle. And then came the cocaine addiction. When he did manage to sleep, it wasn't restful. One morning he woke up, sat at his kitchen table, and wrote "MyPillow" over and over again. He sketched out a rough logo. His daughter wandered into the kitchen, saw her father manically scribbling away on a sheet of paper and asked him what he was doing. He said, with all the excitement of someone high on cocaine: "I'm going to invent the best pillow the world has ever seen! It's going to be called MyPillow!"

Lindell realized that whenever he was happy with a pillow, it was because he found a way to alter it. If it was foam, he'd pull at the insides to break it up and then arrange the torn foam as if he was building a nest. Then he'd finally sleep. The only problem was, by the morning, the pillow had fallen out of its carefully constructed form. Lindell's perfect pillow would be micro-adjustable, but would keep its shape all night long. He bought all kinds of different foams and he and his sons sat out on their deck and tore the foam into pieces of different sizes that they'd stuff into covers to make prototypes. Eventually, Lindell settled on a mix of three sizes of foam. It was exactly the pillow he'd always dreamed of. He believed this pillow would change lives. The problem was ripping the foam by hand was time consuming. He needed a machine to do the tearing.

He eventually found an old, rusty, hammermill—a vintage machine that grinds corn into feed. He rebuilt it and found it worked great for tearing the foam. He made 300 pillows and went in search of buyers. He stopped at every big box retailer in his area. No one wanted it. Someone suggested he try a kiosk in a mall, so he borrowed $12,000 to rent one at a mall for six weeks starting in November 2004. He sold pillows but soon found out that he had priced them too low and was losing money on each sale and that the pillow was too big for standard pillowcases. The kiosk failed. He borrowed more money from the friends still talking to him. He borrowed more against his house. He counted cards at blackjack tables to make money to buy materials. It wasn't long before all of the casinos within a day's drive from him banned him. Every time he hit a roadblock, he relapsed into his drug habit.

The day after he closed the mall kiosk, one of his few customers called him and let him know that his pillow changed his life. That customer ran the Minneapolis Home + Garden Show and wanted Lindell to set up a booth at that event, one of the largest in the country for home products. Lindell took 300 pillows to the home show and sold them all. He also was asked to exhibit at the Minnesota State Fair and did well there. That started a period of a few years where Lindell took his pillows to home and garden shows and fairs across the country.

Lindell and a few salespeople drove from fair to fair with trucks filled with pillows. Lindell was still doing drugs. His marriage broke up. He lost his house after borrowing against it time after time to pay his suppliers. He was heading straight towards that moment where his dealer cut him off. He had that last blowout. He got clean.

Just days after getting clean, Lindell borrowed $30,000 from the owners of a mulching company. He used that money to pay off his foam supplier and sewing company. He then went out to reestablish MyPillow on the show and fair circuit. While he was downward spiraling, competitors started selling knockoffs of MyPillow. His big break came during an interview that ran in the business section of the Minneapolis Star Tribune in January 2011. The morning that interview came out, the traffic on MyPillow's website went crazy. Lindell sold more pillows in a single day than he had in the last six months combined. That uptick in sales lasted three months.

Lindell had no idea that a newspaper could make such a difference. He designed and placed ads that looked like shorter versions of the original story. He spoke about his insomnia, his inability to find a pillow that was comfortable to him. It worked. But he had another idea. He knew he was a hit on the home show and fair circuit because of how passionately he could convey the idea behind MyPillow. He decided to make an infomercial. In August 2011 he booked a studio with an audience. The spot opened with Lindell saying:

"Don't change that channel, because the next half-hour is going to change your life."

He ad-libbed, railing against down pillows as the worst thing that ever happened. Everyone loved it. He flew to New York City to convince his fabric supplier to lend him millions to prepare for all the orders. He had no credit, but he was sure he was going to sell $100 million worth of pillows. The fabric supplier decided to take a chance. He worked the same magic at his foam supplier.

The 30-minute infomercial aired for the first time at 3a.m. on the east coast on October 7, 2011. He bought every infomercial spot he could find. Within six months, he grew from 50 to 500 employees. Oh, and he sold nearly $100 million worth of pillows.

The problem was, Lindell's costs were out of control. He was spending a ton on the infomercial spots, but not tracking which were working and which were wasting money. His foam supplier was concerned and sent its CFO to see what was going on at the MyPillow offices. He found that despite the explosive growth, Lindell was hemorrhaging money. Costs were out of control. Lindell was losing $250,000 a week.

The turnaround started when Lindell was approached by FedEx. The company offered Lindell a shipping rate so low he couldn't believe it. Before that, he'd been paying retail with a number of different shippers. Then Telebrands, the biggest of the "as seen on TV" distributors approached him about selling MyPillow after Lindell threatened to sue them for selling a knockoff. Lindell was having some regrets about all the money he'd spent on the infomercials. Telebrands told him is wasn't wasting money. They told him he'd branded himself faster than nearly any brand in history. Telebrands also told Lindell that 80% of customers want to touch and feel a product. Telebrands told him they could get his pillow into Bed Bath & Beyond and Walmart. Lindell didn't want to be at Walmart. He thought he'd have to sell his pillow for less. The rep for Telebrands said that wasn't the case. They could up the price at Walmart.

MyPillow sold like hotcakes from the moment they arrived at Walmart. Now long after Bed Bath & Beyond, QVC, and Home Shopping Channel wanted MyPillow too. Today, MyPillow is one of Telebrands' top five brands.

In January 2016, Lindell told his board of directors that he'd had another dream: MyPillow was going to become a billion dollar company. He had just opened a 100,000 square foot factory. In the factory, pillows are made at the rate of 12 per minute—37,000 per day. The entire process is automated. Fewer than 3% of MyPillows are returned.

MyPillow branded itself as the cure for nearly every sleep problem and many health ailments such as joint pain, restless leg syndrome, and fibromyalgia. According to the company's ads, MyPillow could cure it all. In the fall of 2016, Lindell settled with 10 district attorneys in California who sued MyPillow for false advertising. They argued that MyPillow's claims had no scientific backing. Lindell and MyPillow settled for $1 million and agreed to remove those claims from advertising in California. Eventually, Lindell pulled those claims from all ads to avoid additional lawsuits.

The lawsuit didn't slow the company down. Lindell set out to buy more media and continue the push to becoming a $1 billion company. I wouldn't bet against Lindell. After all, it was just a decade ago that he was on a 19-day crack binge. Today Mike Lindell has a net worth of $200 million.