By Amy Lamare on October 28, 2019 in Articles › Entertainment

Kleptocracy – from the Greek word meaning "I steal" – a kleptocracy is a government with corrupt leaders that use their power to exploit the people and natural resources of their country in order to extend their personal wealth and political power. Typically, this system involves the embezzlement of funds at the expense of the wider population.

This practice is still alive and sometimes well. Even just a decade or so, again, corrupt leaders in non-Western nations could get away with looting their countries for their own benefit. An example of that is in the West African nation of Equatorial Guinea, where Teodorin Obiang, the playboy son of President Teodoro Obiang Nguema Mbasogo, who openly plundered more than $115 million in funds from his country through a fake tax that he imposed on the sale of wood. As a government official, he collects a salary of less than $100,000. He then used that money to buy a luxury jet, mansions in Paris and Malibu, and, bizarrely, Michael Jackson memorabilia. He allegedly spent $500,000 on the King of Pop's famous crystal-encrusted glove. 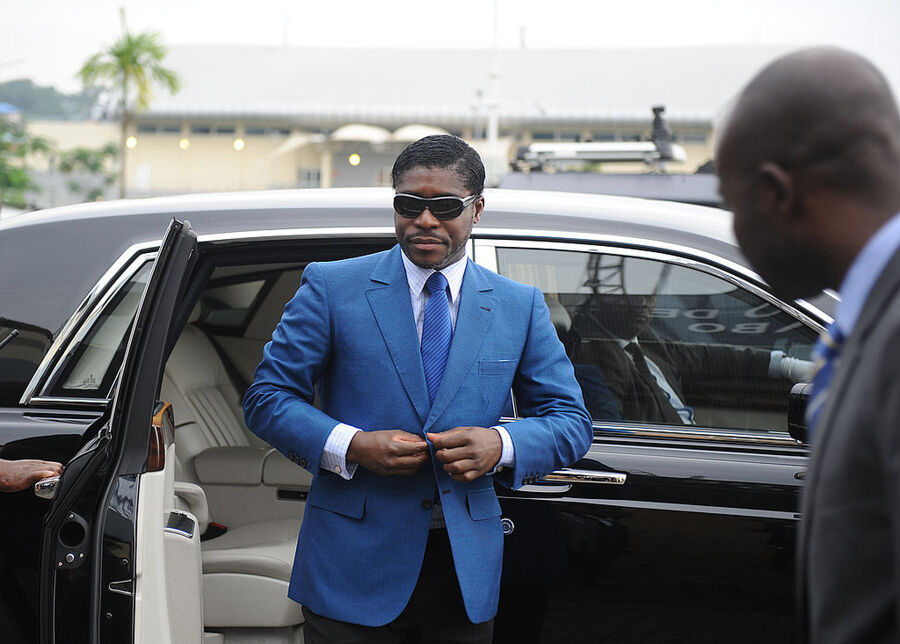 Obiang's father came to power in Equatorial Guinea via a violent coup in 1979. He has been in power ever since, winning election after election with a suspicious 90% or more of the vote. President Obiang's detractors claim he takes part in cannibalism. Human rights groups allege that he uses unlawful arrests, torture, and extra-judicial killings to control the populace. Meanwhile, his son is gallivanting around the world, spending money, and enjoying his life of luxury. The younger Obiang is the vice president of defense and security in his father's administration.

In 2011, France launched an investigation into Teodorin Obiang. He was accused of money laundering and French authorities confiscated luxury cars, furniture, and art from Obiang's $180 million Paris home. The art, including works by Renoir and Degas, was worth $50 million.

In 2014, the U.S. Department of Justice accused Obiang of money laundering as well and seized 28 rare cars, a Gulfstream Jet, and his $30 million Malibu mansion.

In 2016, authorities in Switzerland accused Obiang of money laundering and seized 11 of the world's rarest and most expensive luxury cars from Obiang, including a $2.6 million Bugatti Veyron. Those cars also included a Lamborghini Veneno, a Porsche 918 Spyder, a Maybach, a McLaren P1, an Aston Martin, four Ferraris and a rare Koenigsegg sports car that is one of only seven ever made and sells for $2.8 million. Criminal charges were filed against Teodorin Obiang after his cars were confiscated at the Geneva airport.

Obiang has denied wrongdoing in each of the three countries where he has been accused of wrongdoing. He has also tried to claim diplomatic immunity, but France rejected this, saying that the charges relate to his private life in France, not his official functions.

Rather than lying low while that investigation plays out, Obiang showcased his lavish playboy life across social media. Obiang posted photos of himself skiing, driving luxury cars, scuba diving, hanging out with lions, dining in 5-star restaurants, drinking champagne, partying with half-naked women, enjoying helicopter rides, motorcycles, speed boats and more. Many of the photos he has shared take place on the grounds of enormous estates.

Three-quarters of his West African nation live well below the poverty line. Meanwhile, Obiang, who posts on Instagram under the name Teddy Nguema, shows no remorse for spending lavishly and bragging about his life of wealth and privilege. Teddy has posted more than 800 photos of himself in Hawaii, Tahiti, St. Bart's, Trinidad and Tobago, Capri, Portofino, Hong Kong, Aruba, Brazil, Dubai, Switzerland, the Bahamas and more. He has posted pics on private jets and driving what looks like the Batmobile. The photos often feature him wearing designer clothes and expensive watches.

As you can imagine, the comments on his photos from his fellow countrymen express outrage over his jet setting lifestyle. His nation is so poor that 20% of children die before the age of five and more than half the population is without access to clean drinking water. Many struggle to even afford a loaf of bread.

According to prosecutors in the French case, Obiang has a compulsive need to spend. He spent the money he siphoned out of his country on his lifestyle.

Obiang did not appear at the trial in Paris. However, a former majordomo and governess he employed are expected to testify that Teddy came to Paris with suitcases full of cash and paid for his lavish lifestyle and luxury goods mainly in cash.

His attorneys claimed that he should have diplomatic immunity.

Obiang's Instagram account was used as evidence in the trial. This is far from the first time he has been on trial for money laundering, embezzlement, and corruption. If he keeps up this behavior, before long he might run out of countries he and his suitcases full of cash can run to!

Results of the Lawsuits

In October 2014, Obiang reached a settlement with the U.S. Department of Justice to pay some of the funds held in accounts on his behalf as well as the Malibu mansion, a Ferrari, and part of his collection of Michael Jackson memorabilia. The total value of this settlement was $34 million. Obiang was allowed to keep his Gulfstream Jet, key pieces of his Michael Jackson collection including the crystal glove, and other assets. The DOJ's website reported that $20 million of the $34 million would go to a charitable foundation for the benefit of the people of Equatorial Guinea. Another $10.3 million was pledged to be used for the benefit of the people of Equatorial Guinea. No funds have ever been sent to the citizens of Equatorial Guinea.

In September 2016, the Criminal Court of Paris issued an arrest warrant for Obiang through Interpol. The trial concluded in October 2017. Obiang received a suspended sentence of three years and a fine of $33 million. His French properties and 17 luxury cars were also seized.

In October 2016, Swiss prosecutors opened an investigation into Obiang after he landed his jet eight times in a short period of time in Geneva. France had asked Switzerland for judicial assistance. Obiang never went to trial in Switzerland. He reached a settlement with the Swiss government to allow them to sell those 11 seized luxury cars and pay a fine of $1.3 million. In 2019, Bonham's auctioned off the cars for a total of $24.5 million.

A quick perusal of Obiang's Instagram account shows he's still out there living the jet setting lifestyle. On September 22, 2019 he posted a photo of himself on an Indian motorcycle. There are recent pictures of him on the hood of a sooped-up Jeep, on a boat in Capri, Italy, on safari in Zambia, and at Carnaval in Trinidad.

But it also looks like he's facing new charges in a new country. In September 2018, authorities in Brazil seized $16 million in cash and luxury watches from Obiang. Brazil limits people from entering the country with more than $2,400.

Still, Obiang and his father are still widely believed to continue to plunder their country's oil resources to line their own bank accounts. Kleptocracy is alive and well, though sometimes slapped on the proverbial wrist, which is all the U.S., France, and Switzerland were able to do.