By Amy Lamare on January 23, 2020 in Articles › Entertainment

For anyone who worked in Hollywood in the 1990s, the name Jon Peters conjures up fear and awe. Together, with Peter Guber, he basically ran the entertainment industry for the better part of a decade. It is Peters who we have to thank for the global superhero movies. He did it first in the 1990s, with Batman movies. Now he's in the news again because he and Pamela Anderson just got married in a secret ceremony. The two have been friends for decades, but the marriage comes as a surprise to all. Anderson's publicist released a statement on Tuesday, January 21 saying: "They are very much in love and were married yesterday."

The couple has known each other for three decades. Peters has been married four times before he married Anderson. His marriage to Henrietta Zampitella ended in 1966. In 1967, he married actress Lesley Ann Warren. They divorced in 1977. From 1987 to 1993, he was married to producer Christine Forsyth-Peters. In 2001, he married Mindy Peters. They divorced in 2004. Anderson, of course, was previously married to drummer Tommy Lee from 1995 to 1998. She was married to Kid Rock in 2006. She married and divorced producer Rick Soloman twice in 2007 and 2013. Maybe the fifth time is the charm for the 74-year-old producer and 52-year-old actress. One thing is for certain, Anderson married a Hollywood legend. 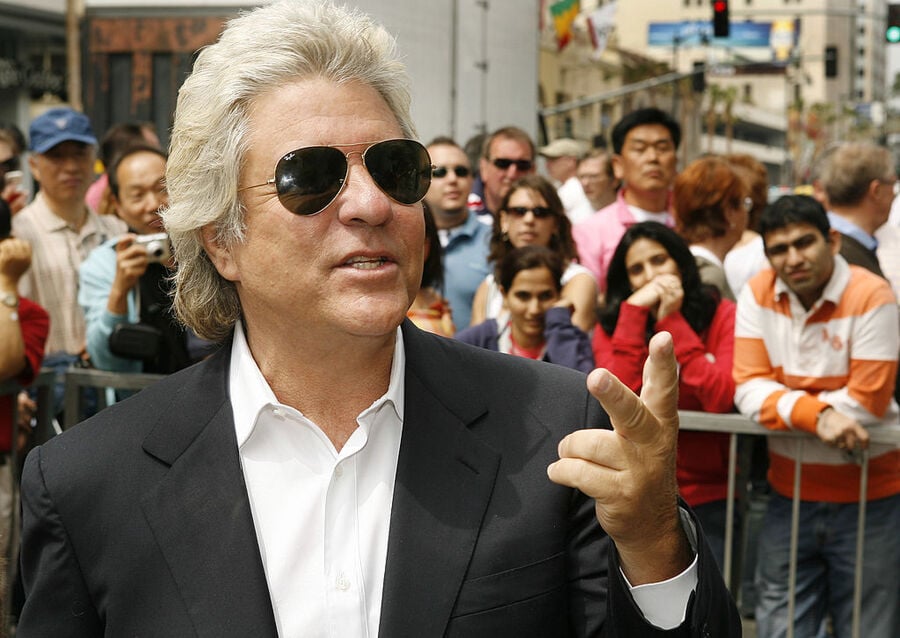 Peters was born June 2, 1945 in Van Nuys. The family business was hair. His mother's family owned a renowned salon on Rodeo Drive in Beverly Hills.  Jon became a hairdresser in his family's salon and by the early 1970s, he was the hottest hairdresser in Beverly Hills with a long list of celebrity clientele. In 1974, he was hired to design a wig for Barbra Streisand for the comedy film For Pete's Sake. Peters and Streisand met on the set of the film and the connection was immediate. He was married to Lesley Ann Warren at the time, but he started an intense relationship with Streisand. It wasn't long before he was her most trusted confidant. He produced her 1974 album ButterFly and produced her movies. By the time Streisand was in production on A Star Is Born, their affair was in full swing and drew the kind of media attention that Brad Pitt and Angelina Jolie got during their relationship and divorce. A Star Is Born made over $100 million at the box office on a budget of just $6 million and received four Oscar nominations. Peters and Streisand were together for 12 years, longer than any of Peters' marriages. They remain friends to this day.

Peters' other lasting partnership was with his former business partner Peter Guber. In 1980, Peters and Guber formed the production company, Boardwalk. Their first box office hit together was Flashdance in 1983. Together, Peters and Guber also produced Caddyshack, An American Werewolf in London, and The Color Purple. The success of Flashdance led to a lucrative producing deal at Warner Brothers, where the pair made Tim Burton's Batman movies. The first Batman movie made more than $400 million worldwide on a $35 million budget. Those movies were the first time a superhero movie franchise became a global pop culture phenomenon. Peters and Guber had exactly zero experience running a movie studio but that didn't bother Sony, which made them co-chairmen in 1989. Sony paid Warner Brothers $500 million in 1989 to release Peters and Guber from their contracts. Peters and Guber's tenure at Sony was marked by crazy spending – they had Heidi Fleiss as a billable service in their budget – but not great box office results. While running Sony, Peters and Guber oversaw the production of dozens of very high profile and very expensive movies, many of which flopped. They oversaw the spending of $8 billion on production and other costs, ultimately causing Sony to lose more than $3 billion during the Peters-Guber tenure. Peters was fired in 1991 and Guber was fired three years later in 1994. Each was given a $30-50 million severance package. The relationship between Peters and Guber soured after that. Today, Guber is an owner of the NBA's Golden State Warriors.

In the early 1990s, Peters bought the film rights to the Superman franchise from Warner Bros. He clashed with Kevin Smith on early drafts of the script and that project ultimately died. It was reborn in the 2000s with 2006's Superman Returns and 2013's Man of Steel. Peters got producing credit on both films. Peters earned $85 million from those two movies alone, without having anything to do with the actual production. He was actually forbidden from visiting the set of Man of Steel by producer Christopher Nolan. He served in a similar capacity for 2018's "A Star Is Born" remake.

Today, Jon Peters has a net worth of $300 million. But how did the whole marriage to Pamela Anderson happen? It wasn't all that long ago that she was licking her wounds from her relationship with 34-year-old French soccer player Adil Rami. The two were reportedly engaged at one point. Well, it turns out that Peters and Anderson have known each other since meeting at the Playboy Mansion in the mid-1980s. They dated briefly back then and even live together at one point. Peters says he tried to talk her out of doing Playboy. Anderson didn't listen to him. In fact, she went on to be on the cover of Playboy 13 times. Peters also claims to have been the person who picked her and her kids up when Tommy Lee beat her up.

Reportedly, after knowing each other for 35 years, Peters and Anderson rekindled their romance a few months ago and kept it on the down low. Peters told The Hollywood Reporter: "Pamela has never seen her full potential as an artist. She has yet to shine in a real way. There is much more to her than meets the eye, or I wouldn't love her so much. There are beautiful girls everywhere. I could have my pick, but – for 35 years – I've only wanted Pamela."

When Anderson was asked for her comment, she sent The Hollywood Reporter a poem:

"Jon is the original 'bad boy' of Hollywood — no one compares —

His life used to scare me.

So much for a girl like me. Now I've seen more of life and realize …

He's been there all along. Never failed me —