The Incredible Rise And Shocking Fall Of Suge Knight

Suge Knight has been making the news for decades – for all the wrong reasons. In February 2015, Marion "Suge" Knight was charged with murder and attempted murder after a fatal hit and run car accident in his hometown of Compton, California. Knight has pled not guilty to all charges. He claims it was self-defense. Knight is now a resident of the Men's Central Jail in downtown Los Angeles. Just this week, a judge set his bail at $25 million, causing the Death Row Records founder to collapse in court, presumably from the shock.  He was rushed to the hospital but has since been returned to a jail cell.

It is hard to remember what rap music – commercial rap music at least – sounded like before Suge Knight and Death Row Records. The only hip-hop you heard on the radio or in clubs in 1991 was cleaned up, sunny, cheery rap from the likes of Marky Mark (now known to all as respected actor Mark Wahlberg):

"Yo, it's about that time to bring forth the rhythm and the rhyme."

There was a strong divide between the hip-hop you heard on the streets of Harlem or Compton and that which was played on the radio. What Suge Knight and Death Row Records did was break down that divide and make the most hardcore street hip-hop mainstream across the globe. 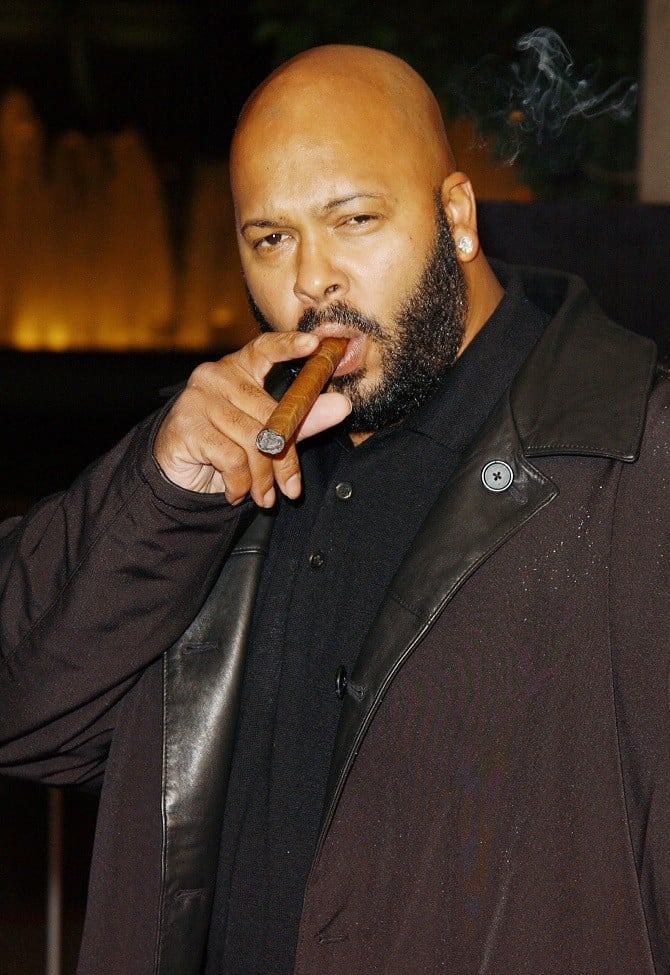 Marion Hugh Knight was born on April 19, 1965 in Compton. California. His nickname "Suge" was given to him as a child and is short for Sugar Bear. He was a football and track star at Lynwood High School. He graduated in 1983 and went on to El Camino College on a football scholarship. In 1985, he transferred to the University of Nevada, Las Vegas, playing for the Rebels for two years.  After college, Knight was not drafted by an NFL team, but during the 1987 NFL players' strike, he became a replacement player. He played two games for the Los Angeles Rams. After football, he worked for a time as a concert promoter for acts such as Bobby Brown.

Knight was first arrested in October 1987 for domestic violence. He assaulted his then girlfriend and cut off her ponytail on the street. Then, on Halloween night 1987, Knight was arrested for grand theft auto, carrying a concealed weapon, and attempted murder in Las Vegas. He allegedly shot a man three times in the act of stealing his car. Knight pled guilty to a lowered misdemeanor charge and served two years probation.

In 1989 Knight founded a music publishing company. This led to forming an artist management company which led to him meeting members of the legendary gangsta rap group N.W.A.  Dr. Dre and The D.O.C. wanted not just to leave N.W.A., but also their label, Ruthless Records, which was run by another member of N.W.A., Easy-E. Knight and his cronies allegedly threatened Easy-E and N.W.A.'s manager with lead pipes and baseball bats to coerce them into letting Dre and The D.O.C., out of their contracts.

Knight became involved in a feud with East Coast rapper Sean "Puffy" Combs of Bad Boy Records. He threw fuel on the fire when he insulted Combs on air at the 1995 Source Awards.  The lines were drawn for an East Coast rap/West Coast rap blood feud.

Also in 1995, Knight offered to post $1.4 million in bail for Tupac Shakur if the incarcerated rapper would sign with Death Row. Shakur agreed and in 1996, Death Row released the double album "All Eyez on Me."

During its reign, Death Row Records sold more than 50 million albums worldwide and generated an estimated $750 million in revenue.

On September 7, 1996 Tupac Shakur was shot multiple times in a drive-by shooting in Las Vegas. He died six days later on September 13, 1996

Dre soon left Death Row. He was frustrated with the label's thuggish image and Knight continued skirting of the law and violent tendencies, so he formed his own label.

On March 9, 1997, Tupac's East Coast rival, The Notorious B.I.G. (aka Biggie Smalls) was murdered in Los Angeles in a similar drive-by shooting. Rumors began to circulate that Biggie's murder was orchestrated by Knight as revenge for Tupac's murder. Snoop Dogg and other former Death Row artists would later assert that Knight was also involved in Tupac's murder. The theory was that Tupac, seeing success with the hits "California Love" and "How Do U Want It?" was poised to depart Death Row records, and Knight murdered him for it. He then conspired to kill Biggie to draw the attention away from the speculation that he murdered Tupac. Nothing was ever proven about these allegations but irreparable damage to Knight's reputation was done.

Legal troubles continued to plague Suge Knight. In 1996, he was sent to prison for a probation violation. In February 1997, Knight was sentenced to nine years for that violation. He was released from prison in August 2001.

He was sent back to prison in 2003 for violating his parole when he hit a parking lot attendant.

The fortunes of Death Row Records had taken a turn for the dire with their founder's incarceration.  Knight filed for bankruptcy on April 6, 2006 due to litigation against him. Though it was alleged he had money hidden in foreign bank accounts, an actual accounting of Knight's wealth revealed just $12 in his bank account, clothing worth $1,000, furniture and appliances worth $2,000, and jewelry valued at $25,000. Knight claimed to be $137 million in debt, with $12 million in IRS liens, and $51,000 in monthly expenses. On July 7, 2006 a federal judge ordered a bankruptcy trustee takeover of Death Row Records, charging Knight with gross mismanagement.  He sold Death Row records in 2008.

Suge Knight was arrested on drug and aggravated assault charges on August 27, 2008 after leaving a Las Vegas strip club. When the LVPD arrived on the scene, Knight was beating up his girlfriend and brandishing a knife. The girlfriend, Melissa Isaac, who had been with Knight for three years, did not press charges in the incident.

In March 2009, a group of five armed men broke into the house of Akon producer Noel "Detail" Fisher. They claimed to be collecting on a debt on behalf of Knight. A locked safe, key to a Mercedes, stereo equipment and $170,000 worth of  jewelry was stolen.

Suge Knight was arrested in Las Vegas on February 8, 2012 after police found marijuana in his car. He was given three years unsupervised probation for driving with a suspended license.

On August 24, 2014 Knight was shot six times at a pre-Video Music Awards party hosted by Chris Brown in Los Angeles. He was, however, able to walk from the party's venue to the ambulance.

On October 29, 2014, Knight and comedian Katt Williams were arrested in Beverly Hills for the theft of a camera from a photographer. The men were charged with second-degree robbery. Knight was scheduled to return to court on January 27, 2015 for this charge, however…

The Most Recent Arrest And Charges

Back to that recent arrest. On January 29, 2015, Knight was involved in a hit and run at a burger stand that left one man dead and another hospitalized. Knight turned himself in to the Los Angeles County Sheriff's Department and was subsequently arrested on suspicion of murder. Terry Carter, co-founder (along with Ice Cube) of Heavyweight Records was killed. He was a friend of Knight's. Cle Sloan, the second victim had a mangled foot and head injuries. Witnesses stated that Knight followed the men after an argument on the Straight Outta Compton film set. His actions looked intentional to bystanders. Security video footage shows Knight clearly running over both men.

Knight's two count felony conviction from the 1990s could lead to life behind bars for the rap mogul under California's three strikes law. 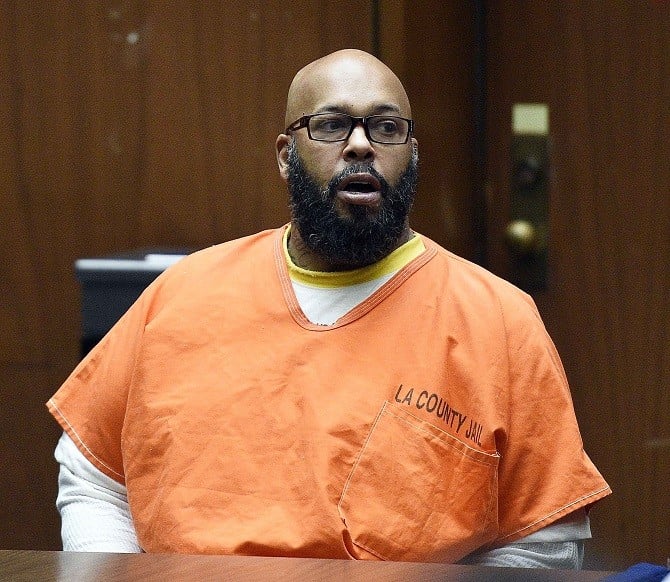 Suge Knight and Death Row helped make Snoop Dogg and Tupac Shakur stars. It put West Coast gangsta rap on the charts. But it wasn't enough to outweigh Knight's violent inclinations. When Death Row was founded, no one had yet taken the LA sound, style, and image and turned it into multiplatinum albums. Knight and Dre changed culture with Death Row. However, while Dre and Snoop were able to forge careers in the gangsta image, they've also been able to thrive in it with legitimate business pursuits. Dre is nearly a billionaire right now across different media and businesses. Snoop Dogg has branched out into TV projects and other businesses and is worth over $100 million.  They expanded and grew. Knight didn't. Knight wasn't ever able to move on and grow from (and out of) the violent place that gave birth to Death Row Records.