The Fascinating Life Of John DeLorean And His Life Of Cocaine, Hot Chicks, And Sports Cars, Brought Down By FBI

By Amy Lamare on August 11, 2019 in Articles › Entertainment

Do you remember the car Marty McFly used to go back and forward in time in Back To The Future? That car, a DMC-12, commonly called a DeLorean is the vision of automotive mogul John DeLorean. The 1980s sports car with the gull winged doors and stainless steel body stood out from any car of that era. It still stands out. We all recognize it. But did you know the car was built in Belfast? And did you know that by the time the car hit the market, DeLorean's company had already gone under due to the drug-smuggling charges he faced.

The car faced issues on the production line. The U.S. was in a recession that caused poor sales at first. So, DeLorean thought the natural thing to do was agree to smuggle $24 million worth of cocaine to keep DeLorean Motor Company in business. DeLorean was busted by the FBI after being filmed crowing that cocaine was "better than gold" and toasting the cash injection his company was getting from the drug dealers.

John DeLorean was born January 6, 1925 in "motor city," Detroit.  He was the oldest of four sons to Zachary and Kathryn DeLorean. His dad worked for Ford and was a violent alcoholic. The DeLoreans divorced in 1942 when John was 17. DeLorean was a good student and earned a scholarship to the Lawrence Institute of Technology. He served in the Army for three years during World War II. After finishing college, DeLorean started his career in the automotive industry at Chrysler before moving to General Motors' Pontiac division. It was 1956 and he was the assistant to the chief engineer. 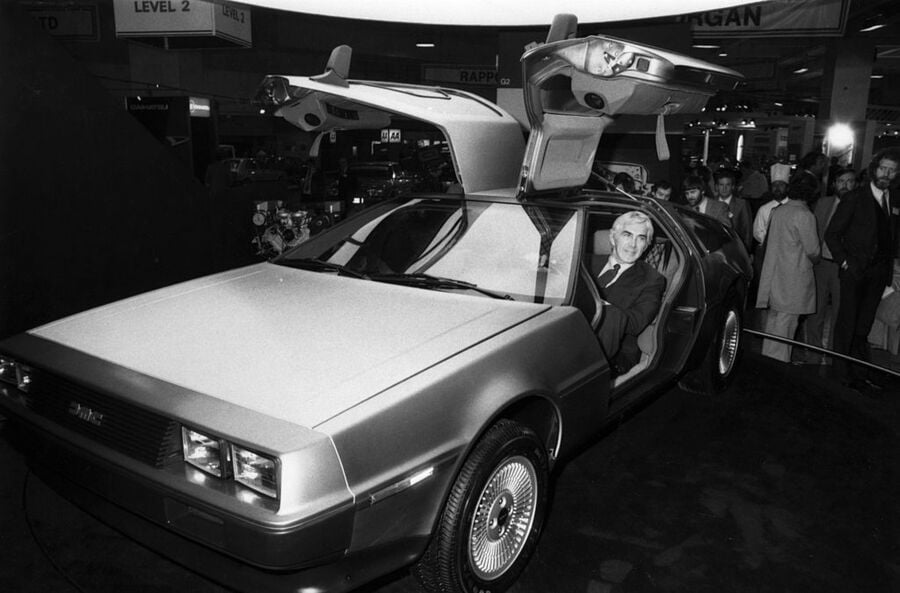 DeLorean was credited with designing the first "muscle car" when he put a huge engine in an existing Pontiac and rebranded it as GTO. It was an enormous success and he became the youngest division head at 40. He began hanging out with celebrities like Sammy Davis Jr. He got a chin implant to look more masculine. He divorced his wife of 15 years. He cultivated his celebrity and notoriety. He dated actresses Candice Bergen and Ursula Andress, singer Joey Heatherton, and Frank Sinatra's daughter Tina. He was a lothario who explained his womanizing ways by saying: "I've got a reasonably strong sex drive, no man who ever accomplished something didn't have that characteristic."

He married model Kelly Harmon in 1969, when she was 19 and he was 44. Their age difference was so scandalous that GM made her older in the press release sent to GM's employees. By 1972 that marriage was over and DeLorean was head of GM's North American car and truck business. During the year he was single, he adopted a baby boy that he named Zachary.  In 1973 he met and married Cristina Ferrare, a world famous model. The newlyweds moved into a mansion on 434 acres in New Jersey. Four years later, they had a baby girl named Kathryn.

His professional life took a hit when an unedited speech in which he said GM lacked quality was leaked to the press. He was fired. He didn't miss a beat. He founded the DeLorean Motor Company.

He poached engineer Bill Collins from GM to help design a moderately priced two-seater car, the DeLorean DMC-12. It took three years to build the prototype, which DeLorean called "our version of the American dream." He unveiled his creation at a car show and when investors got a look at the sleek, space-ship looking car, they couldn't wait to sign on. Bank of America and celebrity endorsers ended up parting with the equivalent of $72 million in today's dollars.

DeLorean accepted a 100 million pound bid from the Labor government to produce 30,0000 DMC-12s in Dunmurry, Northern Ireland. Unemployment there in the late 1970s was more than 30%. DeLorean choosing to build his cars there was a life raft for the community. Not long after, Lotus founder Colin Chapman brought his experience producing sports cars to the DeLorean Motor Company.

During the production of the initial DMC-12s is when DeLorean and Chapman decided to embezzle the $72 million loaned to them by investors for their own use. DeLorean was later acquitted of fraud during a 1985 trial in the U.S. America was deep in a recession and DeLorean Motor Company could not keep making cars. In the end 9,000 DMC-12s were made and 6,000 were sold. Today, the car sells for more than $51,000.

While DeLorean was trying to keep his car company afloat, a drug dealer who was really an undercover DEA informant, offered DeLorean millions if he agreed to smuggle 220lbs of cocaine, which back then had a street value of $24 million, into the U.S. Because Hoffman was a DEA informant, all of his meetings with DeLorean were recorded and the FBI arrested John DeLorean in a sting in Los Angeles in 1982. His arrest led to the liquidation of the DeLorean Motor Company. Two years later, the car exec was found not guilty when his attorneys successfully argued that DeLorean had been the victim of entrapment by the police.

His wife Cristina left him a few days after he was acquitted. DeLorean later admitted that pride had been his downfall, saying: "I had an arrogance that was beyond that of any other human being alive."

Multiple attempts to resurrect his business failed. DeLorean married a fourth time, had a third child, and became a born-again Christian. He died in 2005 at 80. He was living in a one bedroom apartment in New Jersey.