By Amy Lamare on August 30, 2018 in Articles › Entertainment

He's feuded with everyone from Kat Von D to Kylie Jenner and presides over a makeup empire worth $100 million. Jeffree Star is an androgynous YouTube sensation. He gave another YouTube star, Shane Dawson, full access to his life for a YouTube documentary series that is captivating the internet. The 32-year-old beauty influencer invited Shane to spend a day in his life. The Secret World Of Jeffree Star gives audiences an all access peek into Star's home, wardrobe, and boyfriend. It has more than 75 million views so far.

Jeffree Star was born Jeffrey Lynn Steininger on November 15, 1985 in Orange County, California. His mother was a model. His father committed suicide when Jeffree was six years old. Star was largely raised by his grandparents in Huntington Beach, California while his mom was working. He started experimenting with makeup in high school and quickly became enamored with it. He calls his look back "very goth and crazy," with spiky pink hair. He was open about his sexuality. He moved to Los Angeles after high school and worked as a model and makeup artist at a MAC store to make ends meet.

Long before YouTube came along, Jeffree was a MySpace sensation. He joined the site in 2003 and used it to promote his aspiring music career. However, he quickly got a huge amount of interest and followers for his appearance and attitude rather than his music. By 2006, Star was the most followed person on MySpace. He released his first and only album Beauty Killer in 2009. His song Lollipop Luxury featured Nicki Minaj. In 2010 he signed to Akon's record label. Akon called Star the next Lady Gaga. He planned to release a second album, but never did. He left the music industry in 2013 under mysterious circumstances. 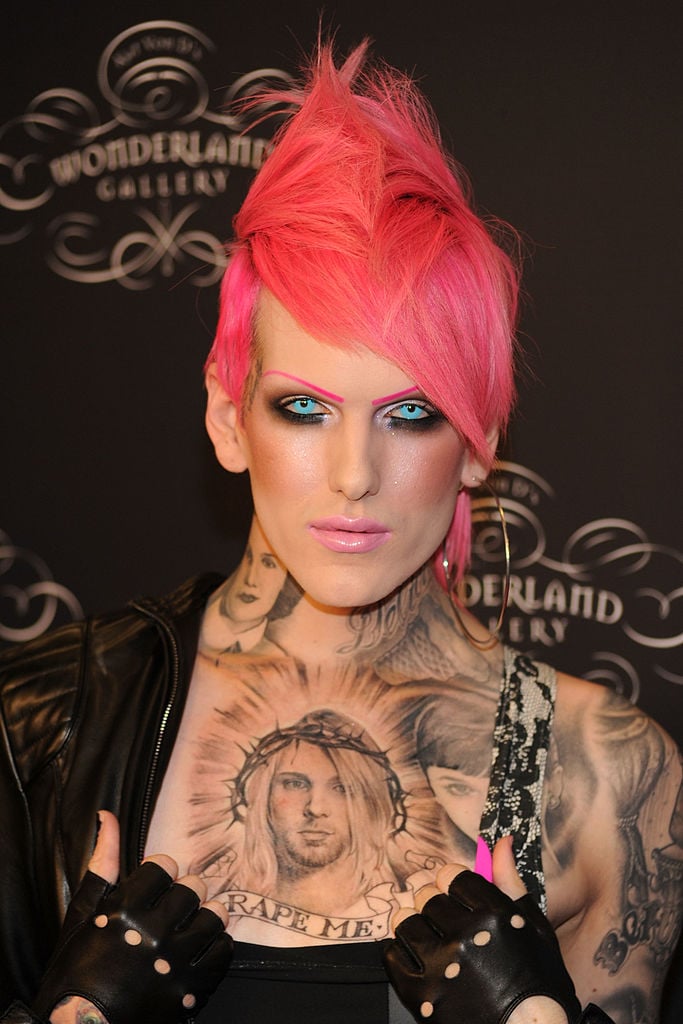 Jeffree has been embroiled in a number of feuds and scandals. The most significant feud was with his friend of a decade, Kat Von D. A few years ago, Kat claimed publicly that Jeffree stole artwork for his makeup brand from a mutual friend of theirs. Jeffree denied the allegations, but Kat's public outburst ended their friendship. The most significant scandal Jeffree has been involved in involved is a video that Star seems to have intended as comedy in which he talked about throwing battery acid on an African American girl's face to lighten her skin so that her foundation matches. Last year, Star made a video apologizing for his racism in the past and claiming he has grown in the decade since the worst of the videos were posted.

He launched Jeffree Star cosmetics in 2014 with his life savings. A few minutes after his e-commerce shop went live with one product, a lipstick, every single item sold out. He reinvested the money he earned into his company and released three more shades of lipstick. In late 2015, Star began promoting his brand on YouTube, where, as of 2018, he has over a billion views.  Today, he has a huge following on YouTube (nearly 10 million subscribers), Twitter (2.3 million followers), and Instagram (7.5 million followers). He shares makeup tutorials and product reviews across his social media channels. Jeffree earns about $4,500 a day from his YouTube channel alone. That's $1.7 million a year! But that's pennies compared to Star's other business…

Jeffree's eponymous makeup line started with liquid lipsticks and now sells eye shadows, highlighter palettes, lip products, clothing, and accessories. He brings in money from his cosmetics, touring, and deals with brands such as Morphe makeup brushes. But it's the makeup line that is the real gold mine.

When Jeffree appeared on an episode of Shane Dawson's YouTube influencer interview show, he gave a tour of the sprawling office space that is home to Jeffree Star Cosmetics. But more impressively, when asked directly how much revenue the company produces each year, Jeffree reported it's over $100 million. As of this writing, we estimate his net worth to be $50 million, but, like his makeup empire, that number is growing quickly! Not bad for a former MySpace star!

Jeffree has been dating Nathan Schwandt since 2015. Before meeting Star, Nathan worked at a pet store in Michigan. He sent Star a DM on Instagram in 2015 and the rest is history!

The couple lives together in a $3.6 million home in Calabasas—they are the Kardashian-Jenner family's neighbors! They have five Pomeranian dogs named Diamond, Diva, Daddy, Delicious, and Drama. Jeffree and Nathan have been together since before Jeffree was famous. They met when he first started promoting his brand, long before he even got on YouTube. Jeffree is the first man Nathan has ever been with.

Keep your eye on Jeffree Star. He could give Kylie Jenner a run for her makeup empire money!