The Best Fantasy Football Bargains Based On Actual Salaries

In most cases there is usually a pretty clear difference between real life and the fantasy world. However, with fantasy football those lines can get quite blurred. More often than not, a player with a great fantasy season is also very helpful to their real life team. And they're even more helpful if their contract barely registers on their team's salary cap. Subsequently, we thought it would be interesting to see how the best bargains in the NFL stack up in the fantasy world (note: all point totals are based off standard ESPN scoring). If you haven't drafted your fantasy team yet, maybe some of these guys listed below are worth a closer look. And on that note, the girls in the photo below are DEFINITELY worth a closer look: 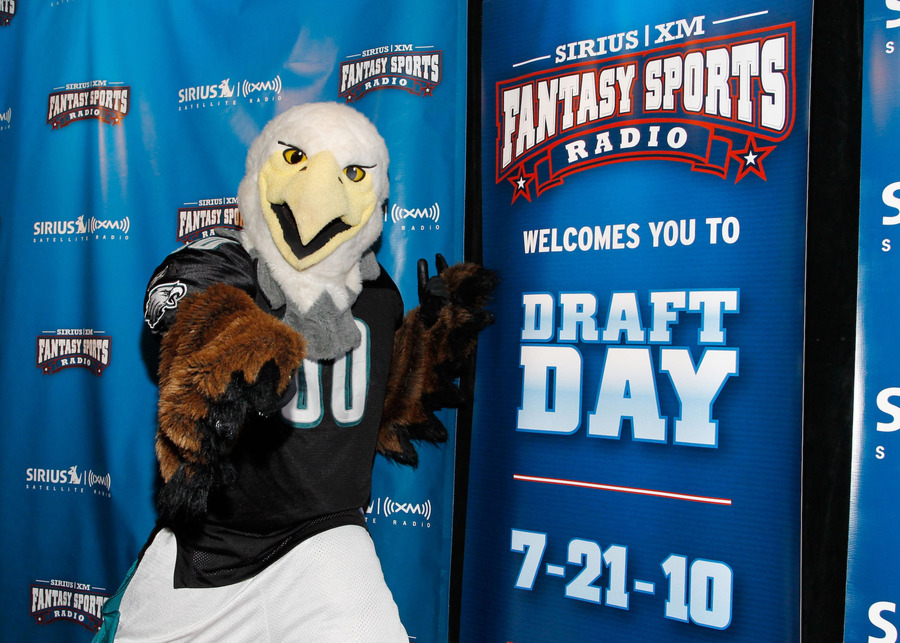 Morris burst onto the scene last year, amassing 28 carries in Week 1 and never looking back. Keep in mind this was a Mike Shanahan-led offense, where a running back's job is about as secure as a Kardashian marriage. Morris finished the season 5th in scoring among running backs, and looks to be in prime position to repeat his stellar performance this year. With his incredibly cheap contract—he's only due to make about $600,000 the year after next—he's one of the most underpaid players in the NFL, relative to performance. The man averages a point for every $2,220 spent on him, and each touchdown only costs the 'skins $47,000.

The Patriots weren't shy about passing the ball a ton last year, and Ridley still ended up with 1263 yards and 12 scores. Each yard he gained cost the Pats just $667. And with New England swearing to use the run more often this year, Ridley's 2013 might be even more cost-effective. The only downside? He had just six catches last year. But with half of New England's receiving corps being injured, in jail or Tim Tebow, Ridley's got a great shot to do something special.

Consider this: the Jaguars might have had one of the worst quarterback situations of the 2000s last year, and Shorts still nearly reached 1,000 yards receiving, on only 55 catches. With his smaller frame, injuries are always a concern (he had some concussion problems at the end of 2012), but if the Jags can find any sort of a competent signal caller this year, Shorts could easily end up as a Top-15 guy. As it is, he's only costing $744 per yard, and should continue to improve.

Hilton was a bit of boom or bust last year: he had two games with goose eggs, never caught more than six passes in any contest, yet still had five games with 100+ yards receiving. He was a bargain, though, with each of his seven touchdowns costing a shade over $88,000. Now, with a year under his belt, the consistency should be there…well, consistently, and he's primed for a breakout year at a significantly reduced cost. His given name is Eugene—no one's publicly come out and said what the T.Y. stands for, but it might as well be "Thank You," which is what you'll say to the other owners when he falls to you in a mid to late round. 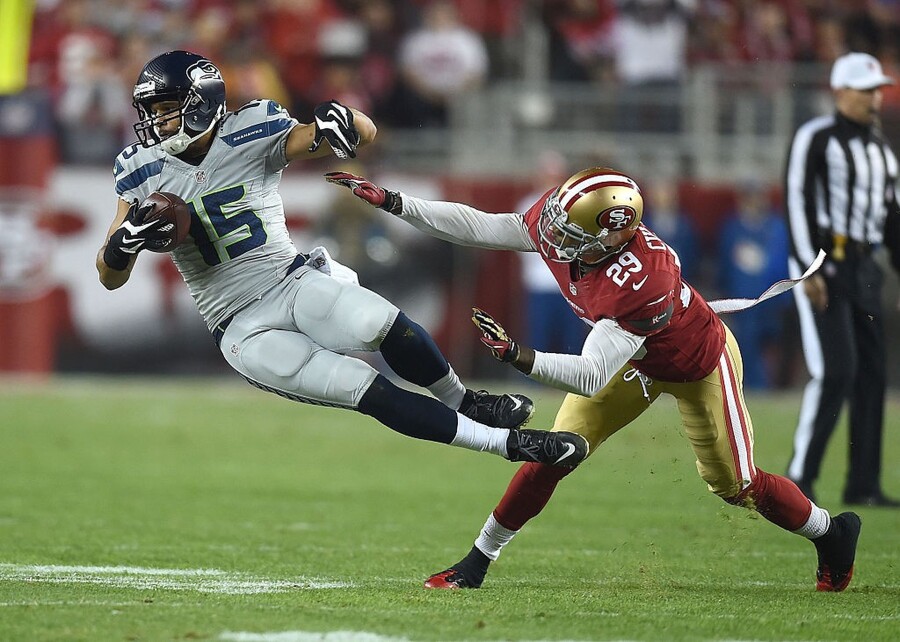 Kaepernick's point total doesn't seem too impressive at first glance; he ranked 25th out of all quarterbacks, just ahead of Brandon Weeden and behind the likes of Ryan Tannehill, Christian Ponder and Philip Rivers. But then you remember that he was only a starter for seven games, and it's nearly criminal how little the 49ers are paying him. Take his stats from last year and extrapolate them over an entire season, and suddenly Kap is right around 4,000 yards passing, another 1,000 rushing, and 30 total TDs. Whether he's able to keep that up this year remains to be seen, but the smart bet is on yes.

Graham had an "off" year last year, accumulating only 85 catches for 982 yards and 9 TDs. Consider that he only played 14 games, and that $1.5 mil contract is even more of a bargain. Look at it another way: barring injury, Graham will almost certainly be the top-performing tight end in 2013, both in fantasy and real life. And he's not even paid like a Top 15 one. Couple that with being a contract year, and do not be surprised when Graham puts up a monster season. Not too shabby for someone who didn't play organized football until his senior year of college.

This one is more of a guess than anything. But the "elite TE" class begins and ends with Graham, so you might as well wait on a tight end if you don't get him. Yes, Housler only averaged a little over 2 points a game last year, but he also had maybe the most anemic quarterback crew in the history of the NFL. While Arizona's offensive line should give cause for concern, the Cardinals made a tremendous upgrade (at least fantasy-wise) with Carson Palmer, who's coming over from the Raiders. In 2012, Brandon Myers was Palmer's tight end, and Myers had 105 targets. Obviously Larry Fitzgerald will be the go-to guy in Arizona, but Palmer loves finding his tight ends in the middle of the field, and Housler clearly has the ability to catch the ball. He snagged 45 last year; that number could rise at least 50% this year. If he can finally find the endzone, too—a feat he has yet to accomplish in his NFL career? Well, you'll be one happy fantasy owner with a late-round steal.

Coming into the 2012 season, Wilson was probably fairly compensated. After all, he started out as the backup to Matt Flynn, who's now a member of the Oakland Raiders. A year later, off an 11-win season (that was aided by that controversial Monday Night Football finish) that included a first-round playoff win and a solid performance in a divisional round loss, people are expecting big things for Wilson and the Seahawks. His $22,702 cost per touchdown was the lowest in the NFL, and he rushed for nearly 500 yards, too. Consider that a bonus—you know his agent will when contract negotiations come around. 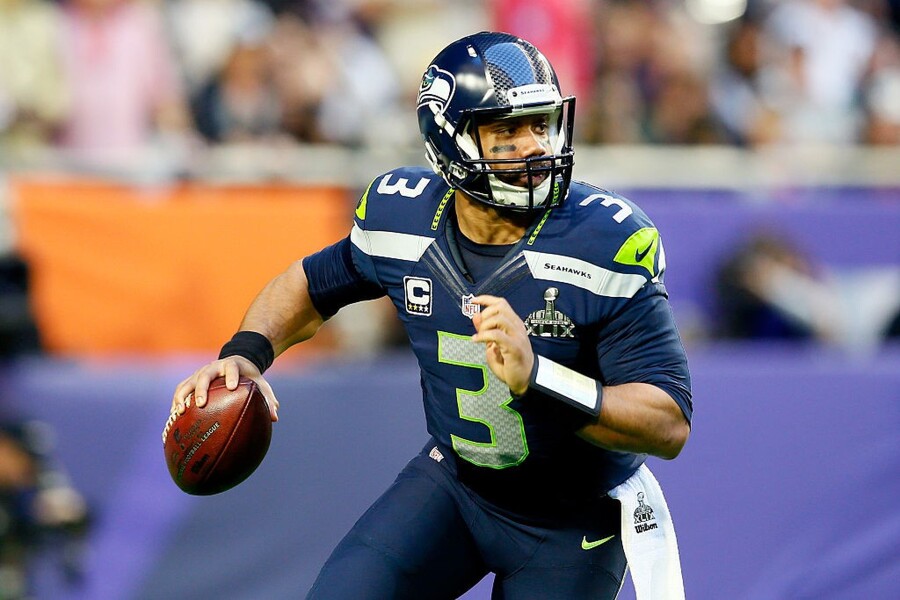 Russell Wilson Salary / Kevin C. Cox/Getty Images
Did we make a mistake?
Submit a correction suggestion and help us fix it!
Submit a Correction