By Brian Warner on July 7, 2017 in Articles › Entertainment

On May 30th, 2006, George W. Bush nominated Henry Paulson to succeed John Snow as the 74th Secretary of the Treasury for the United States. The nomination alone was quite an honor for Paulson, but there were two catches: First, Paulson had to step down from his position as CEO of Goldman Sachs and be confirmed by the United States Senate. Next, assuming he was confirmed, Paulson would be required by law to liquidate his entire portfolio of stocks prior to officially taking office. For the average person, this second catch probably wouldn't be a huge deal. For Henry Paulson however, that meant he would be forced to sell off his entire 1% stake in Goldman Sachs in the middle of one of the hottest stock market rallies in recent history. He also would have to be willing to take a paycut from $40 million per year to around $183 thousand. Why on earth would he agree to do all this?

Before becoming Treasury Secretary, Henry Paulson spent 32 years climbing the ranks of Goldman Sachs. He joined the bank's Chicago office in 1974, where he analyzed large mid western companies. He made partner eight years later, at the age of 36. Between 1983 and 1988 he steadily rose to the point where he was managing director of the entire Chicago operation. Next he made the jump to the company's world headquarters in New York City. Henry served as Chief Operating Officer for four years before being named Chairman and CEO.

While serving as CEO, Paulson's annual salary typically ranged from a low of $16 million to an all time high of $40 million. He was also given extremely generous stock option grants every year. As Treasury Secretary, Henry would be entitled to an annual salary of $183,500 and obviously the US government doesn't offer stock options. So, why on earth would someone be willing to take such a massive cut in salary and perks? Especially one that required you to liquidate your entire stock portfolio in the middle of one of the hottest market rallies of the last 20 years? 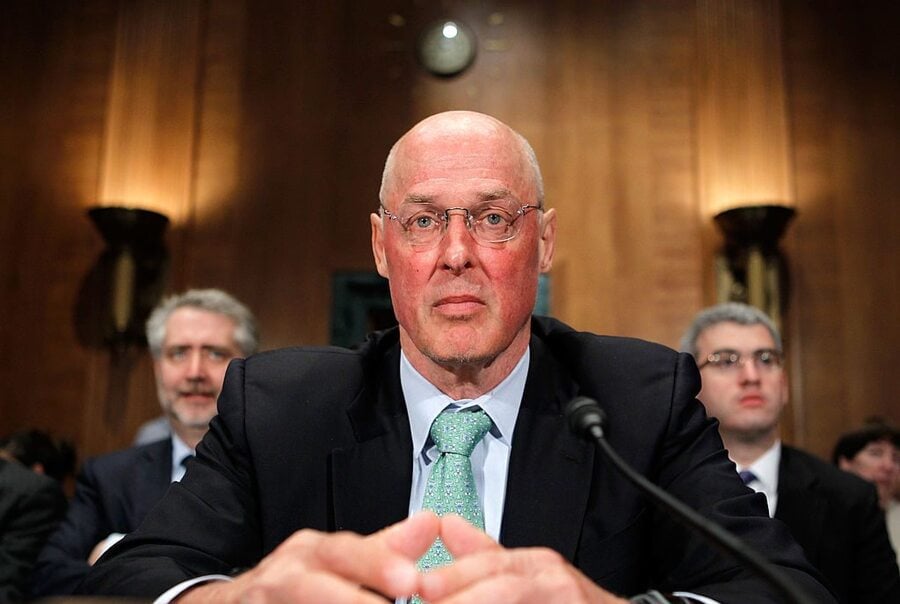 The US government requires a handful its most senior leaders to liquidate all of their stock holdings prior to taking office in order to remove any potential conflicts of interest. We can't have the President or the Treasury Secretary or the Secretary of State help certain industries because he or she stands to make a huge personal gain from a policy decision. Anyone who falls into this category must liquidate their holdings and place them into a blind trust while they serve in office. To soften that blow, the US Government has created a very special tax loophole…

In 1989, the government created a one-time loophole for a handful of high level positions that would help attract highly talented professionals away from the private sector. This loophole gives the candidate the ability to liquidate his or her entire portfolio without paying a dime in capital gains taxes. For someone like Henry Paulson, whose entire $500 million portfolio would have otherwise been subject to full taxation, that represented a very attractive opportunity. This is the only reason someone would agree to forfeit a glamorous $40 million a year job in order to make $183,000. Past public servants who took the government up on this loophole include Donald Rumsfeld and Colin Powell. The loophole only applies for people in the Executive Branch. That means President, Vice President and cabinet Secretaries. Senators and congressman do not qualify. Candidates either need to apply to qualify with the I.R.S. after the fact, or Congress will require the liquidation in advance for certain people and postions. Clearly Henry Paulson's ownership of 1% of the world's largest investment bank would represent a clear conflict of interest as Secretary of Treasury, so qualification was a no-brainer.

In July 2006, Henry Paulson liquidated 3.23 million shares of Goldman, roughly 1% of the entire company, in a one time public sale. Goldman's $152 share price left Paulson with a tax free gain of $491 million. Let that sink in. $491 million free an clear. Without this loophole, had Henry sold his shares at the exact same price and time, he would have been liable for more than $200 million worth of state and Federal capital gains taxes.

This obviously sounds amazing in hindsight, but there was definitely a time where Paulson deeply regretted selling his shares and becoming Treasury Secretary. In the year and a half directly after becoming Treasury Secretary, the stock market (and Goldman Sachs in particular) went on an massive tear. Between his first day in office, July 10, 2006 and October 26, 2007, the share price of Goldman rose from $152 to $236. Had Henry stayed CEO, not only would he have continued to earn $40+ million per year in salary, his 1% stake in the company would have become worth $755 million! In reality $755 million after taxes would still have been less than the $500 million he was sitting on, but it still did not feel good at the time. Who knew how much higher Goldman was going to climb? Could his stake had grown to be worth $1 billion? $2 billion? More?

In retrospect, Paulson's timing was accidentally amazing. Sure there was a brief period where Goldman shares soared, but within a year the entire financial industry had collapsed and the world economy entered the biggest downturn since the Great Depression. Goldman shares peaked in October 2007 at $236. Just thirteen months later, after the collapse of Lehman Brothers and Bear Stearns, Goldman shares slid 77.5% to an all time low of $53.31. Had Henry stayed CEO through that entire roller coaster ride, his 1% stake would be worth just $170 million, roughly $100 million after taxes. And had Paulson stayed at Goldman, it's very unlikely he would have ever sold any of his shares. It is highly probable that his 1% stake would have grown from $500 million to nearly $800 million before watching it tailspin to $170 million. Depending on how you look at it, Henry Paulson saved anywhere between $200 and $400 million by becoming Secretary of Treasury. Not bad for a government job!