The 10 Most Expensive Toys In The World

If you shopped for any children over the holidays, you know how expensive toys can be. While toys like basic Barbie dolls and Mr. Potato Heads won't typically break your bank, there are some toys that can be very expensive, due to their exclusivity. Hopefully your kids or relatives didn't ask for any of the toys on this list, because all of these cost more money than the average person will make in a whole year!

German stuffed animal company Steiff decided to make a limited run of only 41 of these bears, which include sapphire eyes and golden mouths. The company claims to have invented the modern teddy bear and made these for the creation's 125th birthday. The most expensive one sold for $195 thousand at auction.

Titania's Palace is the ultimate dollhouse and includes 3,000 pieces and 18 rooms. It took Sir Nevile Wilkinson 15 years to build it for his daughter, who wanted a house for "the fairies in the garden". This palace was purchased for $256,500 and is on display in the Castle of Denmark.

This fancy Barbie was created by Australian designer Stefano Canturi and is outfitted in a black strapless dress and a choker with a one-carat square-cut pink diamond.  This Barbie sold for $302,500 which shattered the previous record for a Barbie doll which was just about $17 thousand.

If you thought the regular Wii was expensive when it came out, this special edition comes with 2,500 grams of 22-carat gold as well as three diamond studded buttons. This Wii has a total of 78 diamonds and only three of them were made. It comes with a price tag of $487 thousand.

This 24-carat gold rocking horse was created by jeweler Ginza Tanaka to celebrate the birth of Japan's only prince.  The horse weighs 80 pounds and a version of this toy was purchased by Jay-Z and Beyoncé for $600 thousand. 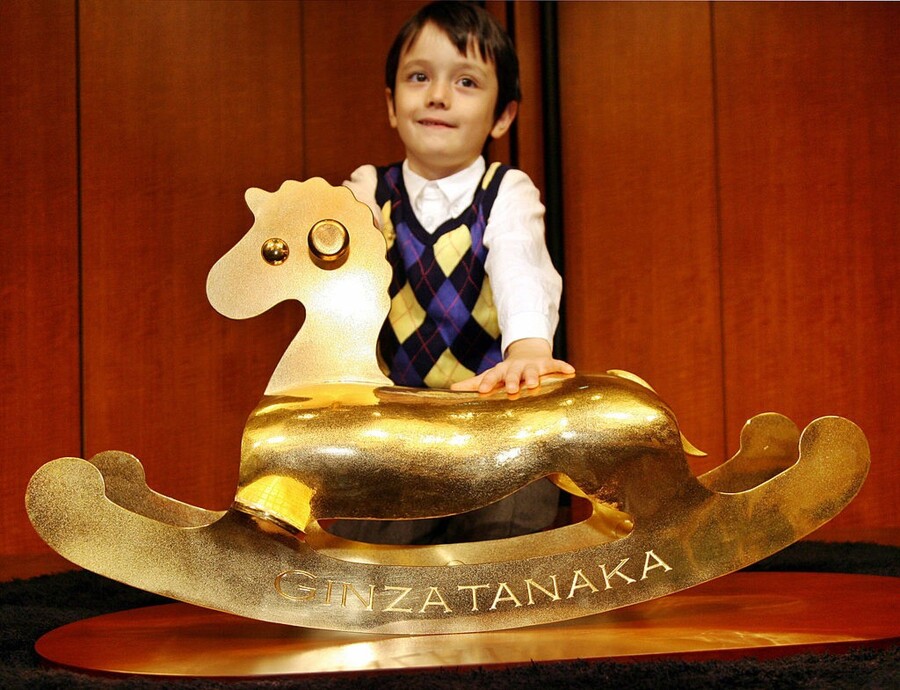 If you don't know how to solve a Rubik's Cube you might want to buy this one to leave on the shelf and admire. This version is made with 18-carat gold and each side of it features 185 carats of precious gems. This special edition was made in 1995 by Diamond Cutters International and is said to be worth $1.5 million.

Steiff shows up again on this list with their teddy bear that wears a Louis Vuitton coat and hat. This bear sold for $2.1 million and was purchased by Jessie Kim from Korea. You can visit this well dressed toy at the Teddy Bear Museum.

This very shiny soccer ball is made up of 6,620 white diamonds, 3,500 African diamonds, and 2,640 black diamonds. It was commissioned to celebrate the 2010 World Cup in South Africa and is said to be worth $2.6 million.

If you can't afford an actual Lamborghini you might want to opt for a model car instead. The only problem is that this particular model goes for a ridiculous $4.8 million, which is about 12 times as much as the actual car would set you back! This model is made at a 1:8 scale and features gold and platinum rims as well as diamonds in the seats, headlights, and steering wheel.

This doll was created by designer Madame Alexander and is dressed to the nines with clothes by Christian Dior, fur by Oscar de la Renta, and accessories by Katherine Baumann. This doll also sports nine carats of diamonds and Swarovski crystals. Only five of these were made, with a price tag of $5 million each!