The 10 Largest Economies in the World

By Amy Lamare on August 22, 2013 in Articles › Entertainment

Even though China has grown at an absolutely furious pace for over the last decade, as of 2013, in terms of gross domestic product (GDP), The United States is the largest economy in the world by far. China trails the US at No. 2, and is widely acknowledged to be on track to take over as the world's largest economy by 2023, though they still have a ways to go in terms of GDP to oust the US from the top spot.

Why do economists think China will overtake the US as the world's largest economy? It's simple — Asian industrialization has been outpacing Western economies for years, and is expected to continue to do so over the next several decades. Consider the simple fact that the average worker in China works 2,307 hours per year while the average American worker puts in 1,790 hours per year.

Once China achieves the top spot in world economies, it cannot rest on its laurels. Major economists predict that India will take over China for the top position by 2048. Once again Asian industrialization will continue to grow by leaps and bounds, while Western cultures begin to slip further behind. How can the US maintain its position at the top? Work longer hours and take fewer holidays! (Yay?)

Of course this is all just speculation at this point based on recent worldwide trends. The U.S. and Europe can turn things around if they pick up their pace, change their policies, and stop outsourcing work to China and India. Let's take a look at the 10 Largest Economies in the World according to each country's GDP. 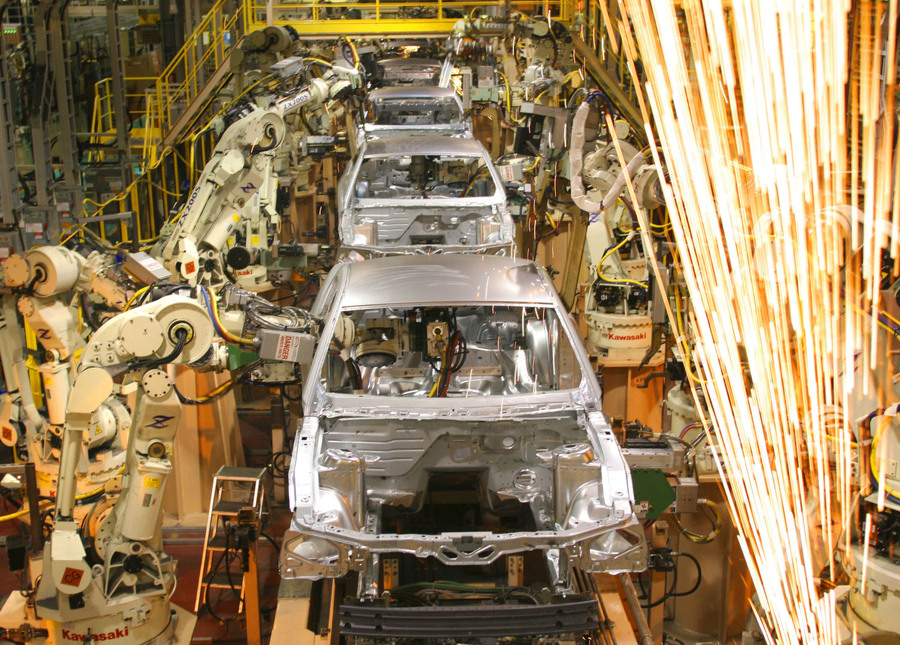 India's booming economy is on the rise, with an average growth rate of 7% annually since 1997. India's major industries are agriculture, and services –especially in information technology and the outsourcing of business from other countries.

Italy's very diversified economy relies on its industrial sectors for his high per capita GDP. Italy also benefits from membership in several groups of the wealthiest economoies, including the Group of Eight (G8) and European Union (EU).

After the fall of the Soviet Union, Russia made big changes to its economy. It privatized most of its industries and made the economy more globally integrated and market-oriented. These reforms have led, in part, to Russia's rise on the list of largest economies. Of course the fact that they are the leading oil producer in the world doesn't hurt.

The UK comes in at No. 7 in largest economies due to their healthy agriculture, electronics and manufacturing industries. England has long been considered a leading financial and political power in Europe.

Brazil is South America's largest economy due to the country's strength in agriculture, mining, manufacturing, and service. Brazil is also the second biggest economy in the western hemisphere.

France has long been one of the most developed and wealthiest economies in the world, and this year clocks in at 5th. More than 30 of the world's 500 biggest companies are French and the country is considered one of the best places to locate the headquarters of Fortune Global 500 companies.

Germany has Europe's largest national economy, and is considered to be the second largest exporter in the world. Germany's economic strengths lie in automotive, electric equipment. Pharmaceuticals, and computers, among others

Japan has long been regarded as one of the most technologically advanced economies in the world with its major contributions in the industrial and electronic sectors. Japan also benefits from robust business in automotive, semiconductors, and processed foods, among other industries. While Japan's agricultural industry is fairly small, it is the most profitable in the world.

China's shift to a market-oriented economy has buoyed its growth and rise to one of the largest economies in the world. China is the fastest growing economy with average annual growth rates of 10%. The Chinese are the largest exporters in the world. If China stays on pace and current trends in other economies continue, China will overtake the US as the world's top economy in a decade, if not a few years sooner.

The US's major industries include petroleum, mining, food processing, aerospace, and information technology. The U.S. is also considered to be the most influential and largest financial markets in the world. The US's economic growth rate is 2.2% annually.