By Amy Lamare on January 27, 2021 in Articles › Entertainment

Sales of luxury real estate fell off in 2020 thanks, to the Covid-19 pandemic. New York City took the biggest hit, with sales of luxury homes – which are those in the top 10% of real estate sales – down 46.7% in the third quarter, compared to 2019. An early Covid hot spot, many wealthy New York City residents fled the city. Other markets such as Palm Beach, Los Angeles, the Hamptons, and Greenwich, Connecticut thrived in comparison. With the shutdown of things like offices, schools, and gyms, some wealthy people wanted to move into larger homes with more space for work from home, do homeschooling, and home gym setups. In Los Angeles, high-end home sales were up by 87.5%. In Palm Beach, high-end home sales were up 33.5%. In Greenwich, high-end home sales were up 68.2%, which ended a 10-year long slump in Connecticut's third most affluent city.

Of the top 10 real estate deals closed in 2020 in the U.S., two were more than $100 million and both of those home sales were in Los Angeles. Overall, L.A. has five of the top 10 sales, two were in the Hamptons, one was in Manhattan, and one was in Palm Beach, Florida. 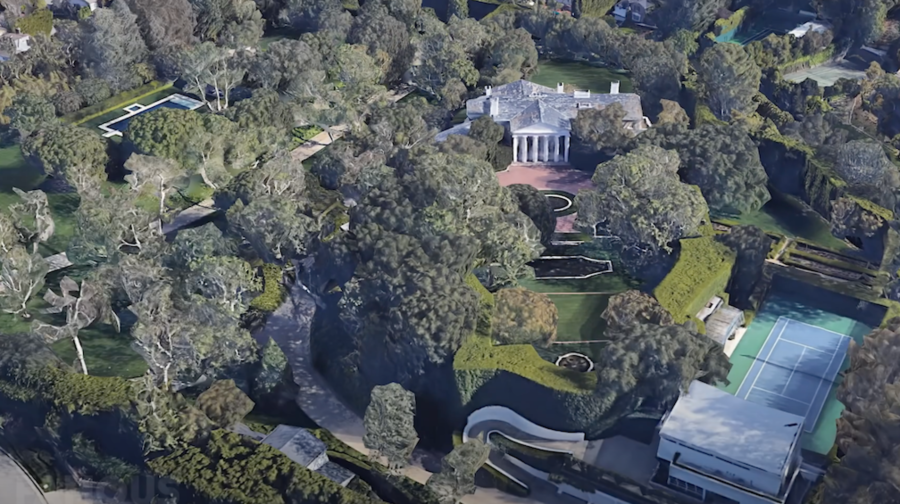 The 10th highest priced real estate deal of 2020 is a 3.4-acre oceanfront estate with an 8,000 square foot mansion. The property also has a waterfront swimming pool and a 6,000 square-foot guesthouse with its own pool. The estate was previously owned by the late former Morgan Stanley executive Charles Phillips and his wife Candace.

David Geffen purchased a recently built Beverly Hills home from entertainment and sports executive Casey Wasserman in June. The property was originally put on the market for $125 million. The 18,548-square-foot home sits on three acres with an 85-foot infinity pool, pool, house, gym, screening room, art studio, four-car garage, and a motor court with room to park 25 cars. Wasserman finished the estate in 2016. It sits on the land of his grandparents, the late Edie and Lew Wasserman, former home as well as the lot next door which was a home formerly owned by Frank Sinatra.

The mansion formerly owned by the Kennedy family, which President John F. Kennedy used as a winter retreat, sold in June to a real estate developer who plans to undertake a massive renovation on the property. New York real estate billionaire Jane Goldman sold the property, which she bought for $31 million in 2015. Joseph P. Kennedy bought the property in the 1930s. The Kennedy family sold the 15,000-square-foot Mediterranean-style home in the 1990s. The estate is located on chic North Ocean Boulevard.

This 2-acre lakefront estate on Palm Beach's S. Lake Trail sold in June by financier and energy entrepreneur Robb E Turner and his wife Lydia. The couple bought the home a bit more than three years ago for $27 million.

In January, a limited liability company tied to the family of Taiwanese billionaire Terry Gou bought two neighboring properties in the Trousdale Estates neighborhood of Los Angeles. If Guo chooses to combine the properties, it would be one of the largest private compounds in the Hollywood Hills. The first home has six bedrooms in the 17,000-square-foot home. The second home was built by Vancouver Canucks owner Francesco Aquilini. The house is 16,000 square feet and has an infinity pool, roof deck, and golf simulator.

Real estate obsessed billionaire Ken Griffin closed this $84 million deal in March. The property was formerly owned by Calvin Klein. Griffin has been on a serious real estate buying spree over the last few years. The seven-acre modern style estate sits on tony Meadow Lane in Southampton. Klein had the home built after acquiring the property in 2003. Before Klein, the home was a fortress-style design called Dragon Head that was at one point owned by the DuPont family and by Andy Warhol muse Jane Holzer.

This 10-acre estate hit the market in 2017 for $180 million. It was lowered to $115 million in 2019 and sold in December 2020 for $88 million. The home is a 12,200-square-foot Italian Renaissance-style mansion with nine bedrooms. Located in the Holmby Hills neighborhood, the property has a swimming pool and tennis court. The home was formerly owned by Tony Curtis and Sonny and Cher.

This transaction was the third-priciest ever, completed in Manhattan. Located on Billionaire's Row, the deal closed in July, more than three years after the initial deal was signed. The Penthouse includes a smaller unit on a lower floor, which could be staff space, guest space, or an office. The four-bedroom penthouse has 9,800 square feet.

Jeffrey Katzenberg sold his home in August. He and his wife bought the property for $35 million in 2009. The buyer was WhatsApp founder Jan Koum. The 26,000-square-foot house sits on nearly seven acres. The home was sold in an off-market deal. Koum made Jeffrey and Marilyn Katzenberg an offer they couldn't refuse.

Jeff Bezos closed a deal in April to acquire the famous 1930s era Warner Estate, which was designed for the late president of Warner Brothers, Jack Warner. David Geffen was the seller in the deal. It was an off-market deal. Located in Benedict Canyon, the nine-acre property has its own nine-hole golf course, several guest houses, and a tennis court.