By Joseph Gibson on August 24, 2016 in Articles › Entertainment

In most parallel parking scenarios, the worst possible scenarios if something goes wrong are either: A) You lightly scratch someone's bumper, or B) You're unable to get out of the spot and have to wait for someone else to move. But a new member of the Bad Parallel Parking Hall of Fame somehow found an option C, as captured by a horrifying video now making the rounds online.

When I say "horrifying," I mean that this video will probably get your rankles up whether you're a car person with affection for an almost $300,000 Ferrari 458 Speciale like the one on the receiving end of this botched parallel parking fiasco, or whether you're just someone with moderate-to-severe parallel parking anxiety. Between those two groups, I figure that covers roughly 90 percent of the population, so get ready to be appalled:

The New York Daily News reports that no charges will be brought against the driver who somehow managed to lodge the rear of her Mercedes (complete with a couple of kids in the back seat) onto the Ferrari's hood, since no one was hurt and the damage is all reparable. That's not including the emotional damage to the driver's ego, especially since the whole thing went down outside of a weekly coffee shop meeting of classic car enthusiasts, which only served to exacerbate the chagrin felt by passers-by who witnessed the accident and its aftermath. In the video, the whole situation is summed up by the apparent owner of the Ferrari as well as anyone ever could:

"Are you serious? Are you f—–g serious? That's about the dumbest thing I've ever seen." 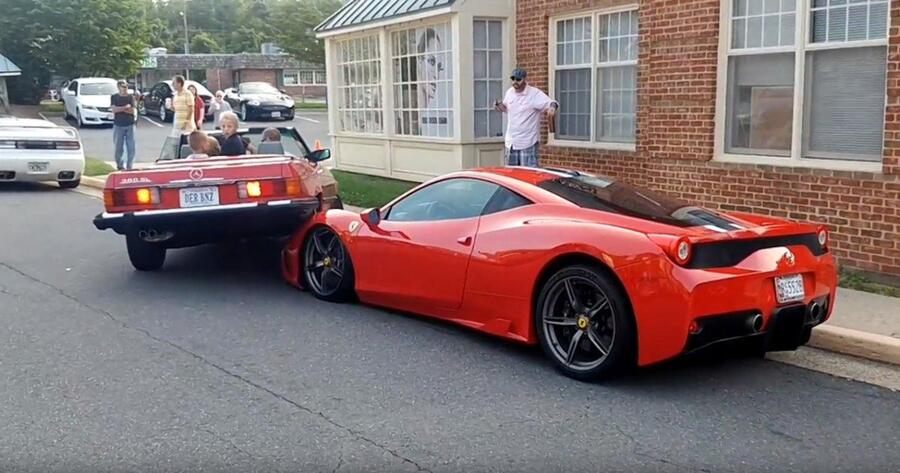 As for how such a thing could have happened, that appears to still be a mystery. But it's certainly something to ponder the next time you find yourself in a tricky parallel parking situation, or when you're parking a sports car with three hundred grand on the street.