Ten Facts You Might Have Not Known About Air Jordans

By Marvin Jules on August 4, 2015 in Articles › Entertainment

Ask almost anyone to provide you with the name of a sneaker, and more likely than not, the name that will come out of that person's mouth is the Air Jordan. The Air Jordan is arguably the most popular sneaker of all-time, and is one of the best-selling sneaker lines of all-time. Last year alone, the Air Jordan sold $2.6 BILLION worth of sneakers. To put that into perspective, adidas, Under Armour, Reebok, and every other non-Nike/Jordan shoe sold a cumulative amount of $190 million all of last year. It's safe to say that the Air Jordan is running the game. But there are some things about the popular sneaker line that you may not have known. Keep reading to find out.

Michael Jordan Initially Did Not Want To Sign With Nike

Back in 1984, after Michael Jordan decided to forgo his senior season at the University of North Carolina and declare for the NBA Draft, Mike was ready to sign a sneaker deal. Though he ended up signing with Nike, he actually wanted to sign with adidas; his favorite sneaker from his childhood. Adidas was unable to match the deal that Nike gave him, and the rest is history. 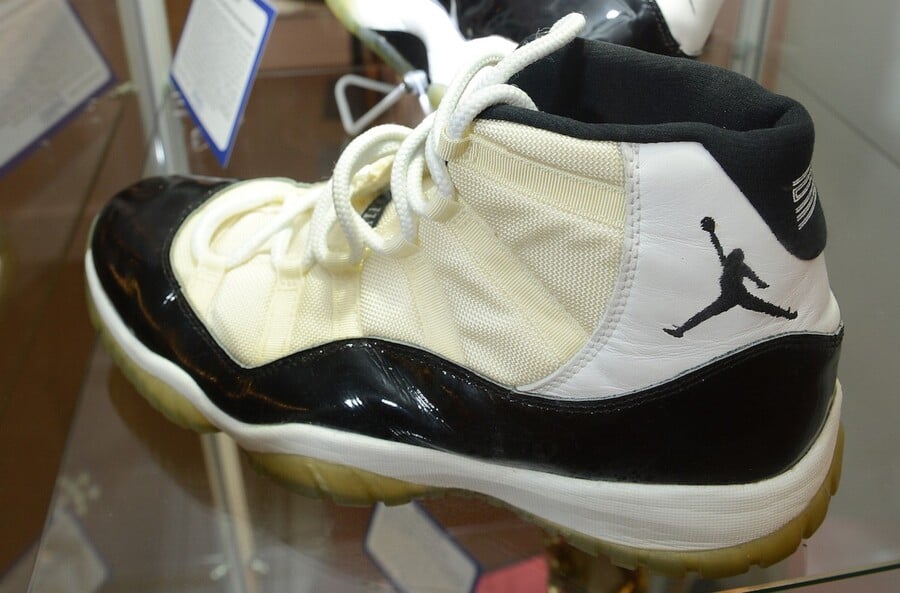 The Air Jordan I Was Banned By The NBA

The original Air Jordan was banned by the NBA because of their very strict dress code at the time. All sneakers worn by players had to have white in them. The Air Jordan Is were red and black. Everytime Jordan stepped onto the court with the sneakers, he was fined $5,000 by the league; but Nike ended up footing the bill. What resulted was a frenzy from fans, who couldn't wait to buy the sneaker when it released.

The Italian inspired Air Jordan II was designed by Peter Moore and Bruce Kilgore. The shoe was made with Italian leather and was the first Nike shoe to not feature the famous Swoosh logo. The shoe was not popular with MJ himself, for he only wore the shoe in 18 games, and allegedly threatened to leave Nike because he was so upset with the design.

When Peter Moore left Nike, the company enlisted Tinker Hatfield to take over the design duties for the Jordan line. Hatfield, who was an architect by trade, designed the Air Jordan III, which featured visible air bubble on the heals, tumbled leather, a faux elephant skin look, and, a brand new Jumpman logo. The logo was actually designed by Moore, but he never thought to use it as the primary logo. MJ loved the Air Jordan III, which helped convince him to stay at Nike. Hatfield went on to design every Jordan sneaker from the Air Jordan III up to the AJ XV.

When MJ retired from basketball for the first time in 1993, Nike wanted Tinker Hatfield to stop designing sneakers for the Air Jordan line. Hatfield didn't listen though. He had a hunch that the sneakers were bigger than just Mike himself, and that Jordan would likely be back. So he decided to go ahead and design the Air Jordan IX, which MJ never wore during a regular-season NBA game. What if Tinker had actually listened to the bosses at Nike?

Tinker Hatfield's Designs Were Inspired By Some Interesting Things

During the 1995 playoffs, Hatfield gave MJ a sample pair of AJ XIs to take a look at. Hatfield told MJ not to wear them. Jordan loved them so much, that he didn't listen to Hatfield. He debuted them on May 7, 1995 against the Orlando Magic. The sneaker went on sale a few months later.

Jordan Brand Was Formed in 1997

The Air Jordan XIIIs were released in 1997, and were the first Jordan shoe to not be branded as a Nike shoe. They were the first shoe released under the Jordan Brand, which became its own entity that year. Jordan Brand has since signed countless athletes to its brand, and grosses billions of dollars annually.

The Jordan XVII Was The First Sneaker To Retail For $200

The Jordan XVII came out in 2002, and the sneakers came with a metal briefcase and a CD-ROM. Still an outrageous price for sneakers at that time (even now).

Something Weird About Michael Jordan's Statue In Chicago

If you look at Michael Jordan's statue in front of the United Center in Chicago, you'll notice something weird when you look at the statue's feet. Jordan is wearing the Jordan IX; the only Jordan shoe that he never wore as a Chicago Bull.