By Amy Lamare on November 17, 2020 in Articles › Entertainment

If you've driven down Fairfax Avenue between Melrose and Beverly Boulevard in Los Angeles in the last few years, you've seen the long line of mostly young men outside the Supreme store. They line up for days before the popular brand drops a new shoe or sweatshirt or collection. It is an enormously popular brand with teens and 20 somethings. The company's distinctive red and white logo has become iconic. Basically, Supreme has a cult following. Now, news has broken that the company is being sold to the parent company of Vans and Timberland for about $2.1 billion, including debt.

Supreme was founded in 1994 in New York City by James Jebbia. He was born in New York City and grew up in the U.K. His mother was English and his father an American in the U.S. Air Force. Jebbia was a child actor in the U.K. in the late 1970s. He moved back to New York City at 19 in the early 1980s. He worked at a skate shop and clothing store called Parachute in the SoHo neighborhood of Manhattan. In 1989 he opened his first retail store, Union NYC, which carried mostly English brands. In 1991, he teamed up with Sean Stussy to found the Stussy fashion label. Like Supreme, Stussy was geared towards street and skater wear and became quite popular. However, Sean Stussy chose to retire in 1994, and Jebbia branched out on his own, to create the Supreme label. The brand is known for its skateboard culture t-shirts, sweatshirts, and hats of which they make a limited amount, to drive up the hype. Jebbia regularly commissions cutting-edge artists, like Jeff Koons and Damien Hirst to design their skateboards. They have made an effort to keep prices reasonable, by keeping production costs down. VF Corp, the parent company of Vans and Timberland is acquiring the company and its 12 stores from Jebbia and the private equity firms Carlyle Group and Goode Partners LLC. Jebbia and Supreme's senior executives will continue to manage the business after the acquisition. 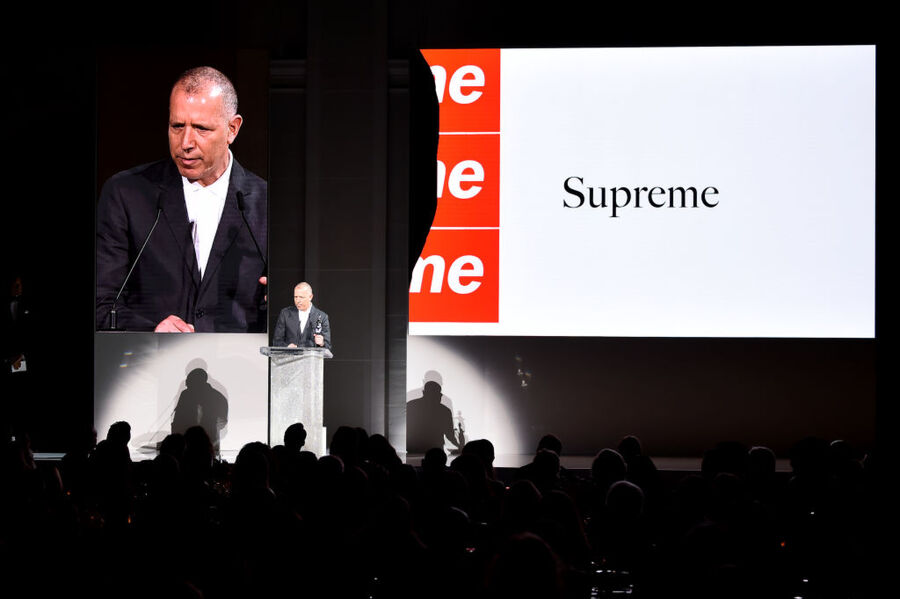 Fans of the brand are lamenting the sale to VF, even though Jebbia assured them that Supreme will stay true to its "unique culture and independence." With his background in skate culture through Stussy and Supreme, I'd take his word that Supreme will be a unique part of the VF empire.

Supreme's sales strategy is a bit different from traditional retail chains that try to sell as much product as possible. Supreme has built its reputation and cult following on word-of-mouth and limited release products. A Supreme t-shirt or hoodie typically sells out immediately. But no worries! You can find it on eBay shortly thereafter for $1,000 or more. More than 60% of Supreme's $500 million in revenue comes from online orders. The company has 12 brick and mortar stores in Los Angeles, San Francisco, New York City, London, and Japan. It has battled knockoffs. At one point, the company sued an Italian man who was selling t-shirts and hoodies with Supreme's logo. The company succeeded in shutting him down in Italy. Supreme owns trademarks for its logo in Europe and China as well as the United States.

Back in 2017, Supreme sold a 50% stake to Carlyle for $500 million, giving it a valuation of $1 billion. With the sale to VF, Carlyle made double its investment in Supreme.

Supreme could bring in $500 in revenue in 2022, according to VF. The deal is expected to close by the end of 2020. Jebbia could receive part of the purchase price in VF equity over time.