The Strange Life And Many Plastic Surgeries Of Jocelyn Wildenstein

By Amy Lamare on January 2, 2017 in Articles › Entertainment

Some drama went down at Trump Tower in New York City recently and it had nothing to do with the President-elect or his family. Socialite Jocelyn Wildenstein, 76, allegedly attacked her 49-year-old boyfriend at her Trump Tower apartment in New York City. She has been accused of cutting her boyfriend's face and chest with scissors and throwing hot wax at him during a violent rage.

Never heard of Wildenstein? Well, I'm sure you've seen her face. She has been famous for decades for having undergone so many plastic surgeries on her face that she bears no resemblance to the woman she once was.

Jocelyn was born in Lausanne, Switzerland in 1940. She grew up lower middle class. When she was 17-years-old she started dating the Swiss movie producer Ciryl Piguet and her life changed. She was introduced to the finer things, flew in a private jet, and moved to Paris with him at 19. In 1977, Jocelyn was introduced to billionaire art heir Alec Wildenstein by Saudi arms dealer Adnan Khashoggi on his 60,000-acre ranch in Kenya.

Jocelyn and Alec eloped a year later. Wildenstein started with a simple eye lift during the first year she was married. The couple became legendary for their spending. In the 1990s, they estimated that they spent $1 million a month on average.

By some accounts, Jocelyn and Alec were a weird, reclusive couple. They didn't participate in New York's society scene. Jocelyn managed the family's Ol Jogi ranch in Africa, their apartments in Paris and Lausanne, their French chateau, and their Caribbean home. They raised their two children and all was well, at least until the late 1990s.

During their marriage, Jocelyn underwent millions of dollars worth of plastic surgery to transform her features into a cat-like appearance. This was reportedly to please her husband's tastes. Before the cosmetic surgeries Jocelyn was a great beauty. But that was still that was not enough to please her husband. In 1997, Jocelyn caught him in bed with a teenaged Russian model. There was a gun involved in the altercation that ensued. No one was injured, but Alec was charged with menacing.

Jocelyn and Alec's divorce made them a household name. During the proceedings, which dragged on for two years, much of the attention was focused on Jocelyn's face. Sordid rumors that she'd once worked as a prostitute at the famous Paris bordello Madame Claude. 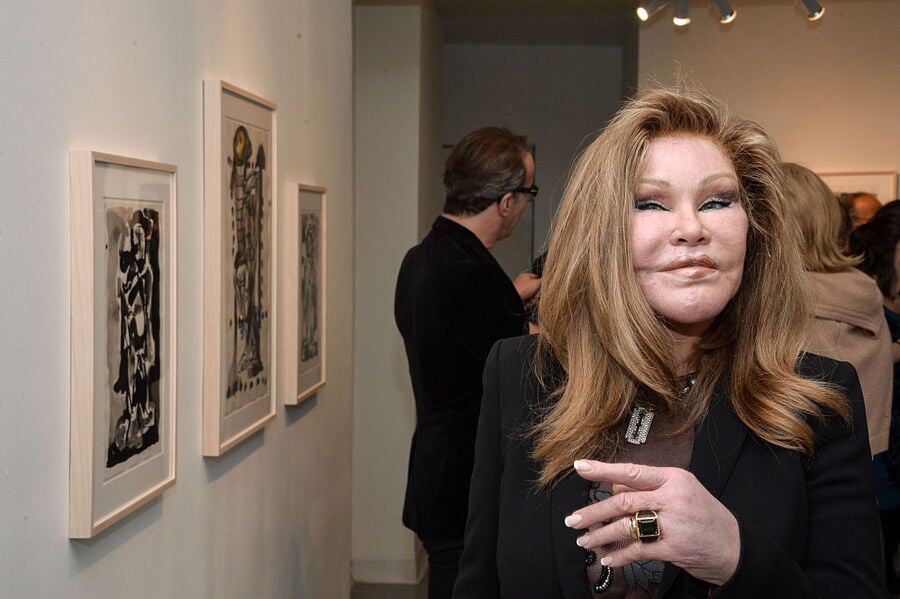 At the end of the sordid divorce case, Jocelyn was reportedly awarded $1.5 billion and an allowance of $100 million a year for 13 years. This allows her to live quite extravagantly. In fact, she claims to have spent $60,000 on a year's worth of phone bills and $547,000 on food and wine in a 12-month period. The judge presiding over her divorce stipulated that she was not allowed to use any of this money towards new cosmetic surgeries.

Three years after their divorce, Alec inherited half of his father's estate, which included one of the largest private art collections in the world, estimated to be worth $10 billion. Significant portions of his inheritance went to pay Jocelyn's alimony payments.

After the divorce, Jocelyn has stayed even more out of the public eye. She's been dogged by a myriad of legal battles over the years—usually with landlords looking to evict her for unpaid rent. In 2015 she was sued by American Express over $70,000 in credit card debt. She was also sued that same year over a $15,000 a month Beverly Hills home that she allegedly trashed and then abandoned while owing $165,000 in unpaid rent and $15,000 in other related fees.

While she was in court in early December, Jocelyn used a cell phone in the courtroom to fix her hair and put on makeup. Cell phones were forbidden in the court room. The phone was taken from her.

When Wildenstein left court later that day, he famously altered face was hidden behind a pashmina.