If You Want To Make A Ton Of Money, Write A Beloved Children's Book. This Is The Story Of One Very Lucrative Caterpillar…

A good children's books can spark a child's imagination, teach them to read, and instill a love for the written word that will last a lifetime. So, when a children's book author writes a story that children everywhere latch on to, it can quickly become a phenomenon that is adored by everyone from parents, to teachers, to babysitters. Such is the case with Eric Carle's "The Very Hungry Caterpillar."

Eric Carle died earlier this week at the age of 91. He died a VERY wealthy man thanks largely to just one book. Before he sold the rights to his franchise to Random House in 2020, Eric Carle earned anywhere from $5 million to $8 million in book royalties every year.

So what makes this book, and many of the others Eric Carle has written, stand out? It requires real talent, and the ability to get inside the mind of a child.

Eric Carle was born in Syracuse, New York, on June 25, 1929. His mother was from Germany and when Carle was in elementary school, she decided to move the entire family back to her home country. He spent the rest of his childhood and teen years in and around Stuttgart.

World War II violently interrupted Eric's home life. His father was drafted into the German Army, and was subsequently taken prisoner. When he returned to what was left of their home, he weighed only 85 pounds, and was "a broken man", according to Carle.

As a young teen, Carle was forced to dig trenches on the Siegfried line, and found himself witnessing death all around him every day. After graduating from the Academy of Fine Arts Stuttgart, he fled back to America with only $40 to his name. An excellent artist, he began working for The New York Times, but was subsequently drafted into the US Army and stationed back in Germany during the Korean War. At the conclusion of his service, he returned to New York. After working for the New York Times for a few more years, he shifted his focus to advertising.

His illustration of a lobster for an ad, led to an interesting offer from a local author. Bill Martin, Jr., a successful teacher and writer, contacted Carle and asked if he would illustrate a book that was eventually published as "Brown Bear, Brown Bear, What Do You See?" in 1967. The book became an almost instant bestseller, and suddenly, Eric Carle found his illustration and graphic design career to be veering off in a whole new direction. In 1969, he decided to write and illustrate a book about a worm. The story was inspired by the hole his hole puncher made in a stack of paper. The book was originally meant to be about a bookworm, but his editor suggested a caterpillar, and the story for the book quickly grew from there. The simple, illustrated tale became known as "The Very Hungry Caterpillar". The plot line follows a caterpillar as it is born and eats its way through everything in sight. Eventually, it spins a chrysalis and emerges as a butterfly. 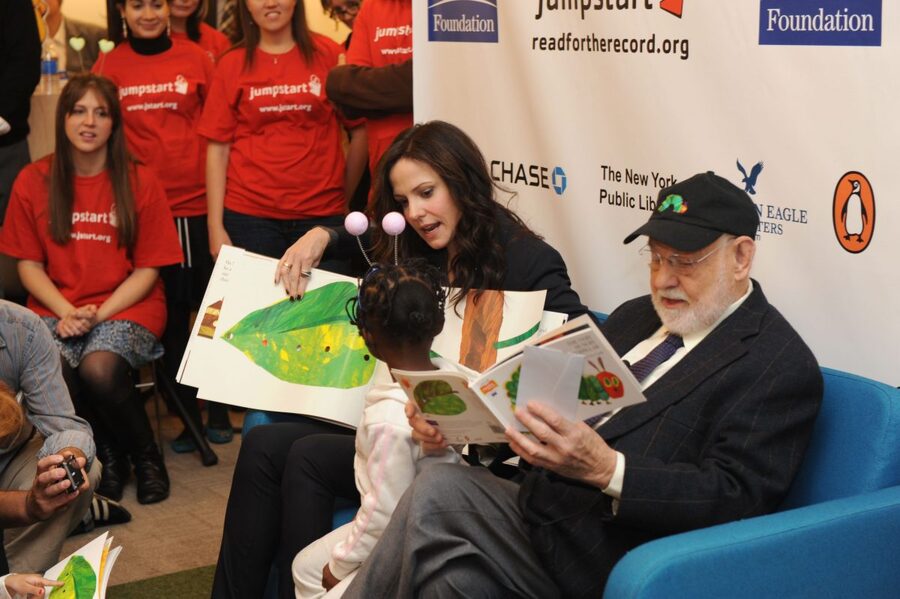 The book is a prime example of what would become Carle's signature style. The illustrations are made up of multiple hand-painted papers, which Carle cuts out, and layers, collage-style, to create each image. Each page of the book is a different shape, representing the different items the caterpillar eats, and a hole runs through each item. The book was incredibly difficult to print because of the irregularly shaped pages. Carle's editor, Ann Beneduce, eventually found a printing house in Japan that thought they could handle the job. The book was finally published on June 3, 1969.

Fast forward to today, and "The Very Hungry Caterpillar", has sold over 38 million copies around the world. It's small amount of text has been translated into 58 languages. It is estimated than one copy of the book sells every minute, somewhere in the world. It has been nominated for, or won, just about every major children's literature award available. In 2003, Carle was awarded the Laura Ingalls Wilder Award for his contribution to children's literature, and he was the US nominee for the prestigious Hans Christian Anderson Award in 2010.

While "The Very Hungry Caterpillar" was a massive success, it is not the only book that Carle wrote and illustrated. Though he is most widely recognized for that early work, he has since gone on to write and/or illustrate 70 other books, many of which have become bestsellers. These works include "The Grouchy Ladybug", "All Around Us", "All in a Day", and "Little Cloud", among many others. He has sold 170 million copies of his books worldwide, and his works continue to sell at a rate of almost 1 million per year.

The books have generated hundreds of millions of dollars in revenue.

In late 2019 Eric sold the rights to his Caterpillar franchise to Random House Books for an undisclosed, presumably very large payout.

At the time of his death Eric Carle was worth at least $80 million.

Before his passing earlier this week, Eric and his wife ran The Eric Carle Museum of Picture Book Art, a museum dedicated to children's book art, located in Amherst, Massachusetts. He had previously stated that he writes his books to "bridge the gap between home and school". With his stories he is always trying to find a way to help kids handle the fear that comes with leaving the security of home and going to school the first time. He calls that transition "the second biggest trauma of childhood". (The first is birth.) With that in mind, he tries to instill a sense of wonder and excitement about nature, school, and the creative possibilities of the unknown. Based on his wartime experiences, it's safe to say that Eric Carle understands fear – and how to conquer it. That understanding, coupled with amazing artistic abilities, has created some of the most beloved children's books of all time, and instilled a love of reading in millions of kids around the world.