By Brian Warner on July 5, 2013 in Articles › Entertainment

Many of you might be surprised to learn that for a brief period in the 80s there were actually two active professional football leagues in the United States. In addition to the National Football League (NFL), there was a totally independent rival league called the United States Football League (USFL). As crazy as this sounds, there was actually a time when the USFL posed a fairly significant challenge to the NFL's dominance in American football. One major advantage the USFL had was they did not adhere to any pre-ordained contract limits or salary caps, so they were free to toss huge contracts at future NFL superstars like Doug Flutie, Herschel Walker, Jim Kelly and Steve Young. Steve Young was a particularly big coup for the USFL. In 1984, Young rejected the NFL draft and instead accepted a record setting $40 million contract with the USFL's Los Angeles Express. The contract was extraordinary for two main reasons: First, it was the largest sports contract ever awarded in history up to that point, equal to more than $90 million today after adjusting for inflation. And second, it wasn't a standard contract that paid a set amount over four or five years. To help the fledgling team and league survive, Steve agreed to accept his payment in the form of an annuity that would be spread out over 40 years. That means, despite the fact that the USFL went bankrupt long ago, today Steve Young is still earning millions of dollars every year off a contract he signed 30 years ago with a team that no longer exits. 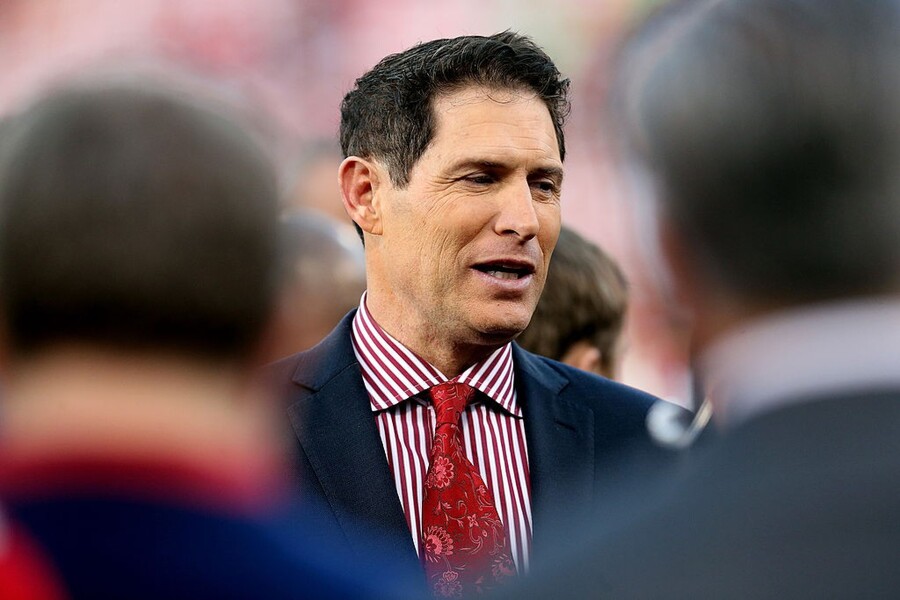 The USFL debuted in 1983 and by 1984 was attracting some of the country's top college talent. The league even attracted its very own group of flamboyant billionaire team owners like Donald Trump and a man by the name of J. William Oldenburg. The USFL struck forward-thinking partnerships with ABC and a little known cable network called ESPN to deliver nationally televised games every week. And the games got ratings! Physical attendance at the stadiums was hit and miss, but overall the league was strong enough to field 18 fully functioning professional teams scattered across the country for three full seasons.

Steve Young's childhood dream was to be a star quarterback in the NFL. After an extraordinary 11-1 senior season at BYU, Steve found himself on the verge of making that dream come true as the highly anticipated #1 NFL draft pick of 1984. Before the draft actually happened, Steve met with a few of his potential future NFL teams, most notably the Cincinnati Bengals who held the #1 pick that year. His reception Cincinnati's owner Paul Brown consisted of no more than a brief handshake and one word, "hello". Unfortunately, even if the Bengals had made more effort to court Steve, in terms of salary they never would have been able to compete with the USFL. Due to NFL rookie salary restrictions, the biggest offer Cincinnati could have made was a $500,000 per year over four seasons, un-guaranteed, with a $1 million signing bonus. 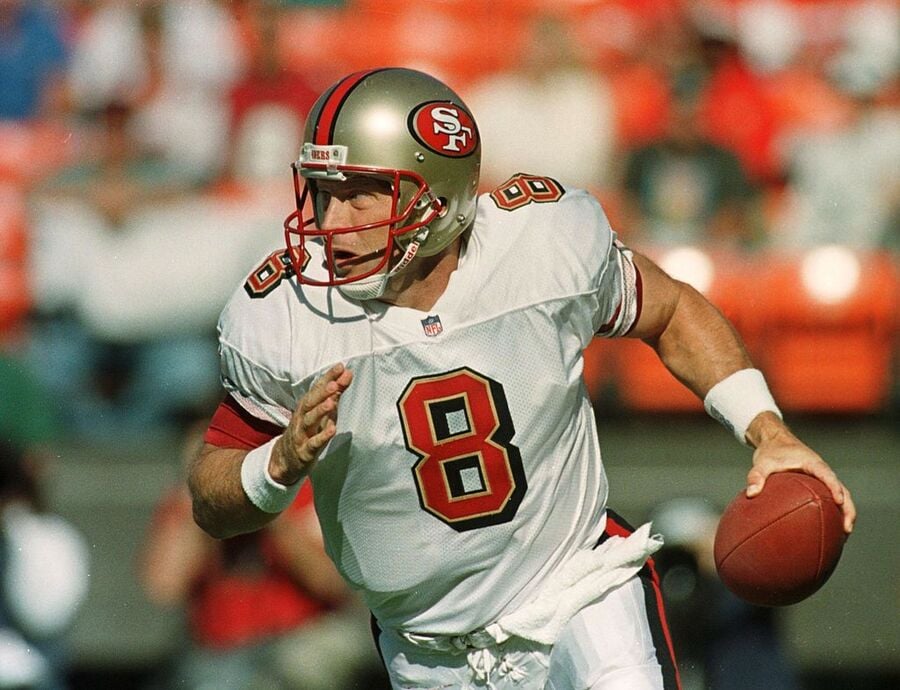 The Los Angeles Express were owned by an eccentric San Francisco real estate billionaire named J. William Oldenburg. Oldenburg basically bought the team in order to keep pace another eccentric real estate billionaire: Donald Trump. Trump owned the New Jersey Generals and was on a mission to spend whatever it took to bring home a championship. Not to be outdone, Oldenburg made it his mission to sign the future Hall-of-Famer Steve Young, no matter the cost. Steve was flown out to Oldenburg's lavish San Francisco headquarters on a private jet in the early part of 1984. In the building's lobby, Oldenburg hung a gigantic poster that read: "STEVE YOUNG, MR. BYU, MR. UTAH, MR. EVERYTHING!"

Steve's head was spinning when he walked away from his meeting with J. William Oldenburg and the Los Angeles Express. To his utter shock, The Los Angeles Express were offering a $40 million contract that was 100% guaranteed and came with $4 million cash up front. That's the equivalent of $90 million contract with $9 million up front in 2013 dollars. By comparison, 2013's #1 draft pick Erick Fisher, signed a deal that is worth just over $22 million. When you recall what The Bengals were offering, you can start to understand why Steve was willing to give up on his NFL dreams.

In order to make this contract work with the fledgling team, Steve agreed to a rather unorthodox deal. After his bonus, Steve would earn just $200,000 in year one, $280,000 in year two, $330,000 in year four and $400,000 in year five. The remaining $30 million would be deferred over 37 years starting when Steve turned 28 and ending when he was 65 in the year 2027. The contract was backloaded, which meant that the payments would escalate to $1 million per year in 2014, then $2.4 million and eventually topping out at $3.173 million in the contract's final years. Furthermore, Steve signed a $100,000 a year endorsement deal with a Utah-based bank called State Savings Loan Association, which also happened to be owned by J. William Oldenburg.

Just to be safe, Steve's agent insisted that the contract be insured just like any other annuity that you would purchase from a bank. That meant Steve's deferred $30 million was covered "in case the team or the league folds". This final deal point would prove very wise.

So how'd this all work out? In his rookie season Steve and The Express put up a decent showing and even made it to the USFL's playoffs. Unfortunately that's about as good as it got. The very next season, players and fellow team owners were shocked when the eccentric billionaire J. William Oldenburg suddenly declared bankruptcy. To Donald Trump's delight, it turned out that Oldenburg's empire wasn't anything more than smoke and mirrors built on extremely high levels of personal debt. When Oldenburn came crashing down, so did the Express. Players and staff (except for Steve Young) all stopped receiving paychecks until the league stepped in and took over. On at least one occasion, the team bus driver refused to take the Express to their game because he hadn't been paid in weeks. Amazingly, Steve personally stepped in and paid the driver in cash out of his own wallet.

Similar to J. William Oldenburg, the USFL itself was built on a shaky foundation of sand and debt. Within two years, the entire league imploded. The league over spent on talent and under-delivering on ratings. The final USFL game was played on July 14, 1985 and the league officially ceased to exist a year later. Some USFL teams and players were eventually folded into the NFL. Overall, the USFL was a failed experiment that resulted in $170 million in losses for the league and owners ($400 million in today's dollars). By comparison, 15 years later the XFL failed experiment cost Vince McMahon and the WWE just $35 million.

In retrospect, the USFL's implosion turned out to be a blessing in disguise for Steve Young. He was immediately drafted by the NFL's Tampa Bay Buccaneers in 1985. He was then traded to the San Francisco 49ers in 1987 where he would spend three seasons warming the bench as Joe Montana's backup. Impressively, as he was riding the bench Steve actually went back to school at night and during the off season to get his law degree. On at least two occasions, Steve attended class at BYU the day after appearing in a Super Bowl! By 1991 Steve was starting, and in 1993 the 49ers signed him to a five year $26.75 million deal that was the richest in the history of the NFL. In the NFL, Steve Young eventually went on to be a 7 time Pro-Bowl selection, three time Super Bowl champion (though he only started for one of them because Joe Montana was still on the team), Super Bowl MVP and league MVP. And through it all, Steve was still essentially earning two paychecks thanks to that lucrative USFL contract that was still being paid out by some unfortunate insurance company. The only professional athlete who might have a better deal is Bobby Bonilla.