Start Video Game Company. Sell To Facebook. Earn $500 Million Fortune… All At The Age Of 22. The Story Of Palmer Luckey And Oculus Rift…

By Paula Wilson on April 15, 2015 in Articles › Entertainment

Palmer Luckey might have the most appropriate last name ever. At the age when most of us were struggling to pay the rent on our first shared apartment, Palmer has a net worth of $500 million. Palmer is the 22-year-old founder and inventor of Oculus VR and Oculus Rift. Luckey's invention is so sought after, that he's amassed his fortune from the sale of a product that doesn't even really yet exist. What's his story? Here's how one twenty-something used virtual reality to turn himself into a very real millionaire.

Palmer Luckey was born in Long Beach, California, on September 19, 1992. He showed an early interest in electronics, and spent many hours studying high-voltage electronics, one of his favorite subjects. He worked with lasers, Tesla coils, and coil guns, creating his own experiments, and he even built his own six-screen PC. By his early teens, he was taking courses at two local community colleges. When he was 17, he launched an online forum called, ModRetro Forums, where members of the online community could post ideas and suggestions regarding ways to modify their game consoles and PCs. In 2011, he built his first VR prototype in his parents' garage. He decided to create his own system, since he found aspects of the currently available VR headsets to be lacking. With his prototype, which he named CR1, he attempted to fix display issues while also experimenting with ways to make the headset wireless, increase the field-of-view, and reduce the weight and size. 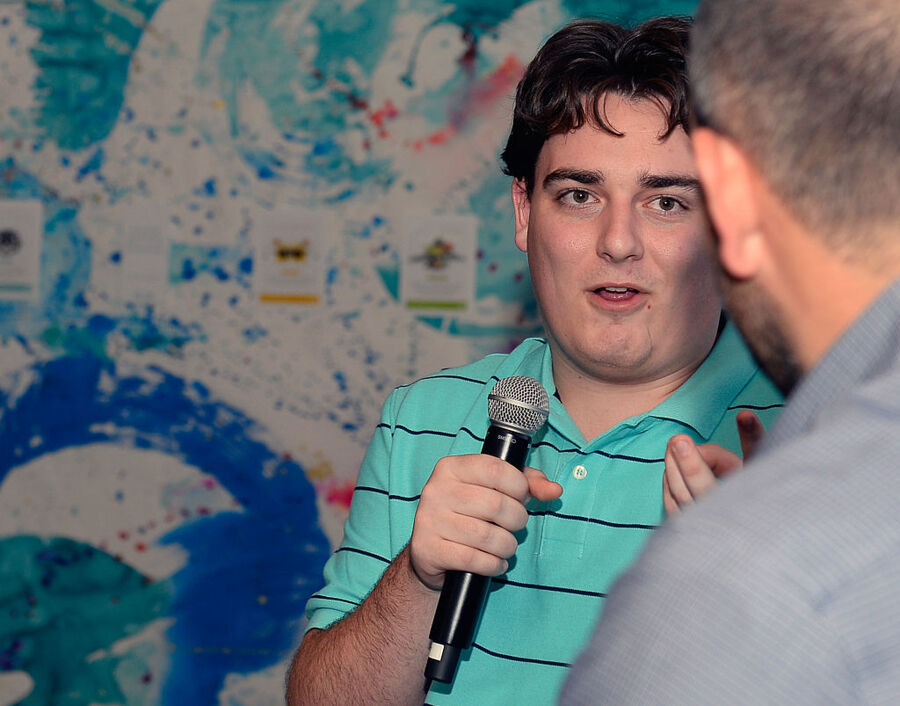 Even with all of his focus on electronics, he chose to major in journalism when he enrolled at Cal-State-Long Beach when he was 18. While going to classes and running one of his college's online newspapers, he continued to explore electronics, paying special attention to virtual reality. Virtual reality (VR) equipment can be expensive, so he earned the funds to fuel his VR habit by repairing boats, fixing broken iPhones, and teaching sailing.

Palmer's multiple side jobs helped him collect nearly $40,000. He used that money to purchase a wide range of VR headsets — over 50, in fact. He then scoured auctions and going-out-of-business sales to find the best headsets. He also worked off campus as an engineer at Mixed Reality Lab (MxR). The team he worked with was attempting to develop VR systems that were cheaper to produce, but didn't sacrifice quality. In the meantime, he regularly posted about his own progress with his CR1 prototype on a virtual realty forum, MTBS3D (Meant to Be Seen 3D).

With his own prototype, Luckey wanted to create something affordable and useful for all gamers. In 2012, he launched his own company called Oculus VR. He founded the company in order to launch a small Kickstarter campaign. He was now up to the 6th version of his headset, which he had dubbed, "Rift," and wanted to sell the design as a "do-it-yourself" kit. He intended for the Rift kits to go to 100 or so VR enthusiasts who funded his campaign. One of those enthusiasts was John Carmack, a well-respected game developer who had been following Luckey's work via MTBS3D since the beginning. He contacted Luckey and asked for one of the prototypes. From there, Carmack modified it and then modified one of his own games to work with the Oculus system.

Carmack premiered both the game and the VR system at the Electronic Entertainment Expo in June of 2012, and announced that two versions of one of his most popular games, "Doom 3" and "Doom 3 BFG Edition," would have Oculus Rift compatible versions. Almost overnight, Luckey became a VR rockstar.

At this point, Luckey decided to drop out of college to focus on his product. Realizing he needed some support, he approached Brendan Iribe of Scaleform and Gaikai, Michael Antonov of Scaleform, and Gabe Newell and Michael Abrash of Valve. All four men gave him substantial money to fund what had become an increasingly ambitious Kickstarter campaign. As the interest in Oculus Rift grew, they became Luckey's company directors. Brendan Iribe is now the CEO, John Carmac is the CTO, Michael Antonov became Chief Software Architect, and most recently, Michael Abrash came on board as Chief Scientist. By August of 2012, Oculus VR and Oculus Rift had grown exponentially. Oculus VR announced a revised Kickstarter campaign and amassed over $1 million in funding in less than 36 hours. They went on to raise $2.4 million from crowdfunding and another $88.6 million from private donors and venture capitalists.

To date, Oculus VR has only released prototypes of the Rift. The first developer kit became available in September 2012 for $300, and sold at a rate of 4 to 5 per minute initially. They have since released an update to that system called, "Crystal Cove," a second developer kit, DK2, and an update to that called, "Crescent Bay." Oculus VR also launched its own software development division to create games and content specifically for the Rift. They've sold 100,000 units of DK2, since its launch in March of 2014. They are also developing a consumer version, with integrated audio, and noticeable improvements with regard to display quality and weight. However, there is no concrete release date for the consumer version yet.

Even with all of the uncertainty surrounding their product, when it comes to VR, Oculus VR is at the head of the class and Luckey is class president. Pretty soon, every technology company in the world was chomping at the bit to acquire Palmer's creation. In March of 2014, Mark Zuckerberg of Facebook announced that he was purchasing Oculus VR for $2 billion. That $2 billion was made up of a combination of $400 million in cash, 23.1 million shares of Facebook (worth $1.9 billion as of this writing), and an additional $300 million to be paid in the future.

The very lucky Palmer Luckey, went from building a headset in his parents' garage in 2011, to having a net worth of $500 million three years later.

It's the kind of "rags to riches" tale that can really only happen in our technological age, and, while success of this type is not as common as it was during the dot-com bubble, it does still happen. Here's hoping we can all someday be as lucky as the now very wealthy Palmer Luckey!