Sotheby's and Christie's are the premier auction houses for art. In a way, they are like siblings – they are more alike that either would like to admit and they are always trying to one up each other. That's what makes this set up so perfect—two siblings have hired them to sell their parents' extensive and expensive art collection. Oh, and by the way, these siblings are not on speaking terms. Let the games begin! 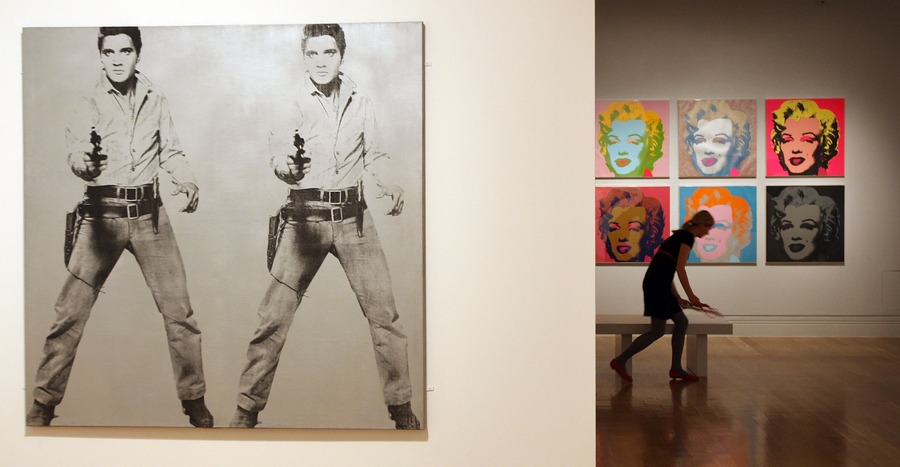 The sisters are the adult daughters of the late Jerry Spiegel, a farmer turned real estate tycoon from Long Island and his wife Emily. The Spiegels had a shared passion – finding young artists before they hit the big time. Their collection includes early works from Jean-Michel Basquiat, Jeff Koons, and Julian Schnabel.

Jerry and Emily Spiegel died eight years ago. They left their art collection to their two daughters with each receiving half of the collection's estimated value. For the auction of the works, one sibling chose Sotheby's and the other chose Christie's. The collection is expected to sell for more than $160 million.

The competing auctions will take place on May 17th and 18th and the focus is on which sister will make more money.

The Spiegel's were major collectors. The gave Andy Warhol's "Double Elvis," a paining depicting two overlapping images of Elvis holding a gun, to the New York Museum of Modern Art. The painting is a centerpiece of the museum's contemporary collection.

When the Spiegels died in 2009, their daughters were in a long-standing feud that has been going on since at least 1999. The sisters, Pamela Sanders, 60, and Lise Spiegel Wilks, 59, do not speak to each other even to this day.

Being sisters, they have a lot in common. Both graduated from the University of Pennsylvania, are married to men in the real estate industry, and are big supporters of the arts and education.

Their parents' art was divided between the siblings in 2016. Then Sotheby's and Christie's, dueling siblings themselves, began to court the women. Pamela chose to entrust her half of the collection to Christie's. Pamela's collection contains more than 100 works including a 1964 painting by Sigmar Polke that is expected to sell for $20 million.

Lise chose Sotheby's. She is selling only one work of art—an early painting by Jean-Michael Basquiat depicting a human skull. It was the jewel of her parents' collection that they bought it in 1984 for $19,000. Sotheby's has guaranteed Lise that the Basquiat will sell for more than $60 million.

It seems like the late Spiegels intended to equally split the value of their collection between their daughters but that's pretty hard to do with art. You don't know the true value of it until you sell it.

It looks like Pamela will come out ahead in this sibling rivalry battle. For the 107 works of art she is selling, Christie's has guaranteed her more than $100 million. Of course, since Lise is only selling one piece, she may have future auctions up her sleeve.