Shockingly, Mein Kampf Is Still A Bestseller In Some Places. Who Gets The Royalties??

One year ago, the first reprint of Adolf Hitler's magnum opus "Mein Kampf" since World War II was released. Shockingly, the book sold more than 85,000 copies and spent 35 weeks on Der Spiegel's non-fiction best seller list. What the what? Who is buying this book? And with Adolf Hitler pretty much the most despised man in history, who is getting the royalties from this resurgence in popularity of his Nazi manifesto?

In its first year of publication in 1925, "Mein Kampf "sold 9,000 copies and earned Hitler no royalties at all. As Hitler's political profile began to rise, so did his books sales. In 1930 he sold 55,000 copies. In 1933, the year Hitler became Chancellor of Germany, sales exploded to over 850,000 copies and Hitler made millions. That's somewhat understandable, given the era and Hitler's high profile at the time. But today?

The new run of "Mein Kampf" was printed by the Munich-based Institute for Contemporary History. The institute planned to print just 4,000 copies of the book. However, after announcing their plans to re-release it, the institute received 15,000 pre-orders. 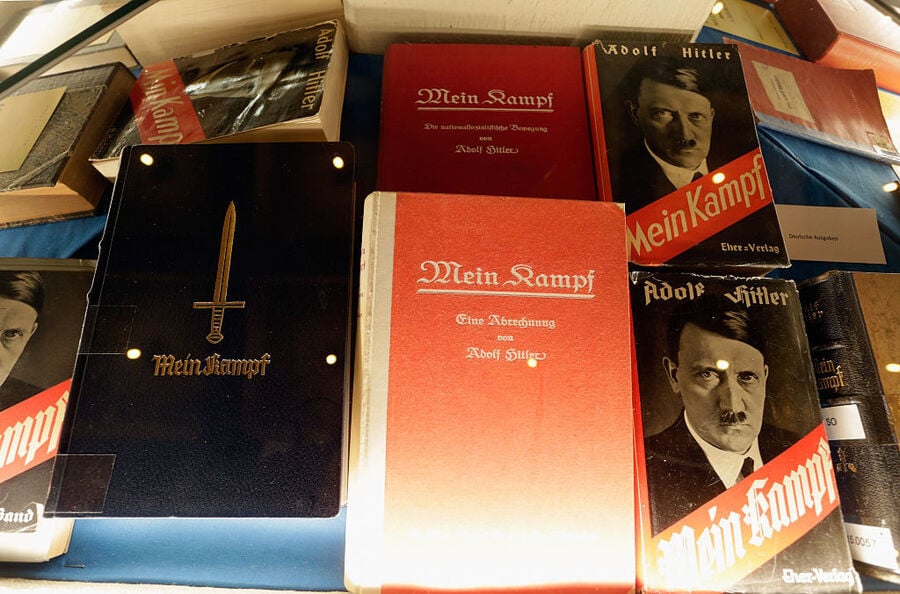 Now, a year later, the latest edition of "Mein Kampf" is in its fifth printing. The institute is publishing a sixth edition later this month.

Adolf Hitler wrote "Mein Kampf," which means "My struggle" between 1924 and 1926. There were two volumes. The first was written from Hitler's prison cell after the Nazi party was banned following an attempted coup in 1923. The second volume was written while Hitler was on retreat and it outlines his political ambitions.

There were more than 12 million copies of "Mein Kampf" published in Hitler's era and most copies of the book were burned after the war. However, hundreds of thousands of copies of the original "Mein Kampf" still exist. They can be found in historical bookstores and antique stores. It has been illegal to print "Mein Kampf" since the end of World War II.

At the end of World War II, the Allies transferred the copyright of the book to Bavaria under the condition that all reprints would be banned.

On December 31, 2015 the copyright on the infamous book expired. That's when the Institute for Contemporary History decided to issue an annotated version of the book. Their purpose, to expose the Nazi regime as it really was – full of half truths, out right lies, and vicious tantrums.

So, to get back to our questions. Who is reading it? According to data, the book is mostly being purchased by academics and historians.

Regarding the royalties, because of the expiration of the copyright, anyone with a printing press can sell the book within Germany and not pay a single royalty. Can you believe that? It does get a bit more complicated outside of Germany.

In the U.K., "Mein Kampf" was banned from publication from 1945 to 1969. After that, royalties from the book were donated to anonymous charities. It isn't that easy, however, to find charities that will accept money made off that book.

In other countries, the original "Mein Kampf" was never restricted, has been recently a best-seller in Sweden, India, and Turkey. Those royalties are reluctantly accepted by the state of Bavaria and then distributed to charity.

So the ultimate answer to the question of who gets the royalties from Adolf Hitler's "Mein Kampf" is: charities.