The Incredible Rise And Shocking Fall of Lenny Dykstra

Lenny Dykstra is a Major League Baseball legend. During his 12 year professional career, Lenny played with a such an unrestrained ferocity that he earned the nickname "Nails". As in, "tough as nails". He is a three time all-star, a .285 lifetime hitter, a Silver Slugger and a World Series champion. Unfortunately, Lenny is also also a convicted felon. And while it may not be particularly shocking to hear that a former pro-athlete found himself on the wrong side of the law, the manner in which Lenny Dykstra ended up in cuffs is nothing short of amazing. In just a few short years, Lenny went from living in an $18 million dollar mansion (the former home of hockey legend Wayne Gretzky) to living out of his car, to living in a 6×8 jail cell. How on earth did he manage to fall so far, so fast?

Lenny Dykstra was drafted into the pros straight out of Southern California's Garden Grove High School. He was chosen by the New York Mets as a 13th round pick of the 1981 MLB Draft. At 5'10" tall, he'd been told most of his life that he was too small to play professional baseball as a center fielder. Dykstra didn't believe it and set out to prove the naysayers wrong. He absolutely lit up the minor leagues, leading the Carolina League in at-bats, runs, hits, triples, batting average, and stolen bases in 1983. One of his Double-A teammates in 1984, the legendary Billy Beane, said that Dykstra was "perfectly designed" from an an emotional and physical standpoint to play baseball. Billy also said that Lenny seemed to have "no concept of failure". Dykstra's self-confidence was legendary. A former team mate said, "In a game where we all were hoping to be great, Dykstra acted like he already knew he was great." Ironically, this unbreakable and totally blind self-confidence probably played a huge part in Lenny's eventual downfall. 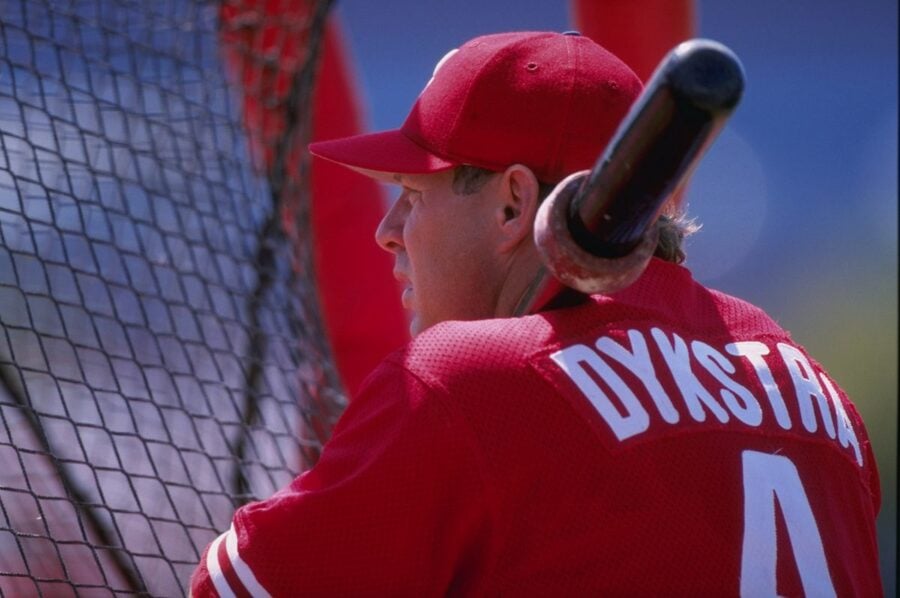 In 1985, the 23 year old was called up to the major leagues to replace the Mets' starting center fielder, Mookie Wilson, who was injured. His salary for the season was $92,500 (roughly $200,000 today). Dykstra's rookie season performance bolstered the Mets to a 98-game winning season where they barely lost the NL East division title. It was their best season in years thanks largely to Lenny's explosive success. Just a few years earlier, the Mets were winning an average of 65 games per year.

The following season, Dykstra's salary was raised to $202,500 ($430,000 today). As leadoff hitter, Lenny led the Mets to capture the division crown with a 108-game winning season. In Game 3 of the NLCS against the Astros, Lenny cemented his MLB legacy with a walk-off home run that is still considered one of the biggest hits in Mets history and the seminal moment in Dykstra's career. The Mets advanced to the World Series where the faced the Boston Red Sox. In Game 3 of this series, with the count at 1 and 1, Lenny hit a leadoff home that reinvigorated The Mets confidence at a desperate time. Prior to this homerun, The Mets were had just lost the first two games of the series, both of which were home games at Shea Stadium. Using their renewed confidence from Lenny's homerun, The Mets eventually rallied back to beat the Red Sox in seven games and capture the World Series title.

In 1989, Lenny was traded to the Philadelphia Phillies, where he became a beloved fan favorite player. On the other hand, his time in Philadelphia was marked by epic highs and lows. In 1990, he was a starter in the All Star Game. He also led the league in hits and finished fourth in batting average. In 1991 and 1992 he was plagued by injuries. He crashed his car in 1991 while driving drunk and lost two months of playing time due to fractured ribs, a broken cheekbone, and fractured collarbone. In August of the same year he re-broke his collarbone in a game in Cincinnati when he ran into the outfield wall. He missed the rest of the season. On opening day in 1992, Dykstra broke his hand when it was hit by a pitch.

It all turned around again in 1993 when the Phillies made their first playoff appearance in 10 years. Dykstra played in 161 games, led the league in runs, hits, walks, and at bats. He was second in the league's MVP voting to Barry Bonds. He led Philadelphia to the World Series, where they lost in six games to the Toronto Blue Jays.

Lenny Dykstra's flamboyant baseball career came to an end in 1996 when he was 33-years old. In total, he earned more than $36 million in salary during his 13 professional seasons. By all accounts he was easily set up to live an easy post-baseball life of autograph signing, hand shaking, and golf playing.

For a brief moment, Lenny appeared to be living the life of a seemingly brilliant entrepreneur. He took part of his baseball fortune and invested in several car-wash and quick-lube franchises throughout the Los Angeles area. The businesses were so successful that he was able to take home a $1 million dollar annual salary.

Over the next few years, business boomed. In 2007, Lenny sold his car wash and lube empire for $51 million. He upgraded from a $4 million mansion to an $18 million mansion that he bought from Wayne Gretzky. He bought a dozen cars and began to fly exclusively on private jets. Not too shabby for a jock who barely went to high school! It should also be noted that Lenny screwed his family members out of earning anything from the sale. His own brother eventually sued him for $4 million.

Lenny's entrepreneurial instincts soon caught the attention of CNBC personality and TheStreet.com founder, Jim Cramer. Cramer was so impressed by Lenny's business acumen, that he set the former slugger up with a weekly stock picking column on TheStreet.com. Clients paid $995.95 per year for stock picking advice mixed with baseball metaphors. In 2008 he started a magazine called The Players Club. The magazine was touted as a financial guide for wealthy professional athletes.

In 2009, Lenny publicly estimated his personal net worth to be just under $60 million. Apparently that wasn't enough. Not only was he not satisfied with $60 million, Lenny wanted to be a billionaire. Or at least, he wanted to live like a billionaire. Around this time, Lenny was living like a corporate kingpin without the billion dollar bank account. That can't last forever. Also, The Players Club magazine turned out to be a massive financial disaster. It bled millions of dollars and eventually collapsed.

In July 2009, almost exactly one year after publicly bragging that he was worth $60 million, Lenny shocked the world when, seemingly out of the blue, this financial wizard filed for Chapter 11 bankruptcy. In his filing, he claimed to have less than $50,000 in assets and $30 – $50 million in liabilities.

Dykstra's behavior soon became erratic. He didn't pay his bills. He badgered employees at all hours of the day and night, even pressuring some of them into giving him access to their credit cards with guarantees that he'd pay it all back with interest. Dykstra ran up tens of thousands of dollars on a Player's Club employee's credit card. One charge was for a $32,000 private jet rental from Atlanta, Georgia to Helena, Montana. Dykstra used the same credit card scam on his mother. Mysteriously, the $700,000 bonus Lenny's son Cutter received when he signed his contract with the Milwaukee Brewers went missing. Kevin Dykstra claims that Lenny invested and lost that money.

In August 2009, Lenny was living out of his car. In September, he sold his 1986 New York Mets World Series ring and other MLB memorabilia to a Beverly Hills pawn shop.

In June 2010, it was revealed that Dykstra had lied under oath, hidden and sold assets, and acted in a fraudulent and deceitful manner during his bankruptcy case. Federal prosecutors said that Dykstra hid, sold, or destroyed more than $400,000 of items in his $18.5 million mansion. He allegedly sold furnishings and fixtures, including a $50,000 sink to a consignment store.

In June 2011, Lenny really hit rock bottom when was arrested and charged with 25 misdemeanor and felony counts. The counts included grand theft auto, identity theft, filing false financial statements and possession of cocaine, ecstasy, and human growth hormone (HGH). A public defender represented him in Federal bankruptcy court where he pleaded not guilty to 13 charges including obstruction of justice, embezzlement, bankruptcy fraud, and concealing property from the bankruptcy court.

While awaiting sentencing, in August 2011, Lenny was also charged with indecent exposure. He had apparently been placing Craigslist ads for a personal assistant. When the female-only candidates arrived, he allegedly told them that the job also required massage service. He would then expose himself to them.

In March of 2012, Lenny was sentenced to three years in prison for grand theft auto and filing false financial statements. In July 2012, he was sentenced to six months and a half relating to three charges: bankruptcy fraud, concealment of assets, and money laundering. He also admitted to hiding, selling or destroying over $400,000 worth of items that were supposed to be part of his bankruptcy filing.

Keep in mind, just three short years earlier, Lenny was riding high as a respected entrepreneur and financial guru. He had a net worth of $60 million. Then it was all gone. Lenny was a World Series winning professional baseball player who had a whole life ahead of him when he retired. He was released from prison in June 2013 but now, he's a felon. His wife divorced him. His $18 million mansion is gone. His fortune looks bleak. A truly sad cautionary tale not just for athletes, but for anyone who aspires to achieve financial greatness someday. The lesson here? Hard to say. Be humble? Don't commit fraud?