By Brian Warner on September 17, 2012 in Articles › Entertainment

Have you ever wondered what happens when famous people bump into each other in public? Do they pretend to know each other and ask how their days are going? Do they play the name game to figure out which celebrity friends they have in common? Do they exchange numbers and plan to meet another time for dinner? And what happens when those two celebrities happen to be two of the most famous people on the planet with a combined net worth of $600 million? Well this celebritynetworth.com reporter just witnessed one of the funniest and strangest public celebrity encounters of all time.

This all went down in Brentwood, California which you might recognized because it's where OJ killed his wife (allegedly). In fact this story takes place just a two minute drive from the condo where Nicole was killed. Earlier today I walked to a place called the Brentwood Country Mart for lunch. The Brentwood Country Mart is a quaint open-air shopping area with lots of little expensive boutiques and a great food area.

I walked in around 12:30pm, ordered my burrito, then sat down at an empty picnic table. To my surprise I notice that none other than the Priceline negotiating Captain Kirk himself, Mr. William Shatner is sitting one empty picnic table away from me. Shatner was with someone who appeared to be his wife, an assistant, and some young kids, possibly his grand kids. He was wearing sweatpants, new balance sneakers, glasses and a fisherman's hat that covered most of his forehead. Pretty much the standard uniform for an 80 year old man on a Sunday afternoon (yes Shatner is 80. Google it for yourself, I didnt believe it either).

Aside from Shatner's group and me sitting solo, the area was pretty much empty when all of a sudden who walks in and sits down directly in front of me and just across from Captain Kirk? Arnold Freaking Schwarzenegger. The former Governor/Terminator, current lovechild hider, was with one of his kids and a body guard. After the body guard felt comfortable about the situation he actually asked if he could sit down next to me at my table because I guess I had the best vantage point. To give you some idea of how close we were sitting, I pretended to be checking my gmail and snapped this sneaky pic: 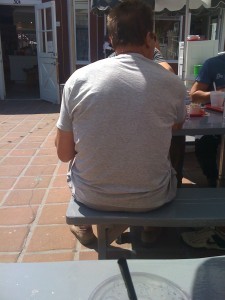 Arnold Schwarzenegger Sitting in Front of Me

In this photo, you can't see Shatner but he's sitting right behind Arnold's friend wearing the blue T-Shirt. Shatner was finished eating so he and his family threw all their stuff in the trash and started to get up to leave. At this point Captain Kirk sees The Terminator and his eyes get really big. As his family walks out William makes a b-line for Arnold, extends his hand and says:

"Bill Shatner, nice to see you".

Arnold shook the hand but other than that did not acknowledge Shatner's existence in any way. He didnt lift his head, didn't utter a word, he actually seemed really annoyed that he was being bothered. Shatner appeared stunned. I think he was expecting a BIG BIG reaction. (Imagine your best Arnold impersonation) "William how are you, great to see you on this lovely Culifornia day!" etc etc… But no, Shatner got SHAFTED big time. He got nothing. Less than nothing. It was one of the most awkward snubs I've ever witnessed. After a few moments of waiting for that big reaction, a red faced Shatner scurried away most likely wishing that Scotty could beam him as far away as humanly possible ASAP. 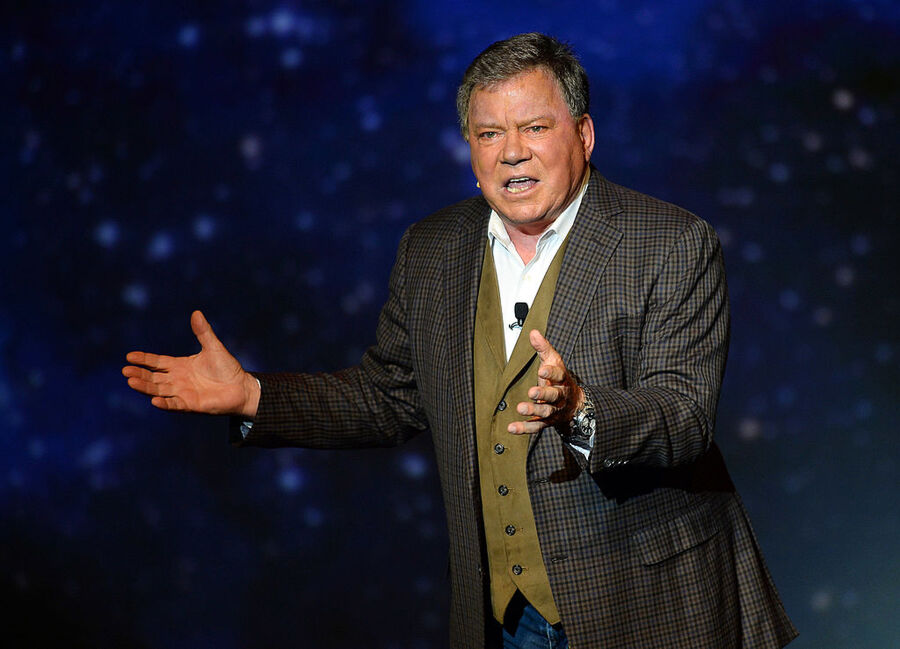 I couldn't help but laugh out loud, pretending that something on my phone was making me laugh. After Shatner had vacated the area Arnold's son looked over at his dad and said:

Son: Dad, that was William Shatner.

Arnold: Who is William Shatner?

Son: Are you serious dad? He was on Star Trek and a ton of other TV shows. I'm pretty sure he's like really really famous. You should know who he is, you've probably even met him before.

Arnold: I have no idea who that man was.

Son: DAD come on. He does all those commercials for that airline website Priceline.

Arnold: Ohhhhhh… He jumps around a lot and looks very silly in different costumes, right? Is that him?

Son: Yes dad, that's him. He has also been in like a million other TV shows and movies. He's really famous, I dont believe you've never heard of him.

Arnold: How am I supposed to remember all that? I dont care about Star Trek. I didnt recognize that man. How's school going are you getting homework done at your mom's house? I'm hungry where's our chicken?

And that was it. William Shatner has been acting in Hollywood for over 50 years. He's arguably one of the most beloved and well known actors of all time and Arnold Schwarzenegger has no idea who he is. Poor William Shatner right? Well, poor would be a bad word to describe him. Thanks to some very shrewd business moves William Shatner's net worth is $300 million. How is this possible? Star Trek re-runs can't pay that well. Turns out when he became the Priceline spokesman back at the height of dot com bubble he insisted on getting paid in stock options instead of cash. After the bubble burst that seemed like a terrible decision but over the years Priceline has not only recovered the company is absolutely soaring today. Priceline's latest stock price is $520 per share up from a post-bubble low of $6 per share. It's not known exactly how many shares Shatner has but his options have been estimated being worth between $200 and $600 million! Not bad for dancing around in silly costumes and karate chopping prices.

Coincidentally,  Arnold Schwarzenegger's net worth is also $300 million, although that amount is likely to go down quite a bit after his divorce from Maria Shriver is finalized.

I stuck around a few minutes after I finished my burrito shell shocked from what I had just witnessed. Two of the most famous celebrities in the world shaking hands a foot away from me. A $600 million handshake. William Shatner being completely humiliated and turning beet red in the face. Arnold Schwarzenegger struggling to comprehend who William Shatner was. His son doing his best to explain it all to him. As I walked to the parking lot I saw swarm of paparazzi standing in front of a black Bentley convertible with red interior. No doubt that was the car of a Terminator and that was confirmed about 10 minutes later when he drove out of the parking lot behind the wheel of that black Bentley convertible.

So that's what happens when famous people bump into each other in public. I've seen many celebrities during my 6 years living in LA and today's encounter was BY FAR the most incredibly funny and awkward experience ever. Have you ever seen a celebrity in public? Tell us in the comments about your experience!