Shaq To Kanye: "I got more money than you, so why would I listen to you?"

By Brian Warner on November 4, 2022 in Articles › Entertainment

On October 8, Kanye West returned to Twitter after a two-year hiatus from the social media platform. Twitter's soon-to-be new owner Elon Musk was quick to acknowledge Kanye's return, tweeting: "Welcome back to Twitter, my friend!" Unfortunately, Kanye's return was short-lived. Later that same day Kanye tweeted: "I'm a bit sleepy tonight but when I wake up I'm going death con 3 ON JEWISH PEOPLE…"

The following morning, Kanye's account was suspended. The suspension ended at some point in the final days of October but Kanye didn't post again until November 2, when he shared a photo of Kyrie Irving with no caption. As you may have heard, Kyrie has also found himself facing accusations of antisemitism after he posted a link to a movie on Amazon Prime which apparently features a number of antisemitic tropes and falsehoods.

The night before Kanye's Kyrie post, Shaquille O'Neal delivered a monologue on his TNT NBA show in which he sharply criticized Irving, even calling him an "idiot." 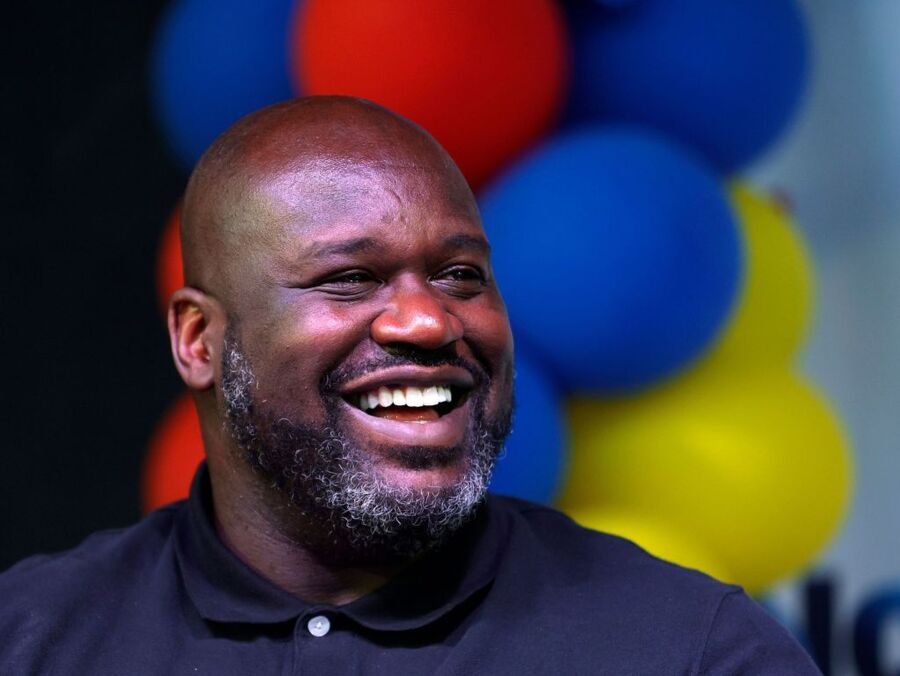 On November 3, Kyrie was suspended without pay by the Brooklyn Nets after he refused to apologize for his actions.

Within hours of the suspension, Kanye sent a series of tweets in which he began calling out specific business people (presumably Jewish business people), for reasons I don't totally understand. For example, he posted a photo of music manager Scooter Braun and his ex-wife Yael Cohen Braun with the caption:

"I'm a bit sleepy but tomorrow …. :))) I promise it will be allll love speech guys I promise."

Shaq is in business with Jamie Salter

To which Shaq replied:

Believe me you don't know me like that. Worry about your business, and to quote the once great Kanye west " I got more money than you, so why would i listen to you" take my advice get your family business in order. Have a great day brother.

Let's repeat that outside of the Twitter embed. Shaq's reply:

"Believe me you don't know me like that. Worry about your business, and to quote the once great Kanye west " I got more money than you, so why would i listen to you" take my advice get your family business in order. Have a great day brother."

That part highlighted in red is an interesting comment. Sounds a lot like Shaq is saying he has more money than Kanye.

Could that be true?

For the record, here's how Shaq and Kanye West's net worths currently compare: 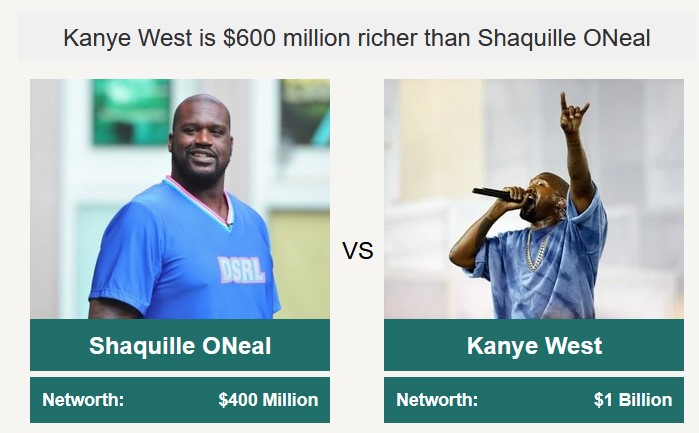 The above comparison was made using our handy-dandy "Compare and Share" tool which you can try out for yourself.

As you can see, we currently peg Shaquille O'Neal's net worth at $400 million and Kanye's at $1 billion. Yes, we still believe Kanye West is technically a billionaire. Interestingly, not that I put too much faith in their math, but when Forbes re-calibrated Kanye's net worth in the wake of his Adidas partnership ending, they landed on $400 million. So if you follow Forbes' math, Kanye and Shaq would actually be tied right now in the net worth department.

So, in my opinion, Shaq's message is not accurate today. But at Kanye's current pace of career meltdown, it might be accurate sooner than you think!