Shakira Net Worth: How Much Has The Colombian Superstar Made During Her Career?

By Amy Lamare on January 31, 2020 in Articles › Entertainment

Shakira is set to shake her moneymaker during half time of Super Bowl LIV in Miami. While the San Francisco 49ers and Kansas City Chiefs battle it out on the gridiron, the Colombian superstar will entertain the billions of people watching the annual NFL championship game alongside, Jennifer Lopez. It is the first time two Latinas will perform the Super Bowl half time show. This, of course, got us thinking about Shakira's long and lucrative career. From "Whenever, Wherever" to "Hips Don't Lie" to "La La La" she's been entertaining audiences for the better part of two decades. She's also appeared as a judge on "The Voice." With that comes paychecks and Shakira has been cleaning up.

Shakira Isabel Mebarak Ripoll was born in 1977 in Colombia. Her name is Arabic for grateful and I'm sure her many fans feel grateful for her catchy music every day. She started writing poetry when she was four years old. Those poems eventually morphed into songs. Music got under her skin early, too. Her dad took her to a Middle Eastern restaurant when she was four, where she heard the Doumbek, a traditional drum used in Arabic music and experienced belly dancers for the first time. Shakira hopped up on the table to dance. Not long after, she started taking belly dancing lessons, which led her to realize she wanted to become a performer. 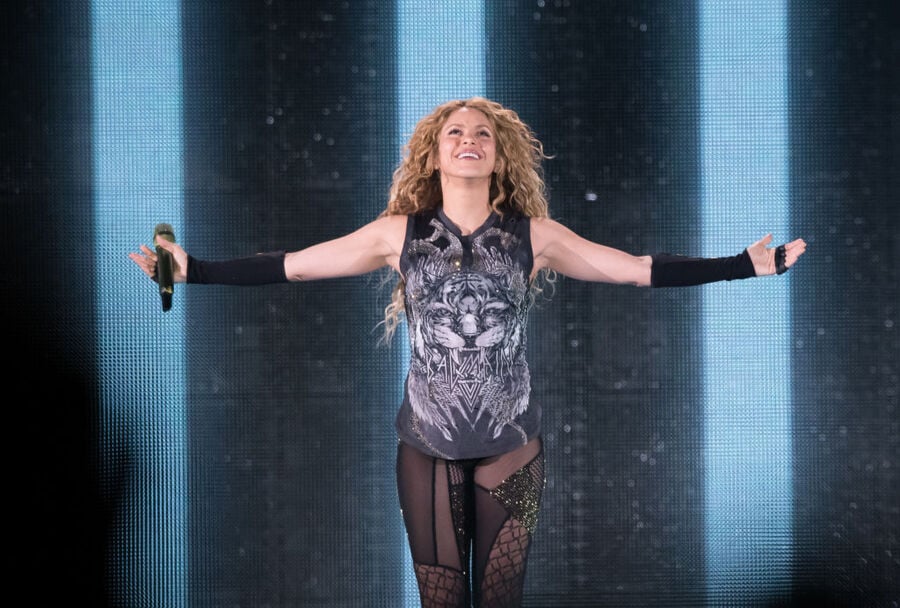 The performer in her led her to be a natural show off at school. She became known as the "belly dancer girl" when she showed off her new dance moves for her friends and classmates. She also enjoyed singing for her classmates and teachers, but she didn't make the school choir in second grade. The music teacher told her that the vibrato was too strong and she sounded like a goat. That seems like a harsh thing to say to a seven-year-old. Nonetheless, Shakira clearly had the last laugh.

Shakira started getting noticed for her singing between the ages of 10 and 13. She met a local theatre producer that believed in her. That producer convinced a record executive for Sony to allow Shakira to audition for him in a hotel lobby. The record producer was impressed, but the label was not. Another audition was planned to surprise Sony executives and the three songs Shakira sang landed her a three-record deal.

Shakira's debut album "Magia" was released in the summer of 1991. Shakira was just 14 years old. The album did well on Colombian radio and gave teenaged Shakira a lot of exposure. The album didn't sell well. Her second album, 1993's "Peligro" also tanked. Fortunately, 1995's "Pies Descalzos" and 1998's "Donde Estan los Lodrones?," were big hits in Spanish-speaking countries. In 2001, Shakira released her fifth album and the first one in English. "Laundry Service" launched the number one international singles "Whenever, Wherever" and "Underneath Your Clothes" and sold 20 million copies. Her next several albums – in Spanish and English – topped album charts and were certified gold, platinum, multi-platinum, or diamond by the Recording Industry Association of America.

Shakira also served as a coach on two seasons of the singing competition television series "The Voice" from 2013 to 2014.

Shakira has sold more than 125 albums worldwide. She is the second-most successful Latina singer of all time behind Gloria Estefan. She is the highest-selling Colombian singer of all time. She has won a number of awards for her work including three Grammy Awards, thirteen Latin Grammy Awards, four MTV Video Music Awards, seven Billboard Music Awards, thirty-nine Billboard Latin Music Awards and a star on the Hollywood Walk of Fame. In 2009, Billboard listed her as the Top Female Latin Artist of the Decade. Shakira is one of the world's best-selling music artists. She is ranked as the most-streamed Latin artist on Spotify and became one of only three female artists to have two YouTube videos exceeding two billion views.

Basically, Shakira has been kicking butt and taking names for the better part of two decades and she has the career paydays, earnings, and net worth to show for it. In 2008, Shakira signed a 10-year, $300 million deal with Live Nation. In 2013, Shakira earned $12 million for "The Voice." Shakira has a net worth of $300 million.