By Simon Gerard on September 19, 2011 in Articles › Entertainment

With the success and popularity of Mad Men still riding high after their 4th Emmy win in a row for "Outstanding Drama Series", we have a new show wanting a slice of their 60s style: The Playboy Club. And if you thought Don Draper was sexy, wait until you check out the stars of The Playboy Club.

This NBC series is based on the legendary first Playboy Club in Chicago in 1963. The story revolves around the lady employees, known as Bunnies and their adventures. Playboy founder Hugh Hefner has given it his seal of approval, but is not involved with the production or scripting.

For a little history on the real Playboy Clubs, the first one in Chicago was opened in 1960 by Hugh Hefner, with clubs opening in New York, Los Angeles, Detroit and other US locations soonafter. Hefner eventually expanded to Playboy Club resorts and casinos, in international locations such as Jamaica, England, Cancun and Manila. The membership fees are attributed to helping fund the expansion of the Playboy empire. The last of the original clubs closed down in 1991 but several new locations opened in 2006 including clubs in Las Vegas, Macao and London.

How much do Playboy Playmates make?

And what you've all been waiting for, the Bunnies: 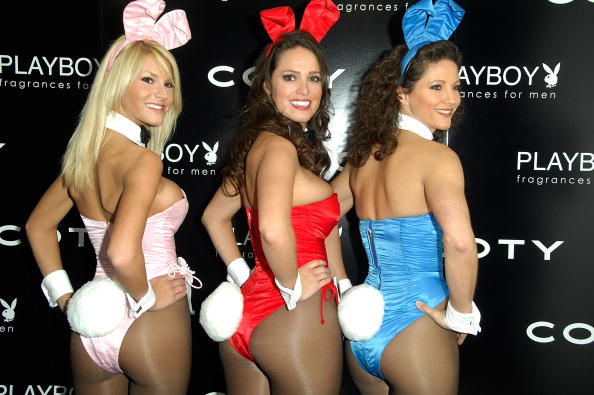 Playing recently hired Bunny Maureen, Amber Heard has made plenty of smaller appearances in movies and TV shows. Besides several independent movies and noted roles in Pineapple Express and Zombieland, she stared alongside Nicolas Cage in the 3D thriller Drive Angry. She is also staring alongside Jonny Depp in the upcoming film "The Rum Diary", where she beat favourites Scarlett Johansson and Keira Knightley for the role. This model actress from Texas is openly bi-sexual, owns a .357 magnum and is a muscle car fan who drives a 1968 Mustang. So she could probably scoop your girlfriend no problem and kick your ass if you tried to resist.

Jenna plays Bunnie Janie. She is an actress, model and dancer who has worked with such big names as Missy Elliot, P. Diddy, Janet Jackson and N'Sync. Her most well known role is Nora Clark in the dance flick Step Up. If you recognise her last name, it's because she is married to G.I. Joe Channing Tatum, who she met on the set of Step Up.

Canadian Leah plays Bunny Alice, a closet lesbian who is part of a sham marriage with a gay man. She has had a few recurring roles in the series MVP, Runaway and Blue Mountain State. She is also a voice actor and singer who released he first album, Storybook, in 2009.

Naturi plays Bunny Brenda, whose goal is to become the first African American Playboy Playmate. A lesser known fact about Hugh Hefner is that he was a civil rights activist for many causes, including racial equality. He hired African American Bunnies, models and Playmates, along with Playboy staff and journalists during the 60s when discrimination was still the norm.

Naturi is famous for acting, singing and rapping, and was part of the R&B trio 3LW during the early 2000s. She's had big roles in the movie Lottery Ticket and the remake of Fame. She has also recorded with Lil' Kim and played her in Notorious, the biopic on the Late Biggie Smalls. If you're a Mad Men fan, she played Toni, a Playboy Bunny who was the mistress of Lane, Draper's British partner.

Laura, who plays the Bunny Mother Carol-Lynne, is an actress, singer and an acclaimed Broadway theater and musical performer.  She currently graces the cover of the October issue of Playboy magazine.