Who Are The Rothschilds? How Did They Rise From The Slums To Become The Wealthiest And Most Powerful Family Ever?

By Amy Lamare on October 17, 2017 in Articles › Entertainment

Just hearing the name "Rothschild" conjures up images of unfathomable wealth and power.  There is no doubt that the family invented international finance as we know it. Mayer Amschel Rothschild was the first of the famous finance family to run a bank.  He established his banking business in the 1760s, and in 2005, Forbes recognized him as the seventh-most influential businessman of all time. He is commonly regarded as the inventor of modern banking. The man who introduced concepts such as diversification, rapid communication, confidentiality, and high volume to the world markets.

The Rothschild empire grew from the slums of Frankfurt's 18th century Jewish ghetto seemingly overnight.  One day, Mayer Amschel Rothschild ran a coin dealership and then in the blink of an eye became the head of the world's richest family, with financial operations run by his five sons in London, Paris, Vienna, Naples, and Frankfurt. Historians have calculated that in relative terms, they were richer than any dynasty today — even the Saudi royal family – many times over.

But how did they do it? How did a poor family of German street traders become the creators of modern capitalism? How did Mayer and his sons establish an international banking dynasty? 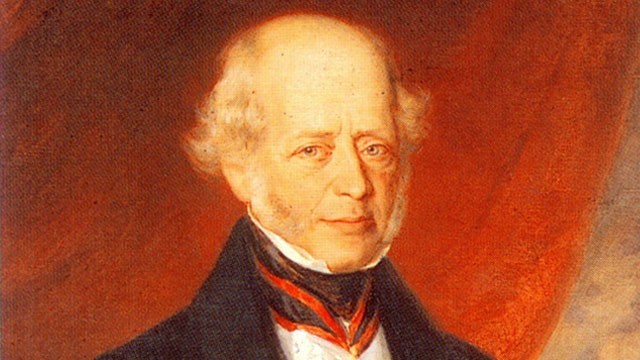 Mayer Amschel Rothschild, original builder of the family fortune, was born in 1744 in the "Judengasse", the Jewish ghetto of Frankfurt, one of eight children of Amschel Moses Rothschild and his wife Schönche Rothschild.   Mayer's father had a business in goods-trading of silk and currency exchange. He was a personal supplier of coins to Prince William of Hesse. The family home above the shop had a front wall only 11 feet wide, where more than 30 people lived at that time.

By the time Mayer was 12 years old, both of his parents were dead and he left rabbinical school and went to Hanover to learn finance. He worked as an apprentice at the firm of Wolf Jakob Oppenheimer, who provided credit to royalty and engaged in international trade, especially in bullion. Under the Oppenheimer's tutelage, Rothschild learned useful knowledge in foreign trade and currency exchange before returning to the family coin trade. Mayer was able to build upon his father's relationship with Prince William and make a decent income collecting and selling rare coins. It is this trade in coins that was the basis for the Rothschild fortune. Mayer was granted the title of Court Agent in 1769, which gave him more access to money making opportunities with other princely patrons.

Of course Meyer lived in the time when marriage came with a dowry from the bride's family. When he married Gutle Schnapper in 1770, he received a very generous dowry from her father.  The couple would go on to have 10 children – five sons and five daughters.

Eventually, Rothschild began providing banking services to Crown Prince Wilhelm, who would become Wilhelm IX, Landgrave of Hesse-Jassel in 1785.  Mayer made money off revolutions—both in countries and technology. During the French Revolution, Mayer profited by providing supplies for the Austrian army with coin from the British. He also was able to predict the upcoming industrial revolution and the potential to make money from it, so he became a large importer of English textiles.

Following the French Revolution, Mayer's business expanded rapidly when he handled payments from England for the hire of Hessian mercenaries. Soon Mayer was providing credit to his customers. This is where his fortune really started to explode. In 1795 his taxable income was 4,000 gulden. A year later, it was 60,000 gulden. 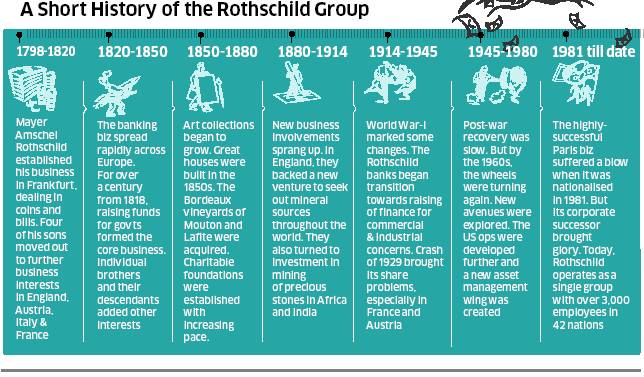 At the turn of the nineteenth century, Mayer made his move across the Continent, sending his five sons to establish branches of the family bank in the major European capitals. The Rothschild family coat of arms has an image of a fist clutching five arrows on it, which is a reference to Mayer's five sons. He sent them to Frankfurt, Naples, Vienna, Paris, and London. This would mark the beginning of the Rothchilds' worldwide banking dynasty.

But Mayer was worried about the family fortune being diluted through marriages. His will "barred female descendants from any direct inheritance."  This basically encouraged the women of the Rothschild family to marry within their family. Four of his granddaughters married his grandsons –their first cousins and one married her uncle.

Carl Rothschild was sent to Italy and founded CM de Rothschild & Figli in Naples where he had a very close and profitable relationship with the ruling de'Medici family. His daughter married his nephew, Nathan's son.

James Rothschild established the Paris branch of the family banking dynasty, De Rothschild Freres. The Paris branch was the one of the most successful of the family's banking branches due to James' close relationship with King Louis Philippe. The Paris location also helped the family's ability to operate across Europe. With this branch, they were able to profit from the opportunity of financing Wellington's armies in Portugal, requiring the sourcing of large quantities of gold on behalf of the British government, for a fee, of course. The house where James' and his niece/wife's children grew up is now part of the American Embassy.  James also purchased Chateau Lafite in the Bordeaux region of France, which is one of the best vineyards in the country and remains in the family to this day. 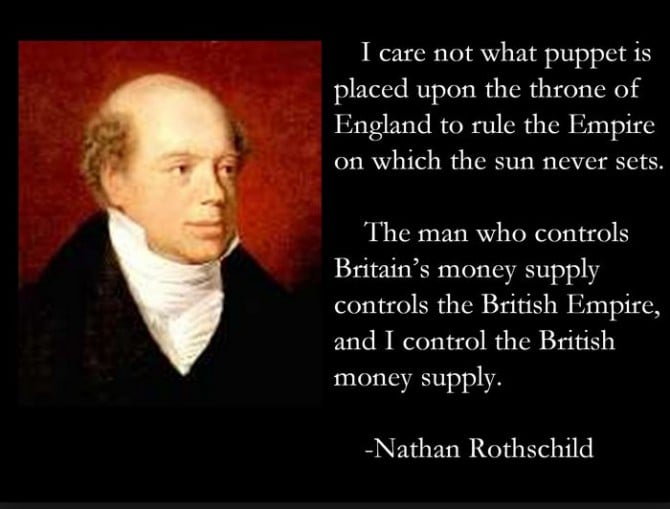 Nathan Rothschild was by far the most successful of the sons of Mayer with his London based NM Rothschild & Sons. His branch got its start from the former Prince William of Hesse, who'd ascended to the throne in 1785 but fled to Denmark after Napoleon invaded.  He entrusted Mayer with his fortune, and Rothschild funneled that money to Nathan in England. Nathan's savvy investments grew the Rothschild family's fortune using their King's money.

Nathan came up with the ingenious banking strategy of lending to governments during wartime and having the winner cover the loser's debt. Nathan used this tactic to fund Wellington's army in 1814 and it is the main reason for the enormous growth of the family's wealth in what turned out to be nearly 150 years of constant warfare. Waging a high-risk campaign of exchange-rate transactions, bond-price speculations, and commissions, the family garnered huge profits from this governmental financing.  In 1818, the Rothschild's wealth went from 500,000 pounds to 4,330,333 pounds in just ten years. The strategy was implemented across all the family bank branches.

Nathan was in a position to either make a ton or lose a ton on the outcome of the Battle of Waterloo. There is a centuries old urban legend that says he was the first to hear the news of Wellington's victory. It is said that he was stone faced upon hearing this GOOD news, as he had financed Wellington's army. What did he do? Nathan Rothschild went out and sold stock to trick others into thinking that Britain had lost the battle. When things settled down, he then had his agents go out and re-purchase that stock plus some at a discount, resulting in a hugely profitable day for the family.

For most of the nineteenth century, NM Rothschild was a branch of the largest bank in the world and dominated the international bond market.  To get a contemporary idea of the size and influence of the Rothschild family, there would have to be a merger between Morgan Stanley, Merrill Lynch, JP Morgan, Goldman Sachs, and the International Monetary Fund to even approach the size and influence of the money Rothschild owned banks controlled. Their control also had a stabilizing role on the finances of many governments.

The key to the Rothschild's domination was in their unity.  Mayer and his five sons ran independent branches across Europe that effectively acted as one firm. The Rothschild's also, more or less, created the international bond market when they began issuing foreign bonds in sterling. And then, as profits returned to the firm, they kept it all in the family by marrying within the family.

And yet, the Rothschild's could be vulnerable. They only survived The European Revolutions in 1848 because of a timely (and lucky) shipment of silver from their semi-independent agent in New York. That near disaster is the Rothschild's biggest strategic error and it was almost their undoing. They had no major U.S. operation.

The Rothschild family absolutely dominated international finance without ever stepping foot in the United States.

In the 1850s, the family began constructing grand homes around Europe, but were not unaffected by political tensions of the time. The Unification of Italy forced the closure of the Naples branch of the bank. The first generation of bankers died out in 1868 with the passing of Baron James, but the family continued the finance legacy in London, Paris, Frankfurt, and Vienna. As industrialization swept the globe, the Rothschild family became involved in mining stones in India and Africa and hunting for oil in Russia. One of the second-generation Rothschild, Edmond de Rothschild, began developing Jewish colonies in Palestine. The Frankfurt Rothschild's came to an end in 1901 as the result of not having a male heir.

World War I provided new business opportunities for the family, but the empire was hit hard by the financial crisis of 1929, particularly in Vienna. The family's holdings in Austria were brought under Nazi control in the late 1930s. The Rothschild Family's interests recovered by the 1960s and they began working on expansion to the United States. The new focus allowed for the branding of London's Rothschild Inc. and N M Rothschild & Sons. As of today, the family's banks employ close to 3,000 people globally. Here is a photo of the family's British castle, known as Waddesdon Manor: 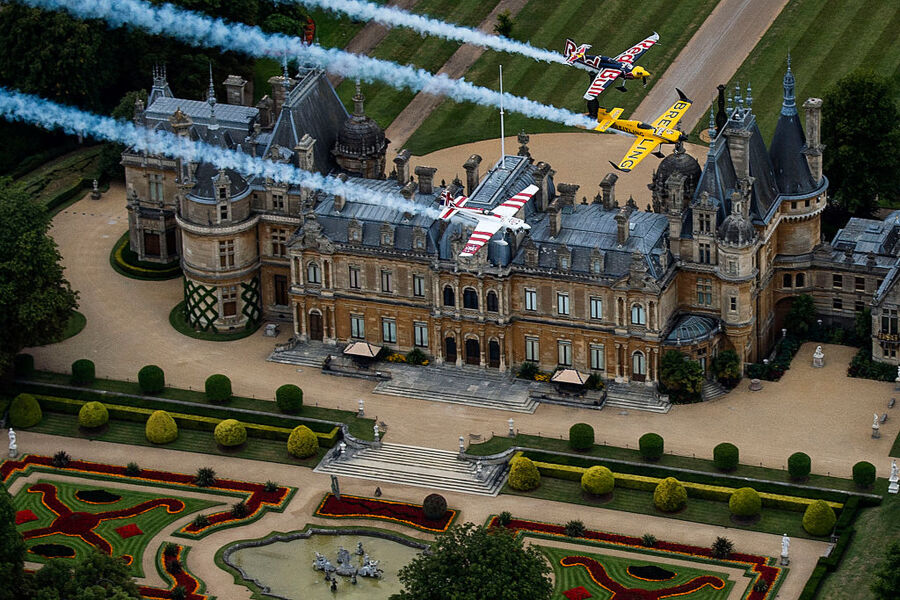 French and British Rothschild family members became known for their work as scientists and philanthropists. Baron Philippe de Rothschild (1902–88) became a premier winemaker of the vineyard Mouton-Rothschild. The Rothschild wine business is still successful to this day, with the Château Lafite-Rothschild 2005 Pauillac now retailing for almost $1,050 a bottle.

Today, the family empire is divided between direct descendants and outside shareholders, which is why – according to the Financial Times – it's difficult to tell how wealthy the actual family is. The Rothschild core global banking and private equity businesses are held by Concordia BV. First owned in equal shares by the English and French families, the company is now controlled by an entity called Paris Orléans.

Some people claim the Rothschilds empire today is worth trillions of dollars thanks to their vast interests in global currency debt, banking, real estate, art and sheer power. There are some people who go so far as to claim that the Rothschilds are the heads of a "New World Order" that controls the world's central banking system, were behind the 9/11 attacks, financed the communist revolution and own 99% of the world's news and media organizations.

As for specific members of the modern family, Sir Evelyn De Rothschild the British financier has a net worth of $20 billion. Jacob Rothschild another British investment banker has a net worth of $5 billion and, 41 year old Nathaniel Philip Rothschild is worth $1 billion. As a modern day  empire, the family's total net worth and assets combined have been estimated  to be in the $300 – $400 billion range. But it's truly impossible to get a completely accurate accounting of their wealth.