Rock Star, Pilot, PhD, Entrepreneur… Dexter Holland Of "The Offspring" Is The Real Life Most Interesting Man In The World

Dos Equis can have their silly fictional "Most Interesting Man" spokesperson. It turns out, the true most interesting person in the world is actually a real guy, and his name is Dexter Holland. You probably know Dexter as the lead singer of the band, The Offspring. His band released nine full-length albums (with number 10 in the works), sold more than 36 million copies of those albums, and had its music featured in multiple movies. But that's truly the tip of the iceberg when delving into the cool things Holland has done.

Bryan "Dexter" Holland was born on December 29, 1965 in Garden Grove, California. He was valedictorian of his graduating high school class back in 1984, and earned a BS in biology and an MS in microbiology from the University of Southern California. He was starting to earn his PhD, but by then, punk rock had come calling, so Holland put his doctorate on hold.

Holland formed Manic Subsidal (which would later become The Offspring) with his high school friend Greg Kriesel after seeing a show by punk band Social Distortion. Never mind the fact that neither of them had ever played their respective instruments – Holland on guitar and Greg K. on bass. They were soon joined by Ron Welty on drums and Kevin "Noodles" Wasserman as a lead guitarist. A fun side note about Noodles: he was working as a janitor at an elementary school during the band's early days, and initially joined the band because he was the only member old enough to purchase alcohol.

The band released a pair of records, The Offspring and Ignition before dropping Smash in 1994. That album, featuring big hits "Come Out and Play" and "Self Esteem," still holds the record for most sales of an album on an independent label.

Since then, The Offspring has released six more albums: Ixnay on the Hombre (1997), Americana (1998), Conspiracy of One (2000), Splinter (2003), Rise and Fall, Rage and Grace (2008), and Days Go By (2012). The Offspring are aiming to release a tenth album in the next year or two, and just recently brought "Coming to You" to radio stations. In traditional Offspring fashion, the music video is very untraditional: an underground fight club between clowns in full makeup.

Of those, the most commercially successful was Americana, which has sold 10 million copies worldwide and achieved 5x platinum status in the U.S. That disc includes the tracks "Pretty Fly (For A White Guy)," "The Kids Aren't Alright" and "Why Don't You Get a Job?"

That last one in particular is pretty fitting for Holland – not only does he have a job as a musician, he's done plenty of other things with his time, too. 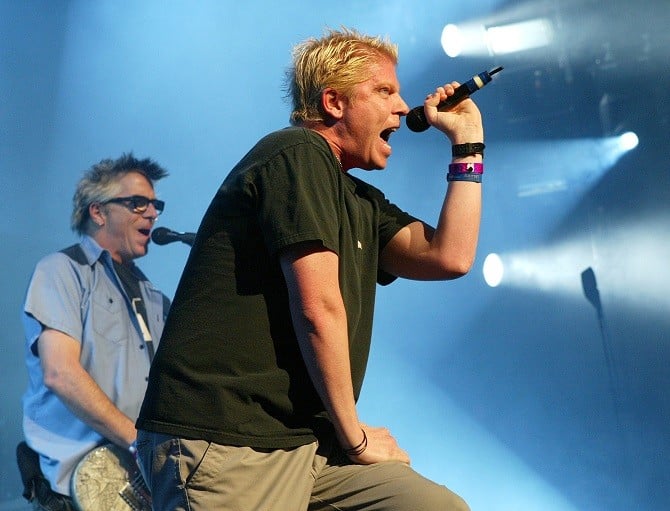 For starters, he's a licensed Airline Transport Pilot and Certified Flight Instructor. He owns at least three planes, including a Soviet-era fighter plane imported from Estonia, and another that turns the most heads: a sleek corporate jet with the anarchy symbol on the tail fin. He's landed his plane on four continents, and once made a solo trip around the world in ten days.

He also launched Gringo Bandito hot sauce in 2006; the bottles feature him wearing a sombrero, bandoliers, revolvers and sunglasses, and can now be found in stores throughout Australia, Japan, Canada, Finland, Germany, Belgium, Hungary and coast to coast in the U.S.

Holland claims that he was inspired after reading the label on a bottle of Tapatio, and had to see if he could do it better. To him, people who like hot sauce are a different kind of breed; they'll always have a bottle with them. It's simply a part of the way of life. Much like when he formed his band, he didn't know how to make or produce hot sauce. He simply learned along the way. And in 2014, Playboy named Gringo Bandito #1 on their list of best bottled hot sauces.

The rocker has also found himself in a number of films and documentaries, though his most memorable moment onscreen came in the 1999 horror comedy film "Idle Hands," starring Seth Green, Devon Sawa, Jessica Alba and Vivica A. Fox. In his cameo appearance, Dexter and his band are playing a concert when they're interrupted by someone crashing the stage. The lead singer naturally gets upset and confronts the offending party, only to have his scalp ripped off in cartoonish fashion. Seems fitting for someone who wrote a song called "Beheaded."

In 1994, after the huge success of Smash, Dexter co-founded Nitro Records. He re-released The Offspring's debut album through the company, and has produced CDs for other punk bands like AFI, The Damned, Guttermouth, T.S.O.L and The Vandals.

Holland is a big fan of collecting stamps from The Isle of Man, located in the Irish Sea between Great Britain and Ireland. Conveniently enough, he can fly himself there whenever he gets the urge to add to his collection.

Music runs in his family's blood, too. His daughter, Alexa Holland, is a singer-songwriter based in Austin, TX, and has released multiple albums while seeing her music get featured on shows like "Castle" and "One Tree Hill."

Jump to 2013, when Holland became a doctoral student at the Laboratory of Viral Oncology and Proteomics Research in the Keck School of Medicine. In March of 2013, Holland and a few other writers published a paper in the scientific journal PLoS ONE, titled "Identification of Human MicroRNA-Like Sequences Embedded within the Protein-Encoding Genes of the Human Immunodeficiency Virus." In more simple terms, this paper is looking at why HIV is so persistent (thanks to an evolution of the virus to self-regulate survival in the host), with the hopes of eventually finding a cure. Yep, the guy who routinely sings "I'm just a sucker with no self esteem" is now trying to find out how to rid the world of AIDS. And with his determination, it seems like anything is possible.

Rest assured, Holland is pretty fly. For any kind of guy.