By Paula Wilson on February 27, 2014 in Articles › Entertainment

There are lots of celebrity kids who ride their parents coattails to fame.  See the entire cast of "The Rich Kids of Beverly Hills" for an example.  Let's face it, 70% of the time, the children of famous people really have nothing going for them except the connections afforded them by their more talented parents.  However, 30% actually are genuinely talented, and some of them prove to be talented in ways that their parents are not.  Such is the case with Robin Thicke – the Canadian-American R&B star who also happens to be the son of actor Alan Thicke, of "Growing Pains" fame.  Robin Thicke managed to craft a very respectable career as a singer-songwriter without the support of his family.  His current net worth of $15 million, as well as this summer's breakout hit, "Blurred Lines", can attest to the fact that he has very much forged his own path.  Recently, however, the artist has been experiencing some ups and downs in both his career and personal life.  Strangely, these problems somewhat mirror his father's later woes.  Here's how the son of a Canadian sitcom star became one of the R&B world's secret weapons, and how his father's history just might be a predictor of his son's future.

Robin Thicke was born on March 10, 1977 in Los Angeles, California.  He is the son of actor and composer, Alan Thicke and actress-singer Gloria Loring, who is most widely recognized for her years on "Days Our Our Lives".  He has one older brother, who works primarily as a voice over artist.  His parents divorced when he was seven.  He knew he wanted to pursue a career in music early on, but his father discouraged it.  He was not especially interested in seeing his children enter the world of show business until they finished school.  However, Robin pushed on, and by age 14, he had attracted the attention of Al Jarreau and Brian McKnight.  Brian McKnight hired him to write songs, and their first collaboration, "Anyway", was featured on McKnight's album, "I Remember You".  Two years later, he signed a contract with Interscope Records, and midway through his senior year of high school, he decided to move out on his own.  He was making enough as a songwriter and producer to afford his own place.

Over the next several years, he would write and produce hit tracks for such artists as Brandy, Jordan Knight, Christina Aguilera, Brownstone, P!nk, Marc Anthony, and Mya, among many others.  He even penned one of the last tracks Michael Jackson recorded.  At the same time, he attempted to launch his own music career, performing as Thicke.  After the very moderately successful release of his first album in 2003, he changed labels, signing with The Neptunes' label, Star Trak.  His second album, "The Evolution of Robin Thicke" was released in 2006, and spawned multiple hit singles, including "Lost Without U".  "Lost Without U" eventually reached #1 on the Billboard R&B charts, making him the first white male to reach #1 on the R&B charts since George Michael.  With a new look and more soulful sound, he began to make a name for himself as a singer-songwriter.

By the time he released his third album in 2008, "Something Else", he had established himself as a burgeoning star.  The first two singles from the album were hits, and he followed up the release of the album by co-headlining a tour with Jennifer Hudson.  He released his fourth studio album, "Sex Therapy" in December of 2009.  This time he added more hip hop influences, and brought in Lil' Wayne to produce some of the tracks.  He released his fifth album, "Love After War" in 2011.  In 2013, he released "Blurred Lines", his sixth album.  The title track, "Blurred Lines" was a runaway worldwide smash.  Featuring a sound that hewed more closely to pop than R&B, the track was his most commercially successful yet.  It received three Grammy nominations, three MTV Video Music Award nominations, and four American Music Awards nominations.  The song has become one of the most popular singles of all time. "Blurred Lines" the single reached #1 on the Billboard charts in many countries and sold tens of millions of copies worldwide. 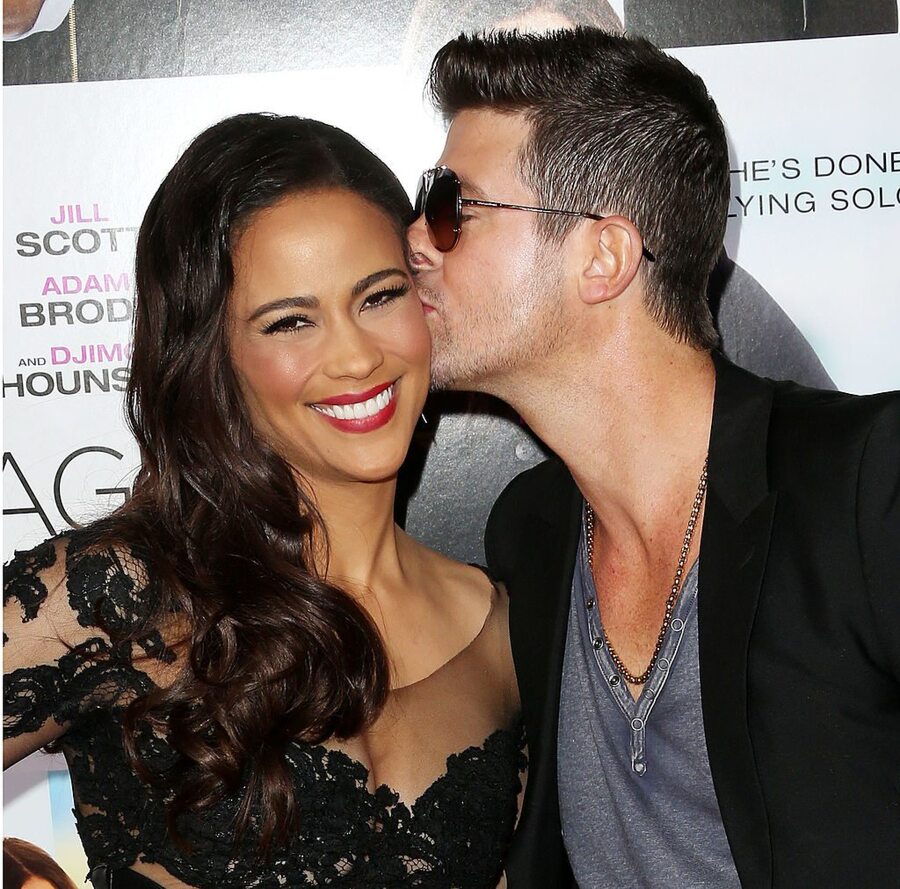 Within any massive success, controversy is soon to follow.  For Robin Thicke, the controversies have come fast and furious.  First he preemptively sued the estate of Marvin Gaye, because his track sounded so similar to one of Marvin Gaye's songs, "Got to Give It Up".  He readily admitted that "Got to Give It Up" was an influence for "Blurred Lines".  His reasoning was that if he sued Marvin Gaye and company first, they couldn't sue him for copyright infringement.  That backfired.  The court sided with the Gaye family.  Then everyone jumped on him about the lyrical content of the song and the racy music video that accompanied it.  Then came the now infamous MTV performance with Miley Cyrus that was just straight up… well… icky.  To make matters worse, photos appeared on line of him being "extra friendly" with someone who was not his wife.  This development baffled just about everyone, as his wife was the stunning actress, Paula Patton.  The pair had been a couple since they were sixteen and had one child together.  Their decision to separate was announced in late February 2014.

Alan Thicke, Robin's father, found his biggest fame with "Growing Pains", a program he began starring in just after he split with Robin's mother.  He married his second wife just after "Growing Pains" ended, but that relationship ended a few years later, during a lull in his career.  He remarried again in 2005.  "Growing Pains" is, by all accounts, his most successful project.  (He most recently appeared on "Celebrity Wife Swap", for example.)  Like his father and "Growing Pains", many people are pointing to "Blurred Lines" as Robin Thicke's one hit.  It raises questions.  Is his father's career a sign of his future?  Is he walking down the very path his father was hoping he would avoid?  Will he move beyond "Blurred Lines"?  Will he have a stable personal life? Or will we be watching him on a reality show, too, 20 years from now?  Only time will tell.