By Amy Lamare on February 22, 2019 in Articles › Entertainment

The New England Patriots are one of the most dominant teams of the last decade under coach Bill Belichick and quarterback Tom Brady. But back in 2000, no one would have predicted that the Patriots would rise to this level of dominance. After all, they had just selected a relatively unknown quarterback from the University of Michigan named with the 199th overall pick, in the sixth round of the NFL Draft. Looking back, I'm betting owner Robert Kraft had an inkling all the pieces were falling into place for his team. But how did he get rich enough to buy the team in the first place???

Robert Kraft has been a Patriots fan since they played in the American Football League. He's been a season ticket holder since 1971. He purchased the New England Patriots in 1994, saving the team from a move to St. Louis (and inadvertently taking the sole remaining NFL team in Los Angeles away as a result). But how did Robert Kraft, who now has a net worth of $6 billion dollars and is the eighth richest owner in the NFL get to the point where he had the money and wherewithal to buy his favorite team? 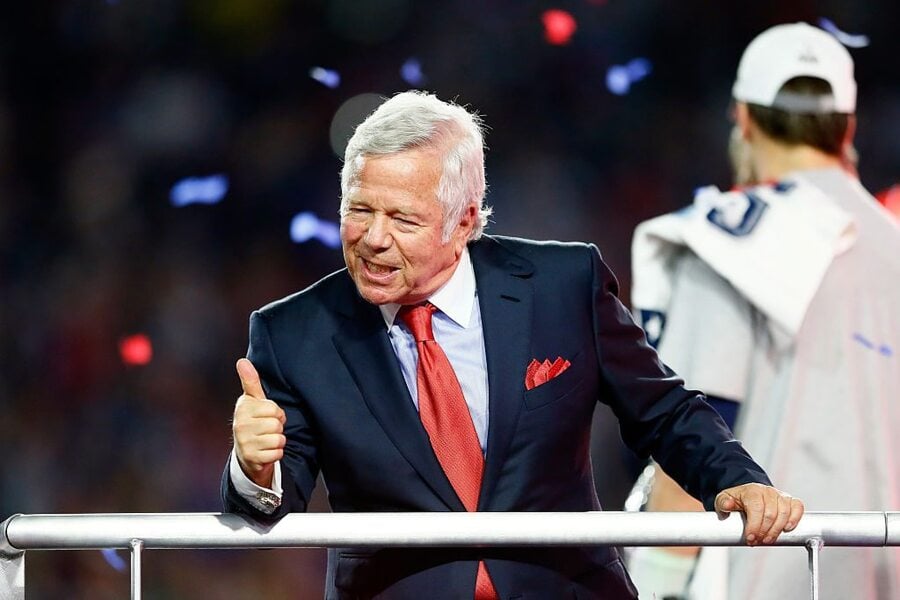 Robert Kraft was born in 1941 in Brookline, Massachusetts into a working-class Jewish family. He went to Brookline High School and attended Columbia University on a scholarship, where he was a member of Zeta Beta Tau fraternity. He graduated from Columbia in 1960, and went on to get his MBA from Harvard Business School in 1965. Kraft married Myra Hiatt in 1963, a full year before she graduated from Brandeis University.

Eventually, Kraft went to work for the Rand-Whitney Group, the Worcester-based packaging company of his father-in-law, Jacob Hiatt, where he still serves today as the company's chairman. Several years after that, in 1972, Kraft founded International Forest Products, a company that trades physical paper commodities, an activity closely related to that of his father-in-law's business. Combined, Rand-Whitney Group and International Forest Group make up the largest privately-held paper and packaging company in the US.

In 1985, Robert Kraft bought the parcel of land right next the Patriots' Stadium. This was the first in a series of steps that now appear to have been Kraft's master plan to own the New England Patriots. Step 2 came in 1988, when Kraft outbid a slew of competitors to buy the stadium, which at the time was in bankruptcy court for $25 million. As a condition of the purchase, Kraft also acquired the stadium's lease to the Patriots. This point is key, as it is an integral piece of Kraft's master plan to eventually purchase the team.

Does Robert Kraft Have Any Connection To Kraft Foods?

There is a popular misconception that Robert Kraft earned his fortune from grocery manufacturing conglomerate Kraft Foods. This is not at all true. Robert Kraft has absolutely no connection to Kraft Foods, which is known for products like Grey Poupon, A1, Gevalia, Planters, Jell-O, Kraft Singles, Velveeta, Kool-Aid, Cadburys, Oscar Mayer and Maxwell House. Kraft Foods was started in Canada in 1874, by an entrepreneur named James L. Kraft, who is in no way related to Robert, not even distantly. James moved his operations to Chicago in 1903, where he sold cheese door-to-door. The Kraft Cheese Company was listed on the Chicago Stock Exchange in 1924. It was listed on the NYSE in 1926. Today the company, which trades under the ticker symbol KRFT, has a market cap of $40 billion. But again, this company has nothing to do with this Robert Kraft. 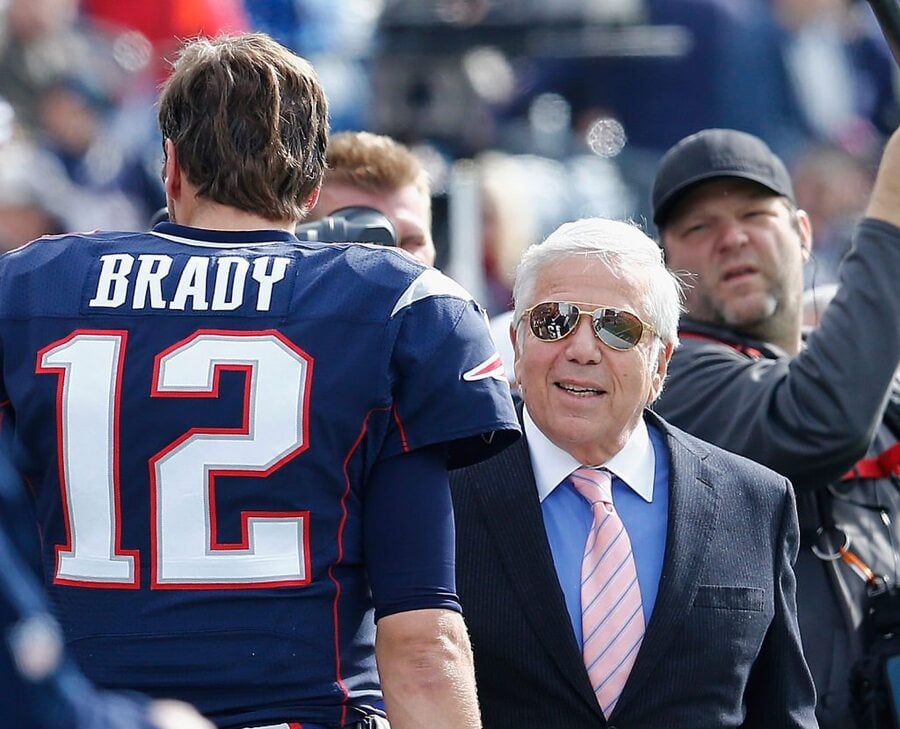 In 1992, a St. Louis businessman named James Orthwien bought the Patriots from a man named Victor Kiam. Orthwein's great-grandfather was Anheuser-Busch founder Adolphus Busch. At the time, James was the largest individual shareholder of Anheuser-Busch. He owned 1.6 million shares that were worth approximately $150 million. Victor Kiam had owned the Patriots since 1988 when he bought the team from team founder Billy Sullivan for $84 million. The sale did not include Foxboro Stadium which was owned by another party that was in the midst of bankruptcy proceedings. The obvious plan was for Victor Kiam to buy Foxboro, but at the last minute another investor won the auction. That last minute investor? Robert Kraft.

Owning the team but not the stadium turned into a financial mess for Victor Kiam. By 1992 he was facing personal bankruptcy. One of his creditors was James Orthwein, who struck a deal to forgive Victor's debts in exchange for the Patriots.

Over the next two years, rumors swirled across Boston that the Patriots were moving to St. Louis because it was well known that Orthwein wanted the NFL to return to his hometown. St. Louis had been without an NFL franchise since 1988 when the Cardinals moved to Arizona. He even had a new name picked out for the team: The St. Louis Stallions. There was just one problem: In order to leave Massachusetts, Robert Kraft would need to agree to allow the team to buy out the remaining years on their stadium's lease agreement.

James Orthwein offered Robert Kraft $75 million in 1994 to buy out the remainder of the team's lease at Foxboro Stadium had Kraft agreed. Robert Kraft saw an opportunity and seized it. He made a counter bid of $175 million–at the time a record for the NFL–to purchase the Patriots. This was a shocking amount of money to pay for a team that at the time was one of the least valuable franchises in the league. Knowing that getting out of the lease would be an insurmountable hurdle, Orthwein accepted the offer.

Jimmy Orthwein's dreams of St. Louis football may have been crushed, but at least he had $175 million to show for a two-year effort.

Kraft's purchase was embraced by Patriots fans. They showed their appreciation by purchasing nearly 6,000 season tickets, demonstrating to Kraft how thrilled they were he kept their team in New England. In fact, that season they sold out every game for the first time in the team's 34-year history. Since then, every single home game has been sold out, including pre- and post-season games. And in 1994, the Patriots ended up making the playoffs for the first time in eight years, on the strength of a seven-game winning streak at the end of the season.

Still, the drama for Patriots fans wasn't quite over. By 1999, a number of plans to improve the stadium and the area it resided in had failed, and Kraft began to explore moving his team to Hartford, Connecticut. Kraft reached an agreement with the Governor of Connecticut to move into a new stadium in downtown Hartford. It must be asked however, if this move was really going to happen, or was this just another wily move by Kraft to advance his own agenda? The pending deal re-opened negotiations with the Massachusetts legislators, who had originally refused to pay for a new stadium in Foxboro.

Eventually, and at nearly the last minute, the Massachusetts legislature approved subsidies that laid the groundwork for Gillette Stadium. The $350 million dollar stadium was privately financed by Kraft and opened in 2002. Since the opening of Gillette Stadium, the Patriots have been on one heck of a roll.

The Patriots played in Super Bowl XX in New Orleans in 1986, losing to the legendary 1985 Chicago Bears. This was the only Super Bowl the Patriots had been in, prior to Robert Kraft's ownership of the team. They had never won a Super Bowl. They'd also only made six playoff appearances in 33 years.

Under Kraft, the Patriots have made the playoffs 15 times in 20 years. They've been in 27 playoff games in those 20 years. In the team's first 34 seasons combined, they'd only been to 10 playoff games.

Side note: As if Robert's life wasn't awesome enough already, for the last three years, the 75 year has been dating a 36-year-old model/actress/dancer named Ricki Noel Lander. FYI, Ricki is 16 years younger than Robert's eldest son: 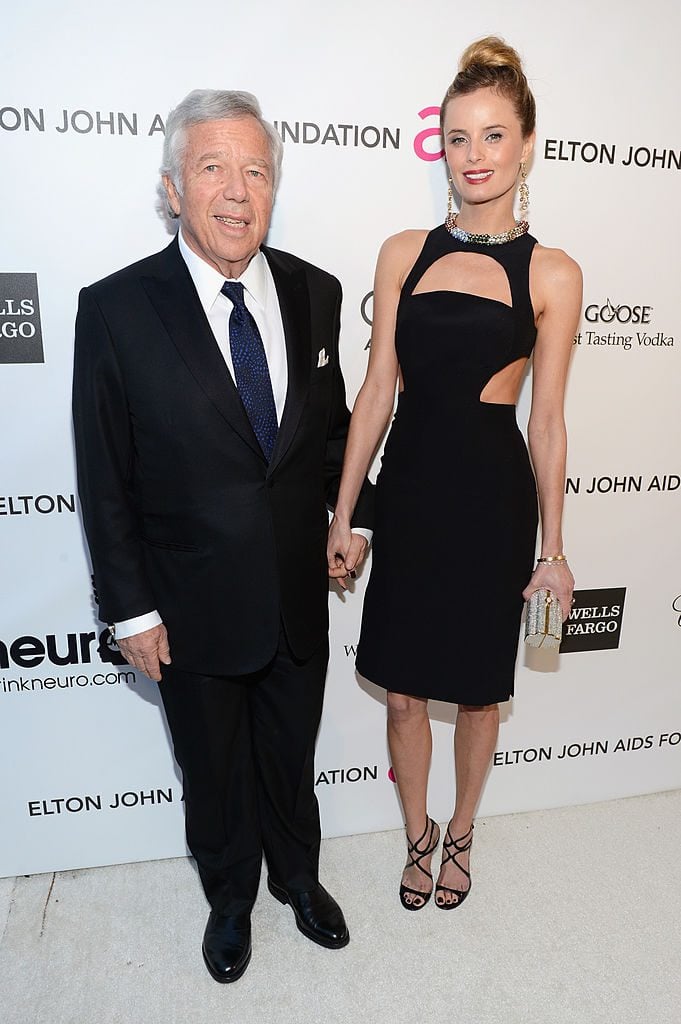 Under Kraft, the New England Patriots have won 14 AFC titles from 1996 to 2015 and they've been to seven Super Bowls between 1996 to 2015. They've won four of those Super Bowls including a victory over the Seattle Seahawks.

They say coaching makes a team great. That is true, there's no doubt about it. But in the case of the New England Patriots, ownership has clearly made them great. It's easy to see when you compare the team's history of success under owner Robert Kraft versus the many years of lackluster performance it delivered before the Kraft era began.